A.M. Stern’s Design for The Museum of the American Revolution Unveiled in Philadelphia 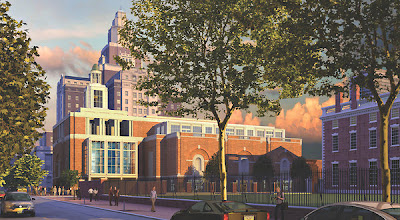 The museum, to be built at 3rd and Chestnut Streets, will house the original artifacts, manuscripts, rare books and works of art owned by The American Revolution Center, the non-profit educational organization that is building the museum. The museum will tell the full story of the American Revolution and explore its ongoing legacy, providing context to the many regional and national museums that present key aspects of our nation’s founding era.

Michael C. Quinn, President and CEO of The American Revolution Center said, “We could not be more pleased with the progress we have made as evidenced by the plans unveiled today and the inspiring challenge by Mr. Lenfest, our latter-day founding father. We hope many people will respond to his challenge grant and help us perpetuate the “Spirit of 76” with The Museum of the American Revolution.”

Robert A.M. Stern, Founder and Senior Partner of Robert A.M. Stern Architects, LLP, presented renderings of the new museum. Anchoring the eastern end of Independence National Historical Park, and set amidst architecturally and historically significant buildings, the Museum will carry forward the restrained Classicism that heralded the birth of our nation in a contemporary, environmentally sustainable way.

The Center’s Director of Collections and Interpretation, Dr. R. Scott Stephenson provided an overview of the Center’s collection that includes General George Washington’s marquee, historic firearms and edged weapons, personal items used during the War of Independence, printed works and manuscripts, and works of art.

The Center is embarked on a $150M capital campaign to raise funds to establish the museum. In addition to Mr. Lenfest’s $40M challenge grant, the Center has received a $30M matching grant from the Commonwealth’s Redevelopment Assistance Capital Program (RACP).

David McCullough, a Pulitzer Prize-winning author has said, “Establishing the Museum of the American Revolution is an immensely exciting and important project. The need for wider, deeper understanding of the Revolution, and respect for those who championed the cause at the time, has never been greater than now.”


About Robert A.M. Stern Architects, LLP
Robert A.M. Stern Architects, LLP has completed a number of buildings that present important themes in American history, including the Norman Rockwell Museum in Stockbridge, Massachusetts, and the Museum Center at the Mark Twain House in Hartford, Connecticut. The Museum for African Art on Museum Mile in New York City and the George Bush Presidential Center at Southern Methodist University in Dallas are currently under construction. In Philadelphia, the firm’s work includes Comcast Center and the McNeil Center for Early American Studies at the University of Pennsylvania. Robert A.M. Stern, FAIA, is a practicing architect, teacher and writer and has been the dean of the Yale School of Architecture since 1988. http://www.ramsa.com.

Joe Kleimanhttp://wwww.themedreality.com
Raised in San Diego on theme parks, zoos, and IMAX films, InPark's Senior Correspondent Joe Kleiman would expand his childhood loves into two decades as a projectionist and theater director within the giant screen industry. In addition to his work in commercial and museum operations, Joe has volunteered his time to animal husbandry at leading facilities in California and Texas and has played a leading management role for a number of performing arts companies. Joe previously served as News Editor and has remained a contributing author to InPark Magazine since 2011. HIs writing has also appeared in Sound & Communications, LF Examiner, Jim Hill Media, The Planetarian, Behind the Thrills, and MiceChat His blog, ThemedReality.com takes an unconventional look at the attractions industry. Follow on twitter @ThemesRenewed Joe lives in Sacramento, California with his wife, dog, and a ghost.
Share
Facebook
Twitter
Linkedin
Email
Print
WhatsApp
Pinterest
ReddIt
Tumblr
Previous articleNational Center for Civil and Human Rights Unveils Building Design
Next articleAll Three Smithsonian IMAX Theatres to Run Dark Knight Rises; Hollywood Blockbuster Filmed with IMAX Cameras