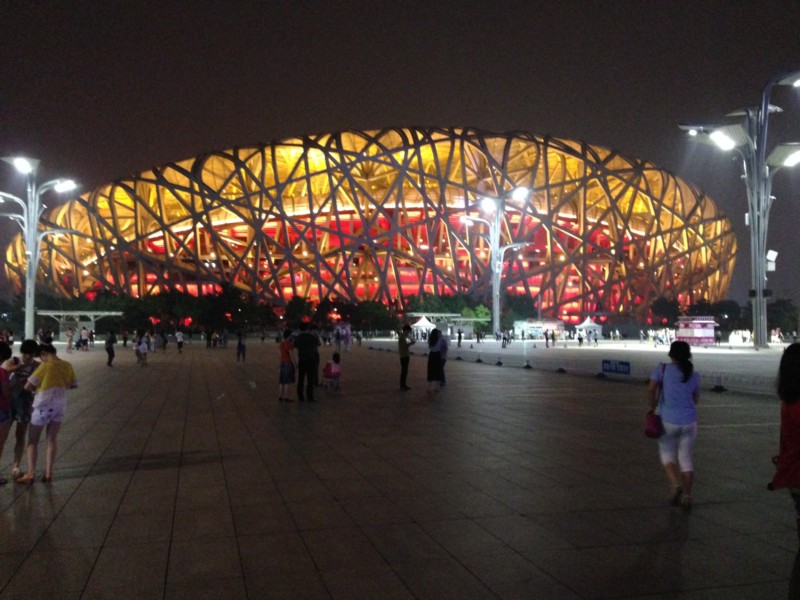 With 9,000 participants, the 2014 Asian Attractions Expo (AAE) in Beijing broke records. That figure includes 6,500+ buyers from more than 70 nations and regions around the globe, and represents growth of about 67 percent over last year’s annual gathering in Singapore, according to the organizer, IAAPA, (International Association of Amusement Parks & Attractions) leading trade organization for our industry. IAAPA also hosts the annual Euro Attractions Show (EAS), next coming up in Amsterdam Sept 23-25.

Justifying the impressive numbers, AAE pointed to interesting new trends and products specifically emerging out of the Asian market.The Asia Pacific region is “the fastest growing part of the attractions industry,” as observed by IAAPA President and CEO Paul Noland during the rousing opening ceremony. It’s also a region where the leaders can surprise you with their range of accomplishments. IAAPA Chairman Mario Mamon brought a group of talented singers from Enchanted Kingdom to perform “One Voice.” with Mamon and his wife Cecilia taking the lead vocals. Afterwards, Mamon announced the 2015 IAAPA Leadership Conference would be held in Dubai March 10-12, in what could be taken as an affirmation of returning activity in the Middle East markets. 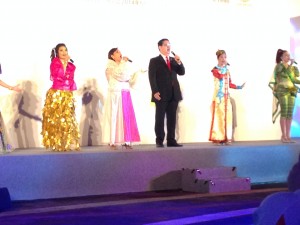 The opening ceremony highlighted, culturally, that this was IAAPA’s first foray into Beijing. According to Mamon, its being the seat of government in China made Beijing seemed like a natural choice, with many buyers having offices nearby and world-class facilities available for attendees to explore.

Still, IAAPA is committed to moving the Asian Attractions Expo around the region, with 2015’s show announced for June 16-19 in Hong Kong, which draws from a more South China region.

Andrew Lee, IAAPA Vice President for Asia Pacific Operations, explained some of the trends that have emerged in the course of the association’s activities in the region, that reflect not only on the Chinese market, but on Asia as a whole. Specifically, there are three trends to watch for:

Mario Mamon agreed, adding that China has wealth, land and a vast history, so they naturally take the lead in development and culture.

Naturally, development in China comes with challenges. Two specific areas that can become particularly complicated, according to Lee, are rules and regulations, and environmental and sustainability issues.

Noland further observed the need to attract operations talent. “Parks start off as real estate developments but they become operating entities that need talented people to run them,” he said.

Still, Mamon feels the challenges are not insurmountable.

“You are going into the fun business, but behind the fun there is a lot of blood, sweat and tears involved to make your dream a reality that hopefully sustains to the next generation,” said Mamon.

Many parks in the region are designed as part of residential developments, in part to benefit from government incentives. But the trend hasn’t been around long enough to gauge its success, and opinions are split.

“It’s a risky proposition, because residents will not go to the parks every day,” said Mamon. “The scale and proportion of the venues will be important for that model to be successful.”

Good planning combined with population density would help minimize the risk, based on Noland’s remark that, “Since parks tend to draw from a two-hour travel radius, it doesn’t seem too particularly risky.”

With all the talk about park development, it seemed like IAAPA was focusing exclusively on park development in the Asian market, and not the other attractions sectors IAAPA represents, such as museums, Family Entertainment Centers (FEC), casinos, etc. Andrew Lee explained that it isn’t that IAAPA does not want to pursue those other markets, but specifically in China, the government owns almost all the cultural attractions, making them much less likely to get involved in the association.

Additionally, there really is no concept of an FEC in China. The idea of an arcade is not a family location. And so, for now, IAAPA will continue to focus on the massive growth in the Asian theme park and waterpark markets.

From the Show Floor

The sold-out trade show floor featured exhibitors from around the world. Busy all three days, several exhibitors took some time to share the latest products and projects reaching the market.

Birket Engineering
Joe Fox introduced us to the company’s new Firelinx product, a pyrotechnics control system that introduces a new level of safety – to the point that continuity tests can be completed while technicians are working in proximity to the fireworks. The system went through additional testing over the Independence Day holiday (USA) and is expected to be installed at a major Orlando theme park this fall.

WhiteWater West
The much-anticipated Slideboarding concept from this leading supplier to water parks now has a prototype. Denise Weston of the company’s Apptivations arm showed off the riding device, which looks more like a boogie board than a raft. “I refuse to use an inner tube,” said Weston. “I want you to feel like you are boarding, or going down a luge.” 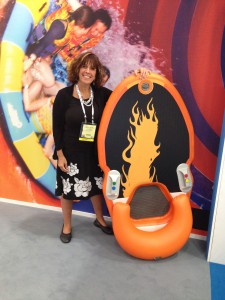 WhiteWater is currently in the third testing sequence for the concept, which is, as Weston said, “all about the thrill, and also about the skill.”

Weston announced that the company is hoping to have a live demo for industry professionals before the end of the year.

Attraktion!
Officially the party booth of AAE, Attraktion! bordered between being a night club and an exhibit booth. It was all business when Attraktion! and Intamin announced their partnership to bring the Dome Ride Theater to Lewa Wonderland in Xian, China. Read InPark’s exclusive coverage of the announcement and attraction details.

MediaMation
Shawn Forgaard talked about the company’s motion theater seats, which are becoming popular in feature film cinemas. The company currently has installations in Russia, Oman, Columbia, and now the USA. Seats in Oxford, California were expected to open by July. According to Forgaard, the seats typically garner a USD $7-10 premium price over a standard ticket. 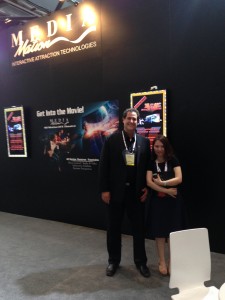 Triotech
Triotech’s Christian Martin was busy showing guests the company’s IDR dark ride vehicle, which was one of the floor’s more popular experiences. The attraction, which was in development for two years, was unveiled in Orlando at IAAPA 2013. 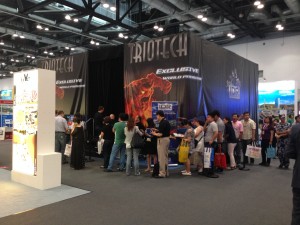 Triotech powers the media, motion and game play for the IDR, and works with other vendors such as ETF and Zamperla to provide the vehicles and track.

“China is a huge market for us,” explained Martin. “So many parks and attractions are being built. As an example, Audi is selling a lot of cars here and it’s the same situation for us. There are a lot of buyers here.”

FUNA International
Scott Arnold showed InPark information on the company’s recently completed integrated audio system for Chimelong park. The park’s parade route (which happens to be the world’s longest) is part of the audio system, and automatically transitions music based on the float moving through each area. The floats can be in any order or left out as needed. Although it isn’t utilizing any specifically new technology, it does apply current technology in new ways to create the virtually autonomous system. According to Project Manager David Clina, “It’s pure FUNA magic!”

The audio system is prepped for further advances in technology by being built on a fiber backbone. All the networking gear follows industry standards and can be changed out as new tech is created, without having to dig up sidewalks, explained Arnold. Read more about FUNA

Alterface
Announced to the industry at AAE, Alterface will be partnering with Ubisoft to produce a dark ride gaming experience based on the “Rabbids” game and TV show franchise. The attractions will take advantage of Alterface’s 4D Shooter HD (which stands for Hi Definition AND Head Detection). This means that it will appear to players that the objects they are shooting (in this case, toilet plungers, “deboucher” in French) are emanating from the device on their car. It’s a next generation system that Alterface’s Benoit Coronet says improves accuracy for the player as well as realism. 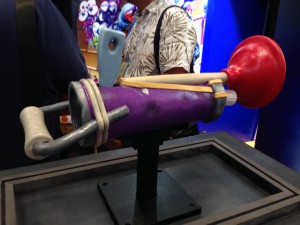 The Rabbids brand already has a dark ride at Futuroscope park, but this will be the first interactive game style to be partnered with the IP.