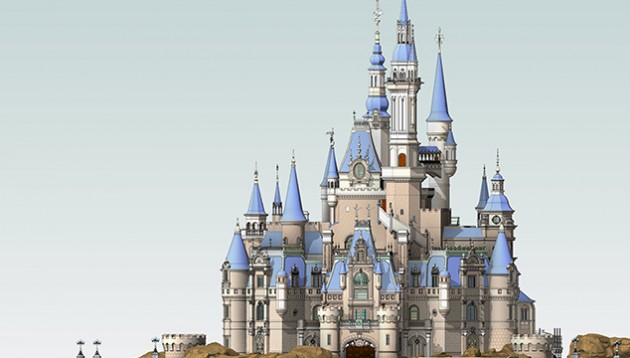 [quote]As construction of the Shanghai Disney Resort continues on its theme park and associated facility development, we’re constantly defining and redefining themed entertainment with innovation, and we do that not just in the technology behind our attractions, but also in the way we design and develop them.” — Howard Brown, SVP and Project Development Executive, Walt Disney Imagineering Shanghai[/quote]

Shanghai, China — A prestigious professional honor was recently awarded to recognize the innovative design and technology practices that have been used in the development of Enchanted Storybook Castle, currently under construction as the centerpiece of Shanghai Disney Resort’s theme park, Shanghai Disneyland. The American Institute of Architects presented its Technology in Architectural Practice Award to Walt Disney Imagineering for its successful implementation of Building Information Modeling, the process of generating and managing digital representations of structures and facilities.

“The Enchanted Storybook Castle is designed with retail, dining, operations and theatrical spaces, and a ride system running through it which marries traditional architectural detailing with modern building technology. It would be hard to imagine designing and building such a complex structure without having one integrated, central, smart model like Building Information Modeling,” said Howard Brown, Senior Vice President and Project Development Executive, Walt Disney Imagineering Shanghai.

“Our commitment to collaboration, teamwork, and mutual success enables us to create those magical, innovative experiences in a way that only Disney can do,” said David Van Wyk, WDI project management and integration executive. “When the whole organization is thinking about reinforcing each other’s efforts, it allows individuals the ability to focus on what they need to do to accomplish our shared goals. By using BIM processes and technology on this and other projects to be built around the world allow us to work smarter and more efficiently as a team.”

Building Information Modeling (BIM) is a digital representation of physical and functional characteristics of a facility. A BIM is a shared knowledge resource for information about a facility forming a reliable basis for decisions during its life-cycle; defined as existing from earliest conception to demolition.

The use of parametric BIM components in a native 3D workspace allowed for a quick update to the Castle’s stair and window heights. For example, testing a design option for a new monumental staircase integrated with the exterior building envelope was completed in approximately two hours as opposed to several days.

The intelligent BIM model allowed designers to quickly redesign by hand, update the model, and then generate new backgrounds for additional hand sketching and design.

Building geometry with parametric control allows the design to be easily adjusted without rebuilding the component multiple times. Each adjustment now takes several minutes instead of several days, as almost none of the previous modeling effort is wasted.

The material attributes assigned to all geometry in the BIM model allows the team to quickly color the model and visualize material types. This helps to inform the work of third-party vendors, the contractor, project estimators, and architects.

Traditional 2D documents are difficult to understand, especially for those without engineering, architectural, or construction backgrounds. The BIM model allows a complete version of the castle to be visualized during design reviews.

Partnering with the Shanghai Disneyland park operations team, Walt Disney Imagineering Shanghai was able to use the BIM model for crowd simulation studies. Since the space was realistically modeled, the Shanghai Disneyland park operations team was able to determine accurate instantaneous demand for all the spaces within the building, as well as determine any pinch points in the design.

Special software was used to transfer updates to the BIM model back and forth between the U.S. and China which enables 142 disciplines – each with its own team from local design institutes (LDI), the Walt Disney Imagineering Shanghai field office, and vendors in Shanghai, design consultants, Shanghai Disneyland’s operation teams and Walt Disney Imagineering in the United States to work on opposite sides of the globe to design the project.

Joe Kleimanhttp://wwww.themedreality.com
Raised in San Diego on theme parks, zoos, and IMAX films, InPark's Senior Correspondent Joe Kleiman would expand his childhood loves into two decades as a projectionist and theater director within the giant screen industry. In addition to his work in commercial and museum operations, Joe has volunteered his time to animal husbandry at leading facilities in California and Texas and has played a leading management role for a number of performing arts companies. Joe previously served as News Editor and has remained a contributing author to InPark Magazine since 2011. HIs writing has also appeared in Sound & Communications, LF Examiner, Jim Hill Media, The Planetarian, Behind the Thrills, and MiceChat His blog, ThemedReality.com takes an unconventional look at the attractions industry. Follow on twitter @ThemesRenewed Joe lives in Sacramento, California with his wife, dog, and a ghost.
Share
Facebook
Twitter
Linkedin
Email
Print
WhatsApp
Pinterest
ReddIt
Tumblr
Previous articleKelly Ryner Relocating to Beijing as Newly Appointed President of Thinkwell Asia
Next articlePolin Awarded for Two Waterslides as Best in Europe During European Star Awards