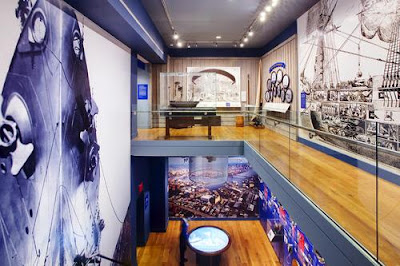 The BNYC showcases the history and innovation of the Brooklyn Navy Yard where many warships – including the Civil War’s famous U.S.S. Monitor – were built and which today serves as model of industrial re-use and green manufacturing. The space occupies former naval officers’ quarters and offers interactive and conventional exhibits, videos and artifacts.

Design/build integrator Videosonic Systems, Inc. worked with museum designer Robin Parkinson to help communicate the ideas contained within the design package. “We’ve had a lot of success with Alcorn McBride products over the years,” says Glenn Polly, of Videosonic. “They’re a well-known staple for museums thanks to their bullet-proof performance and reliability.”

Videosonic senior project manager/programmer Eugene Ababio notes that “the Brooklyn Navy Yard has a pretty solid history and a lot to say” in the BNYC. “Our priority was to make sure we could provide technology that would not hinder the storytelling process.”

He points out that in an exhibit-type installation, “all the devices are critical components and at the BNYC all those devices were Alcorn players. That said, you might think you’d spend most of your time testing and troubleshooting ‘til close out. But not with Alcorn. The units were very powerful products yet simple to set up and manage.”

The ground floor of the BNYC features a photo montage comprised of five 46-inch Samsung displays driven by five Alcorn McBride DVM-8400 Digital Video Machines. Each display contains a motion detector so when visitors approach they trigger the story of the photo showcased. Focused audio is provided via soundtrap-housed speakers and Alcorn McBride AM4 Digital Audio Machines. All of the playback equipment is located in an IT server room back of house.

Ababio reports that Alcorn McBride’s tech support throughout was “excellent. I’ve worked with a lot of AV gear for the last 15 years, and it’s impossible not to run into situations where you need help from tech support. Unfortunately, sometimes it’s difficult to find more than a few technicians who know their products inside out. I never had this issue with Alcorn; everyone I spoke with had an excellent understanding of their products and was able to offer instant solutions.”

He adds that the Alcorn McBride products easily supported the multiple content providers contracted by the BNYC. “The project incorporated a number of content providers who didn’t all use the same technology. Thank goodness, Alcorn supports all the major file formats and compression rates. It was a relief for the content providers to hear us say, ‘Yeah, we can support that.’”

Southside Design’s Sam Morse was the exhibit fabricator for the BNYC.

About Alcorn McBride
Founded in 1986, Alcorn McBride is the leading manufacturer of show control, audio and video equipment for the themed entertainment industry, and a rapidly growing provider of audio and video systems for retail environments and transportation applications. Staffed by some of the industry’s best engineers and backed by outstanding customer support, the company has demonstrated great agility in bringing new designs to market. A hallmark of Alcorn McBride products is their durable, zero maintenance design. The company’s products provide consistent, reliable operation for audio and video playback applications worldwide. For more information, visit www.alcorn.com.

Joe Kleimanhttp://wwww.themedreality.com
Raised in San Diego on theme parks, zoos, and IMAX films, Joe Kleiman would expand his childhood loves into two decades as a projectionist and theater director within the giant screen industry. In addition to his work in commercial and museum operations, Joe has volunteered his time to animal husbandry at leading facilities in California and Texas and has played a leading management role for a number of performing arts companies. Joe has been News Editor and contributing author to InPark Magazine since 2011. HIs writing has also appeared in Sound & Communications, LF Examiner, Jim Hill Media, and MiceChat. His blog, ThemedReality.com takes an unconventional look at the attractions industry. Follow on twitter @ThemesRenewed Joe lives in Sacramento, California with his fiancé, two dogs, and a ghost.
Share
Facebook
Twitter
Linkedin
Email
Print
WhatsApp
Pinterest
ReddIt
Tumblr
Previous articleSix Flags Great America Opens X Flight
Next articleSmart Monkeys Provides Super Show Control at Daily Planet