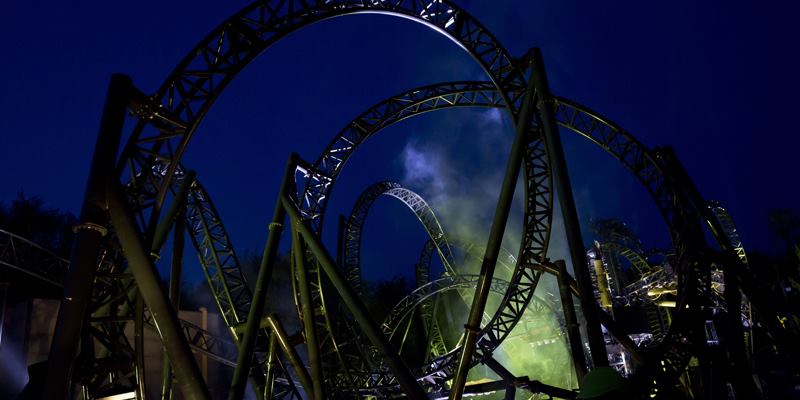 The Sanctuary is a medical facility, established in the 1950’s by the Ministry of Joy, the same organisation associated with The Smiler. The Sanctuary was criticised for its questionable and somewhat forceful methods of happiness enforcement; however in 2012 the doors were opened accepting new patients for important trials ahead The Smiler’s launch in 2013!

This Scarefest The Sanctuary will open its doors again, dare you follow the screams of rejuvenation and the stench of joy? Book your appointment, as the Doctor will see you now.

The Carnival of Screams:

Do you remember your first trip to The Carnival? The moment you walked through those wondrous gates and the sweet smell of buttered popcorn would fill the air? The colourful lights would dazzle you into a state of joyous hypnosis and all that could be heard were the gasps of shock and excitement? Do you remember the knife thrower, for whom people would travel from miles around to see his spectacular performance?

Do you remember when it all went wrong?

10 years on, you can hear the famous carnival music once again as it reopens its gates for their acts to perform after many years in isolation when the carnival closed following the horrific incident when Jack Nife’s final and most deadly blade missed its all important target!

After many years of practice and preparation in the delusional confinement of the carnival tent, all the circus acts are ”rejuvenated” ready to restore the ‘GREATEST SHOW ON EARTH’ status.

Terror of the Towers: What Lies Within:

Footage was recovered after two urban explorers broke into the infamous Alton Towers ruins. Their whereabouts is currently unknown; however, rumours suggest that a darker force is at work. You now have the opportunity to follow their footsteps and discover the chilling terror of what lies within.

The undead are roaming the earth and your only route to safety is through a military restricted zone. What seems to be an abandoned road soon reveals a much more horrific presence. Will you make it through to containment?

Brave your way through this post-apocalyptic nightmare and pray you make it out safe through to the other side.

Joe Kleimanhttp://wwww.themedreality.com
Raised in San Diego on theme parks, zoos, and IMAX films, InPark's Senior Correspondent Joe Kleiman would expand his childhood loves into two decades as a projectionist and theater director within the giant screen industry. In addition to his work in commercial and museum operations, Joe has volunteered his time to animal husbandry at leading facilities in California and Texas and has played a leading management role for a number of performing arts companies. Joe previously served as News Editor and has remained a contributing author to InPark Magazine since 2011. HIs writing has also appeared in Sound & Communications, LF Examiner, Jim Hill Media, The Planetarian, Behind the Thrills, and MiceChat His blog, ThemedReality.com takes an unconventional look at the attractions industry. Follow on twitter @ThemesRenewed Joe lives in Sacramento, California with his wife, dog, and a ghost.
Share
Facebook
Twitter
Linkedin
Email
Print
WhatsApp
Pinterest
ReddIt
Tumblr
Previous article
Chessington World of Adventures – Halloween Hocus Pocus
Next article
Tokyo DisneySea – Disney’s Halloween