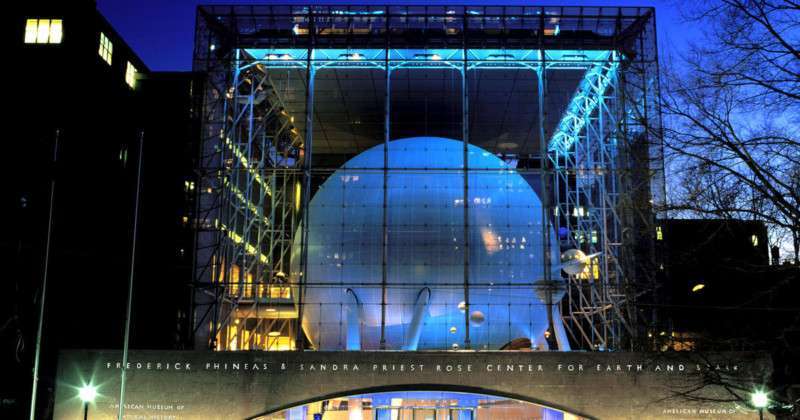 We attended a special briefing at the American Museum of Natural History (AMNH) on July 17, 2019 to mark the 50th anniversary of the historic Apollo 11 Moon landing featuring experts from the Museum’s Astrophysics and Earth and Planetary Sciences departments.

The briefing began in the revitalized Arthur Ross Hall of Meteorites, and concluded in the newly state-of-the-art Hayden Planetarium. The Hall of Meteorites tour spotlighted three moon rocks and a newly acquired lunar meteorite sample. The tour was led by Denton Ebel, curator, Department of Earth and Planetary Sciences at AMNH. Other AMNH speakers at the July 17 briefing included Ellen Futter, President, and three more members of the Department of Astrophysics: senior scientist Jackie Faherty, curator Michael Shara and assistant curator Ruth Angus.

Following the Hall of Meteorites, we moved into the Hayden Planetarium for a preview of programming for the Museum’s July 20 SpaceFest event on July 20 – a series of presentations and activities marking the Apollo 11 anniversary, and also a part of the Museum’s 150th anniversary celebration.

These two historic anniversaries provided an ideal occasion for introducing the most advanced planetarium in the world. Attendees of this event witnessed the premiere of the Hayden’s new, custom display system, the result of a five-year collaboration between AMNH and Christie – a high dynamic range (HDR) system featuring the first six Christie Eclipse RGB pure laser projectors.

The screening in the Hayden featured a data-driven recreation of the Apollo 11 and Apollo 17 missions in the Hayden Planetarium dome. The display enabled the live presenter to take us on a 15-minute moon landing journey. We explored the moon’s surface, recapped the moon landing and viewed historic images with rich detail, color and contrast. Navigation was real-time using the open-source content system openspaceproject.com.

The prestigious Hayden at AMNH is one of the world’s leading planetariums, and with 500,000 annual visits, AMNH is one of New York’s most-attended museums – second only to the Metropolitan Museum of Art – and the 10th most-visited museum on planet Earth. (Reference: 2018 TEA/AECOM Theme Index and Museum Index.) With this new display system, the Hayden stays at the forefront of presentation technology and accesses superior tools to serve its educational and scientific mission. The Hayden planetarium Space Theater dome is 87 feet in diameter and has 429 seats with an in-the-round configuration. The Hayden opened in 2000 as part of the Rose Center for Earth and Space within AMNH. The planetarium occupies the top half of a sphere that appears to float inside a glass cube, as shown in the photo at top. In addition to the new digital fulldome projection system supplied by Christie, the Hayden has a classic Zeiss starball projector, a custom Mark IX.

A statement provided by Christie reads: “Guests visiting the Space Theater can now see the universe at a level of detail that has never been seen in a dome or planetarium. With true high dynamic range, Christie Eclipse is capable of more than a 20M:1 contrast ratio, and, combined with the expansive Rec. 2100 color palette, guests can observe stars and galaxies in the finest detail. Christie Eclipse reproduces true blacks with bright star points without any unwanted residual light levels as well as simultaneous deep, rich, highly saturated colors that is unprecedented in a planetarium or display environment. Through close collaboration with the Hayden over many years, Christie has developed a groundbreaking projection solution capable of immersing guests in an unmatched visual experience through the cosmos.”

On hand at the briefing to talk about the new display system were Benjy Bernhardt, senior director, Electronic Media Engineering and Support, AMNH, and two Christie representatives: Larry Howard, Director of Sales, Entertainment (AMERICAS) and Larry Paul, Executive Director – Technology and Custom Solutions Enterprise and Entertainment. Paul, who is product manager of the new Eclipse, said the name was inspired by a real-life high contrast event, the total solar eclipse of 2017. He noted that the projectors are true 4K, and that they are currently configured for 60 frames per second but can be upgraded to 120 fps.

Paul also drew our attention to the Rec. 2100 color space facilitated by the new projectors – a color gamut that goes beyond even the Rec. 2020 milestone of Christie’s very recently rolled out RGB laser models, the D4K40-RGB and the Mirage-SST.

The Hayden is currently in production on a new show that will make the most of the new system’s features and is expected to premiere in January 2020. Paul said, “Their current show was produced at 30 fps in SDR but the new show in production, which is expected to be released in early 2020, will not only be created at 60 fps but most significantly specifically mastered on and for the new true HDR Hayden planetarium projection system. It will immerse guests in an experience that has never been possible or been seen before.”

Most emphatically, both Paul and Bernhardt stressed the darks. “With this system, black is now true black,” said Paul. “We’ve left ‘video black’ behind.”

“This is the spec we have all had in our heads for quite some time,” said Bernhardt.

Judith Rubin
Judith Rubin ([email protected]) is a leading journalist, publicist, strategist, blogger, content marketing specialist and connector in the international attractions industry. She excels at writing about all aspects of design and technical design, production and project management. Areas of special interest include AV integration and show control, lighting design and acoustics, specialty cinema, digital video and world’s fairs. Judith has ties to numerous industry organizations. From 2005-2020 she ran communications, publications and social media for the Themed Entertainment Association (TEA). In 2013, she was honored with the TEA Service Award. She was development director of IMERSA, and co-chair of the 2014 IMERSA Summit. She was publicist for the Large Format Cinema Association in the 1990s, now part of the Giant Screen Cinema Association (GSCA) and has also contributed to the publications of PLASA, IAAPA and the International Planetarium Society. Already making her mark as a magazine and book editor, Judith joined World’s Fair magazine in 1987, which introduced her to the attractions industry. Launching as a freelancer in the mid 1990s she has contributed to dozens of publications and media outlets including Funworld, Lighting&Sound America, Sound & Communications, Urban Land, The Raconteur and The Planetarian. She joined InPark in 2010. Judith earned a Bachelor of Fine Arts from Pratt Institute. She has lived in New York City and the San Francisco Bay Area, and now makes her home in Saint Louis, where she is active in the local arts and theater community.
Share
Facebook
Twitter
Linkedin
Email
Print
WhatsApp
Pinterest
ReddIt
Tumblr
Previous articleSaint Louis Science Center prepares for complete overhaul of OMNIMAX Theater featuring Imax with Laser
Next articleVlad Corp bringing FlyOver Canada to Toronto and new geothermal lagoon to Iceland