Beverly Hills, CA, USA — The Academy of Motion Picture Arts and Sciences announced that it has reached its initial goal of $100 million toward a $250 million capital campaign to fund the upcoming Academy Museum of Motion Pictures. Concurrently, the Academy unveiled its vision for the first major U.S. museum dedicated exclusively to the history and ongoing development of motion pictures. Designed by award-winning architects Renzo Piano and Zoltan Pali, the non-profit museum which will be located in the historic May Company Wilshire building in Los Angeles, is slated to open in 2016.

“The Academy Museum will be a landmark that both our industry and our city can be immensely proud of,” said Academy CEO Dawn Hudson. “I appreciate the unwavering support of our board, our members, and especially our campaign chairs, all of whom have led us through this crucial stage.”

Launched in early 2012 by Campaign Chair Bob Iger and Co-Chairs Annette Bening and Tom Hanks, the campaign has raised $100 million through private donations towards a $250 million goal. “The early response to our fundraising campaign has been outstanding and is incredibly encouraging,” said Iger. “We are so grateful to the founding supporters of the campaign, who share our vision and passion for creating the Academy Museum.”

Located on the Los Angeles County Museum of Art (LACMA) campus, the nearly 300,000 square-foot Academy Museum will revitalize the historic building, which has been vacant or underutilized for nearly 20 years, and weave it back into the fabric of the city.

The design fully restores the Wilshire and Fairfax street-front facades of the 1938 Streamline Moderne building, and includes a spherical glass addition at the back of the original building. Designed to represent the marriage of art and technology, the addition will house a state-of-the-art theater which replaces an extension made to the structure in 1946. 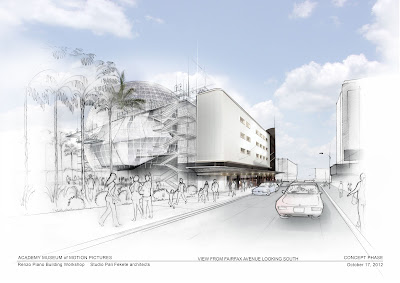 “The design for the museum will finally enable this wonderful building to be animated and contribute to the city after sitting empty for so long,” said Piano, the Pritzker Prize winning architect. “I am very inspired by the Academy’s name and mission, the idea of the arts and sciences working together to create films. Our design will preserve the May Company building’s historic public profile while simultaneously signaling that the building is taking on a new life that celebrates both the industry and art form that this city created and gave to the world.”

“A major movie museum in the heart of this city has been a long-held dream of the Academy,” said Academy President Hawk Koch, “Thanks to the latest technological developments we can take the visiting public through time, back into our history and forward toward our future.”

Through immersive exhibitions and galleries, special screening rooms, and an interactive education center with demonstration labs, the museum will draw from the Academy’s extensive collections and archives, which include more than 140,000 films, 10 million photographs, 42,000 original film posters, 10,000 production drawings, costumes, props and movie-making equipment, as well as behind-the-scenes personal accounts from artists and innovators – the Academy’s membership – working in the motion picture industry.

“Hollywood has played an unparalleled role in bringing American art, culture and creativity to people around the world,” said Antonio Villaraigosa, mayor of Los Angeles. “The Academy Museum will be a remarkable resource for L.A. that will both celebrate the industry that has defined our city and provide an essential resource that reinforces our position as leader and innovator.”

The Academy will also provide an endowment to support the Museum’s long-term programming.

“The Academy Museum will have a profound impact on the cultural landscape of Los Angeles. The decision to locate this museum in a historic building on LACMA’s campus will bring incredible benefits to both institutions and their visitors. It is a whole that is bigger than the sum of its parts,” said Zev Yaroslavsky, chairman of the Los Angeles County Board of Supervisors.

ABOUT THE ACADEMY
The Academy of Motion Picture Arts and Sciences is the world’s preeminent movie-related organization, with a membership of more than 6,000 of the most accomplished men and women working in cinema. In addition to the annual Academy Awards—in which the members vote to select the nominees and winners­—the Academy presents a diverse year-round slate of public programs, exhibitions and events; provides financial support to a wide range of other movie-related organizations and endeavors; acts as a neutral advocate in the advancement of motion picture technology; and, through its Margaret Herrick Library and Academy Film Archive, collects, preserves, restores and provides access to movies and items related to their history. Through these and other activities the Academy serves students, historians, the entertainment industry and people everywhere who love movies.

About Renzo Piano Building Workshop
The Renzo Piano Building Workshop is an interactive partnership that originated with the creative insight of Genoa-born architect Renzo Piano. Established in 1981, the Workshop has a team of 150 architects at offices in Genoa, Paris and New York. Our work strives for unusual and bold solutions, achieved through inventive use of technology, while emphasizing a respect for local cultural themes and a reliance on traditional materials and craftsmanship. RPBW aims to blend these diverse and occasionally dissonant themes in a search for a new architectural voice—one that pays homage to the urbanity and humanity of space and form—within a broader context that seeks elegance and balance yet rejects the conventional constraints of formalism and traditional boundaries between disciplines.

About Studio Pali Fekete
Zoltan E. Pali founded Studio Pali Fekete architects (SPF:a) with partner Judit M. Fekete LEED AP in 1988 with the mission of generating architecture that fuses forces of site, program, budget, nature, and culture. Although they have become proficient in working with historically designated buildings, their approach is decidedly modern, having both been mentored by the LA modernist and original LA12 designee, Jerrold E. Lomax, FAIA, an associate of Craig Ellwood. Notable projects have included restoration work on the Hollywood Pantages Theatre, the Greek Theatre and Gibson Amphitheatre, and Wallis Annenberg Center for the Performing Arts, which have resulted in numerous accolades, including the Preservation Award from the Los Angeles Conservancy.

The firm was executive architect on a $300 million renovation and expansion project at Getty Villa Museum in Malibu that included the new Getty Conservation Institute, the Fleischmann Amphitheatre, the Villa Auditorium and restoration of the original Villa Museum and Getty Ranch House. Most recently, they worked with the Los Angeles County Museum of Art on LACMA West, a 300,000-square foot adaptive reuse of a historic department store into museum galleries, offices, media libraries and other flexible program space. In 2005, Pali was inducted as one of the youngest members of the AIA’s College of Fellows.

Joe Kleimanhttp://wwww.themedreality.com
Raised in San Diego on theme parks, zoos, and IMAX films, InPark's Senior Correspondent Joe Kleiman would expand his childhood loves into two decades as a projectionist and theater director within the giant screen industry. In addition to his work in commercial and museum operations, Joe has volunteered his time to animal husbandry at leading facilities in California and Texas and has played a leading management role for a number of performing arts companies. Joe previously served as News Editor and has remained a contributing author to InPark Magazine since 2011. HIs writing has also appeared in Sound & Communications, LF Examiner, Jim Hill Media, The Planetarian, Behind the Thrills, and MiceChat His blog, ThemedReality.com takes an unconventional look at the attractions industry. Follow on twitter @ThemesRenewed Joe lives in Sacramento, California with his wife, dog, and a ghost.
Share
Facebook
Twitter
Linkedin
Email
Print
WhatsApp
Pinterest
ReddIt
Tumblr
Previous articleTexas State Fair Icon "Big Tex" Erupts in Flames
Next articleTEA Member CNA SOPHIS Provides Expertise to Home Design Industry With New Co-Venture