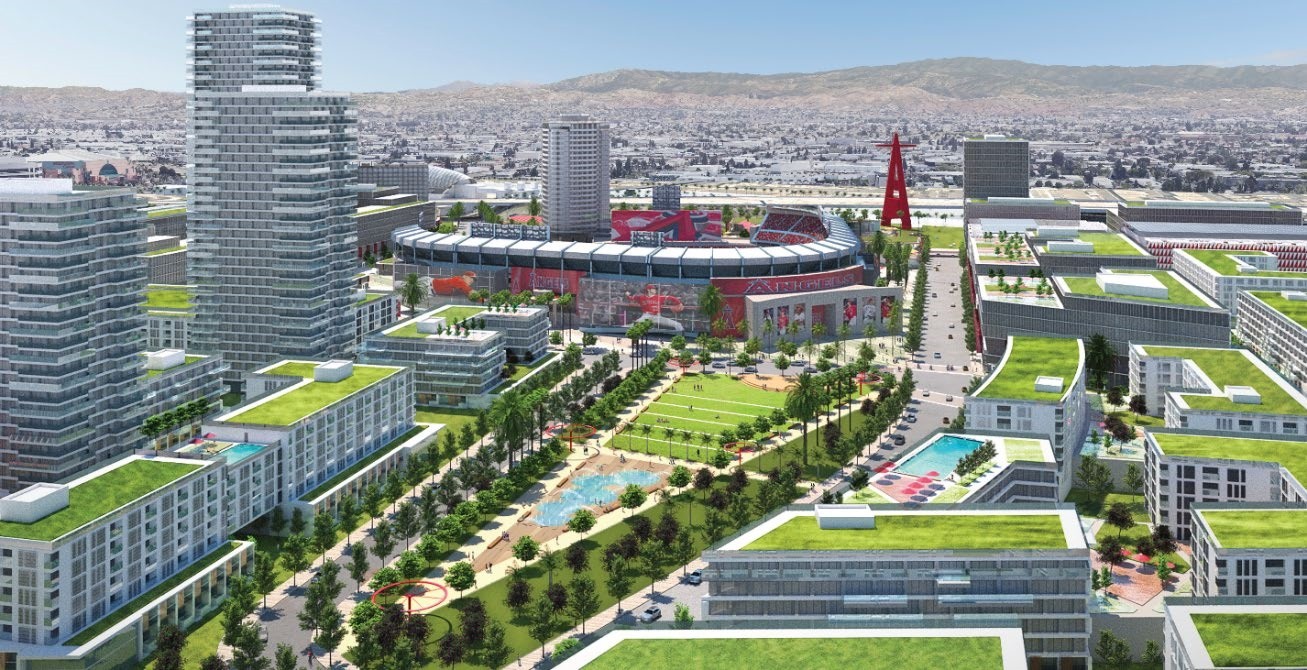 On September 9, 2020 the City of Anaheim Planning Commission held a special session on plans for the city’s stadium property. This followed the first of three town meetings held the day before by the city in conjunction with SRB Management.

During the session, the Planning Commission discussed a Disposition and Development Agreement (DDA) between the City of Anaheim and SRB Management, LLC to purchase and develop the Angel Stadium Property, including a Master Site Plan that provides the framework for the development of the site. The final DDA will need to be approved by City Council. SRB is offering $150 million in cash for the property, and is expected to receive a $170 million credit for the inclusion of public housing and a seven-acre public park.

According to the city’s Planning and Building Department, the approximately 152-acre project site is located in the Platinum Triangle, Sub-Area A of the Stadium District, within the Public Recreational (PR) Zone and Platinum Triangle Mixed Use (PTMU) Overlay Zone. The General Plan designates the project site for Mixed Use Urban Core land uses. The project site consists of a 45,500 seat baseball stadium known as Angel Stadium of Anaheim (Angel Stadium), an approximately 1,700 person capacity performance venue known as City National Grove of Anaheim (Grove), and associated surface parking lots. The project site does not include the 261,696 square foot Stadium Gateway office building located at 1900 S State College Boulevard. A variety of land uses surrounds the project site to the north, south and west including: residential, general retail, restaurants, offices, and light industrial. The Anaheim Regional Transportation Intermodal Center (ARTIC) and the Honda Center are northeast of and separated from the project site by the Burlington Northern Santa Fe (BNSF) Railroad and State Route (SR)-57. The Santa Ana River, SR-57, and the City of Orange are located east of the project site.

For more than 50 years, Angel Stadium has served as one of the City’s main destinations for tourism and recreation. Angel Stadium, a Major League Baseball (MLB) ballpark, has been a part of the City’s history since April 1966, when it held its opening day for the California Angels. The stadium immediately became known as “the Big A” because of a unique A-frame scoreboard sporting a halo around the top. Since its opening, Angel Stadium has been the home stadium for the Angels MLB franchise. The City significantly renovated the stadium in 1979-1980 to accommodate the Los Angeles Rams, a National Football League (NFL) team, who made the stadium its home from 1980 to 1995. As part of this renovation, the City relocated “The Big A” sign to its current location. After the Rams relocated to St. Louis in 1995, the stadium was significantly renovated to its current configuration.

The current proposed project includes a mixed-use community consisting of up to 5,175 residential dwelling units, 1,750,000 square feet of commercial uses (including up to 943 hotel rooms), and 2,700,000 square feet of office uses. Also proposed are public parks, including Code-required “Mini-Parks” and a 7-acre “Community Benefit Park.” The City will retain ownership of an adjacent City-owned water utility plant, and a site for future development of a fire station. The proposed project provides for the retention and maintenance of the existing 45,500-seat Angel Stadium, with an option to replace the existing stadium with a replacement stadium of the same, or lesser, size and seating capacity. In the event that the applicant exercises the option to construct the replacement stadium, the existing stadium would continue to operate during the construction of the replacement stadium. Under the proposed deal, the Anaheim Angels will continue to play in the stadium through at least 2050.

Joe Kleimanhttp://wwww.themedreality.com
Raised in San Diego on theme parks, zoos, and IMAX films, InPark's Senior Correspondent Joe Kleiman would expand his childhood loves into two decades as a projectionist and theater director within the giant screen industry. In addition to his work in commercial and museum operations, Joe has volunteered his time to animal husbandry at leading facilities in California and Texas and has played a leading management role for a number of performing arts companies. Joe previously served as News Editor and has remained a contributing author to InPark Magazine since 2011. HIs writing has also appeared in Sound & Communications, LF Examiner, Jim Hill Media, The Planetarian, Behind the Thrills, and MiceChat His blog, ThemedReality.com takes an unconventional look at the attractions industry. Follow on twitter @ThemesRenewed Joe lives in Sacramento, California with his wife, dog, and a ghost.
Share
Facebook
Twitter
Linkedin
Email
Print
WhatsApp
Pinterest
ReddIt
Tumblr
Previous article
First-of-its-kind SimEx-Iwerks flying theater opens at Wilderness Resort in the Wisconsin Dells
Next article
San Diego’s Comic-Con Museum shares details of long-range plan