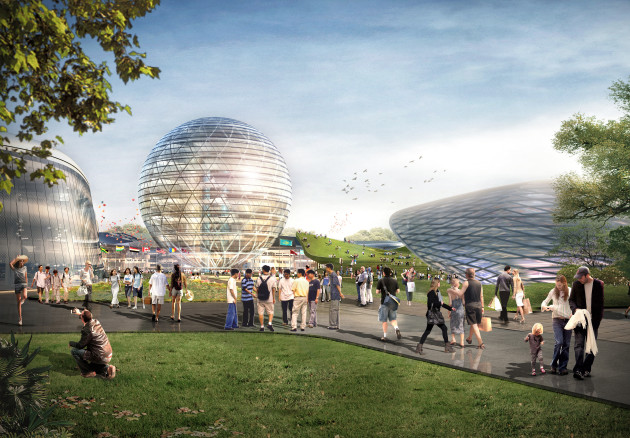 Not long ago, InPark was featuring Milan Expo 2015, a World’s Fair that attracted 21 million visits and 29 Heads of State. The theme of that Expo was “Feeding the Planet, Energy for Life” and the food theme turned out to be a great hit throughout the 6-month event. Now in early 2016 we are awaiting the next Expo a year away in Kazakhstan. This time the theme is “Future Energy,” a topic that has significant impact worldwide. Astana Expo 2017, officially sanctioned by the Bureau International des Expositions (BIE) will take place from June 10 to September 17.  2017. This Expo is a three-month event as opposed to the six-month run of the Milan Expo. That is because there are two types of World’s Fairs; big ones that take place every five years (the next big one is Dubai Expo 2020) and smaller ones that happen between big ones (the last smaller one was Yeosu Expo 2012 in Korea).

Astana Expo 2017 will be the first international exhibition of this kind held in a country from the former Soviet Union. It marks the first time energy has been presented at a World’s Fair since Knoxville Expo ‘82 and a lot of developments have taken place in this field in the past 34 years. The theme will offer Kazakhstan and the participating countries a platform to showcase energy developments in the unique, hands on way characteristic of World’s Fairs dating back to 1851.

Attendance at this Expo is projected at 3 million, which is a reasonable figure for a three-month smaller expo. So far 76 countries have made a commitment to participate. Expo official expect that number to grow to over 100.

In keeping with the “Future Energy” theme, the Astana site will use best energy practices, powered by renewable energies such as solar, wind, biomass, hydropower and geothermal energy. The buildings themselves will be power plants that collect and use solar and wind energy and store heat underground.

After the Expo ends in September of 2017 the site will live on. Plans call for an International Centre for the development of green technologies and investment projects under the auspices of the UN. The site will also be the home of the new Astana International Financial Center.

CLICK HERE TO READ Tales from the Expo – Lessons for world’s fair exhibitors, AN IPM ONLINE BOOK BY JAMES OGUL

Joe Kleimanhttp://wwww.themedreality.com
Raised in San Diego on theme parks, zoos, and IMAX films, InPark's Senior Correspondent Joe Kleiman would expand his childhood loves into two decades as a projectionist and theater director within the giant screen industry. In addition to his work in commercial and museum operations, Joe has volunteered his time to animal husbandry at leading facilities in California and Texas and has played a leading management role for a number of performing arts companies. Joe previously served as News Editor and has remained a contributing author to InPark Magazine since 2011. HIs writing has also appeared in Sound & Communications, LF Examiner, Jim Hill Media, The Planetarian, Behind the Thrills, and MiceChat His blog, ThemedReality.com takes an unconventional look at the attractions industry. Follow on twitter @ThemesRenewed Joe lives in Sacramento, California with his wife, dog, and a ghost.
Share
Facebook
Twitter
Linkedin
Email
Print
WhatsApp
Pinterest
ReddIt
Tumblr
Previous articleBarcelona to Host IAAPA’s European Attractions Show in 2016
Next articleUniversal Orlando Unveils First of its Kind Trackless Ride Vehicle for Skull Island: Reign of Kong