New 13,000-gallon touchpool allows visitors to get personal with sharks 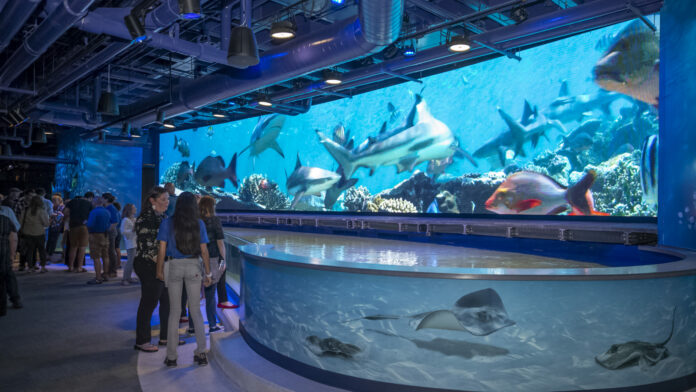 The new pool measures approximately 60-feet long by 16-feet at its widest point — six times the size of the previous stingray touchpool at the Aquarium. A massive interactive LED screen running the entire length of the pool features a variety of sharks, rays and fish to highlight the diversity of the ocean.

As a member of the Association of Zoos and Aquariums, Audubon Aquarium has partnered with fellow member organizations to help SAFE (Saving Animals From Extinction). AZA SAFE provides a new approach for collaborative conservation with a Conservation Action Plan that includes specific projects, goals and actions to address the needs of each species, including sharks and rays.

“Sharks play a vital role in top-down maintenance of ocean ecosystems around the world,” said Senior Vice President and Managing Director of Audubon Aquarium of the Americas Rich Toth. “Globally, shark and ray species are threatened with extinction largely due to overfishing and other unsustainable human practices.”

By fostering a connection to marine life through hands-on interaction with sharks, Audubon hopes to encourage an appreciation for the often misunderstood, but essential, species. The goal of the new experience is help guests realize that sharks have far more to fear from humans than humans do from them.

Toth added, “Our hope is that by reaching into the touchpool creates a connection, sparking action to protect marine life and the ocean.”

Construction of the $2.9 million habitat spans much of the Aquarium’s second floor and is the largest project at the Aquarium since the 2014 opening of the Great Maya Reef.