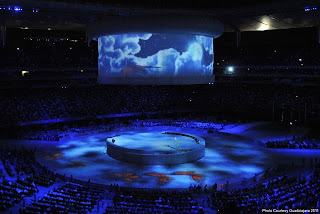 The 2011 Pan and Parapan American Games have officially drawn to a close in Guadalajara, Mexico. The Pan Am Closing Ceremonies were celebrated in the sold-out Omnilife Stadium on October 30, followed by the Parapan Closing Ceremonies at Telmex Athletics Stadium on November 20. At both events, an 8-minuteHandover Ceremony created by BaAM Productions symbolized the passing of the torch from Guadalajara to Toronto, ON – the host city for the 2015 Pan American Games.

BaAM produced the Handover Ceremonies, providing TO2015 – Toronto’s Pan American Organizing Committee – with full creative and technical services. The Handover Ceremony was comprised of a protocol-driven segment and a creative presentation signaling the countdown to Toronto’s 2015 games. The BaAM team collaborated closely with TO2015 Senior Vice President, Marketing and Revenue, Katherine Henderson and Creative Director, Arts, Culture and Festivals, Don Shipley to develop all elements of the creative presentation. BaAM also worked alongside FiveCurrents, Producer of the 2011 Pan American Games Ceremonies, to seamlessly integrate the creative presentation within the Closing Ceremony programs.

The Handover Ceremonies were developed through a creative process led by BaAM and involved a cross-section of talented thought-leaders from Canadian arts and culture. The resulting creative brief was rooted in story and focused on sharing the heritage and culture of the Pan American spirit while highlighting the diverse cultural canvas of Toronto.

BaAM’s artistic and production team brought the concept to life using a combination of athletic and artistic dance and evocative projected imagery – underscored by a soaring original musical score of global harmonies. BaAM worked with choreographer Luther Brown, composer Lou Pomanti and projection designer Alexis Laurence of Turbine Studio as well as a talented group of dancers – a team whose backgrounds and styles represent the cultural canvas of Toronto and the Greater Golden Horseshoe region.

Multi-platinum recording artist Florence K started the Pan Am Handover segment with an emotional rendition of “O Canada” after the Pan Am flag was passed from Mario Vázquez Raña, President of the Pan American Sports Organization, to Toronto Mayor Rob Ford and Federal Minister of Sport Bal Gosal. Canadian recording artist, Justin Hines, who uses a wheelchair as a result of the joint condition Larsen syndrome, sang Canada’s national anthem at the Parapan Closing Ceremony.

For both Ceremonies, the artistic, highly athletic dance explored sport-movement in a way that defied gravity and human strength using the migration of the Monarch butterfly as inspiration and projected media to take the global audience on a visually-driven and imagistic journey. At the Parapan Ceremony, performers like Luca “Lazylegz” Patuelli, born with a rare muscle disorder that limits motion in the joints, conveyed the potential of the power of the human spirit and the infinite possibilities that can be achieved through training, ambition and perseverance. The Pan/Parapan Handover Ceremonies ended with images and invitations from people across the Toronto and Greater Golden Horseshoe region, welcoming Pan America to Toronto in 2015 and adding a personal touch to the evening’s program.

About BaAM Productions
BaAM is a creative development and project services company specializing in the unique requirements of high profile and large scale sports, cultural and entertainment projects. Clients include the National Hockey League, Major League Baseball, the National Football League, the Aga Khan Foundation Canada, the CN Tower and the Olympic Spirit Group. Follow us on Twitter @BaAMProductions and www.baamproductions.com to stay up-to date with all of our exciting projects and events.

For more information about the Games, please visit toronto2015.org.