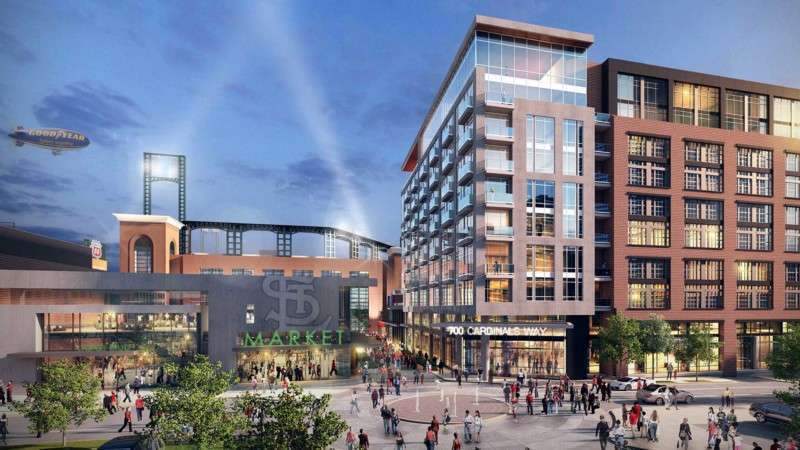 The St. Louis Cardinals and The Cordish Companies have broken ground on the $260 million second phase of Ballpark Village. The 700,000 square foot mixed-use expansion project will complete a full build-out of Clark Street, transforming it into one of the most dynamic streets built around professional sports.

“This second phase is more than seven times the scale of the first phase of Ballpark Village, bringing our total investment in new construction downtown to well over $750 million since 2005,” said Bill DeWitt III, President of the St. Louis Cardinals. “By developing new housing, Class A office space, an upscale hotel, and high quality street level retail, we are truly putting the “Village” into Ballpark Village.”

New buildings will be built on both the east and west sides of the existing Phase 1 development. A new street will emerge, running from 8th Street to Broadway, and be called Cardinal Way. On the east end of Cardinal Way will be a 29-story luxury residential tower called One Cardinal Way. On the west end will be the first new construction Class A-Office Building in downtown in over a generation, anchored by PricewaterhouseCoopers, and an upscale convention hotel, Live! By Loews – St. Louis, MO. In addition, a three-story retail pavilion just north of the existing Busch II Infield and Event Plaza will connect everything together. This spectacular glass pavilion will be anchored by the 31,000 square foot Onelife Fitness, a nationally recognized, state-of-the-art health and fitness club.

“It is an honor to grow our partnership with the DeWitt family and the St. Louis Cardinals on this $260 million expansion of Ballpark Village,” stated Blake Cordish, Vice President of The Cordish Companies. “Ballpark Village is setting the gold standard for sports-anchored developments in the country and our partnership is proud to play a role in the ongoing revitalization of downtown St. Louis.”

Located at the corner of Clark and Broadway, One Cardinal Way is designed to be one of the most luxurious, amenity-rich apartment communities in the country. The 29-story, 297-unit tower will offer unobstructed views directly into Busch Stadium, as well as the Gateway Arch, Mississippi River, and St. Louis skyline. Designed by Hord Coplan Macht (HCM), One Cardinal Way will be designed to meet National Green Building System certification and will feature high-end materials, expansive ceiling heights, state-of-the-art appliances, and parking within the building. The community will feature studio, 1-bedroom, 2-bedroom and penthouse apartment homes. Additionally, the first floor will include 10,000 square feet of restaurant, retail and lifestyle amenity space.

One Cardinal Way will also feature over 25,000 square feet of interior and exterior residential amenity space that rivals that of any luxury apartment or condo building in the United States including:

“This is a tremendous project that will bring hundreds of new residents and over a thousand new jobs to our city,” said Lyda Krewson, Mayor of St. Louis, MO. “I am excited to see a world-class hometown company like the Cardinals and their development partners, The Cordish Companies, expanding their investment in St. Louis and bringing the first new, Class-A office building downtown in nearly three decades.”

Plans were also announced for a new lifestyle tenant to anchor the expansion: Onelife Fitness. The state-of-the-art flagship location will occupy 31,000 square feet in the retail pavilion building directly north of the Busch II Infield and Event Plaza. The expansive space will span two levels and feature a two-story glass façade overlooking incredible views of Ballpark Village and Busch Stadium.

Onelife Fitness is owned and operated by US Fitness Holdings, LLC, one of the largest fitness companies in the United States, with the passion to improve lives through personal service and innovative programming. This high-energy club will feature over $1 million of the newest cardio and strength equipment, large functional turf training areas (indoor and outdoor), the most innovative and fun group fitness classes like BodyPump, Pilates, Yoga, Hot Yoga and Barre classes and industry-leading personal training and small group training like Zone4 high intensity heart-rate based interval training and Explosive Performance athlete training and more.

US Fitness currently owns and operates 47 clubs in Missouri, Georgia, Virginia, Maryland, and the District of Columbia. St. Louis will be the second Midwest location – the first location opened in Kansas City, MO adjacent to Cordish’s One Light Luxury Apartment tower in the Power & Light District.

“We are excited to open Onelife Fitness within one of the most impressive and highest profile sports-anchored, mixed-use projects in the country,” said Kirk Galiani, Co-Chairman, US Fitness Holdings, parent company of Onelife Fitness. “Our successful partnership with The Cordish Companies has allowed us the opportunity to extend our Midwest presence and to now team up with one of the great franchises of all professional sports, the St. Louis Cardinals, to bring something extremely special to Ballpark Village and downtown St. Louis.”

The construction of Ballpark Village’s expansion represents the next step in the Cardinals’ vision for downtown St. Louis that began with the opening of the new $411 million privately-financed Busch Stadium in 2006. Located on 10-acres north of Busch Stadium, Ballpark Village is the first master-planned development designed around a new Major League Ballpark. The dining and entertainment district welcomed over 10 million guests in its first three years.

The expansion project is targeted to begin opening in 2019 and be complete by 2020.

Joe Kleimanhttp://wwww.themedreality.com
Raised in San Diego on theme parks, zoos, and IMAX films, InPark's Senior Correspondent Joe Kleiman would expand his childhood loves into two decades as a projectionist and theater director within the giant screen industry. In addition to his work in commercial and museum operations, Joe has volunteered his time to animal husbandry at leading facilities in California and Texas and has played a leading management role for a number of performing arts companies. Joe previously served as News Editor and has remained a contributing author to InPark Magazine since 2011. HIs writing has also appeared in Sound & Communications, LF Examiner, Jim Hill Media, The Planetarian, Behind the Thrills, and MiceChat His blog, ThemedReality.com takes an unconventional look at the attractions industry. Follow on twitter @ThemesRenewed Joe lives in Sacramento, California with his wife, dog, and a ghost.
Share
Facebook
Twitter
Linkedin
Email
Print
WhatsApp
Pinterest
ReddIt
Tumblr
Previous articleMonster Golf Enters the Fifth Dimension of “The Twilight Zone”
Next articleLoro Parque’s Poema del Mar Aquarium Opens in Gran Canaria.