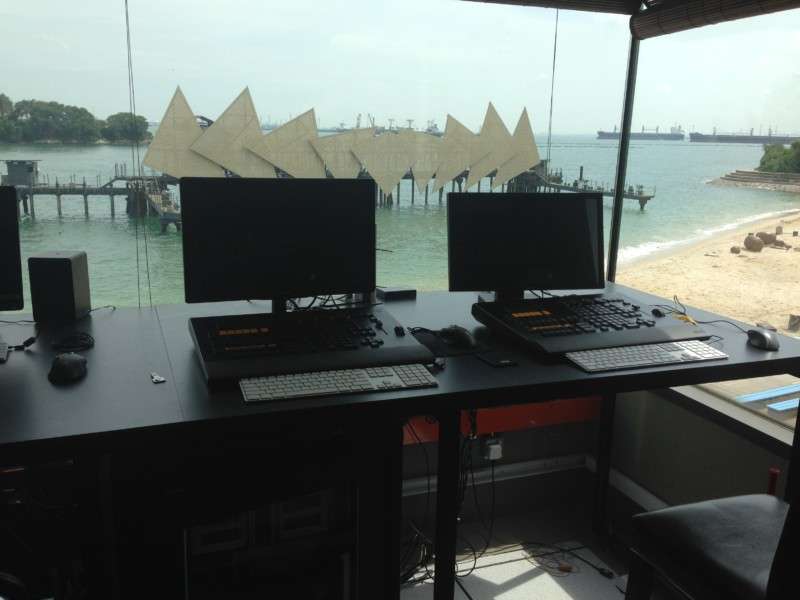 ABOVE: Wings of Time, a show created by ECA2 for Sentosa Island, Singapore, uses Medialon show control equipment to run the show each night. This view from the control booth shows the show control stations.

With a career rich in AV technical theatrical experience, Eric Cantrell has spent the last ten years with Medialon, now a part of Barco. In this exclusive interview with InPark, Eric draws on his decades of knowledge to help demystify show control and identify areas of future development for this critical piece of themed entertainment technology.

Let’s start with the definition. What is show control, and what is it capable of doing?

I like to tell people that they are already familiar with AV control systems when they use their television remote. It can change channels, adjust volume and select different device inputs. Now imagine you had to coordinate the television with five other devices in your living room. AV control systems are used to send commands to all the devices, making it easy to switch between watching the news and playing a movie on the Blu-ray player. Show control technology adds to this multi-device coordination by adding in timing accuracy and the ability to synchronize actions. Basically, any time more than one type of AV special effect, or lighting device needs to coordinate or synchronize with another type, that’s when you’ll see show control systems used.

That is important because lighting, audio and effects products are very complex and perform a lot of functions, but they are not built specifically to synchronize with one another. Show control functions as a central arbitrator using the native languages of the devices it manages, and tells each device when to perform its function. It becomes a single point of interface that operates all the other equipment, making a coordinated show possible. Additionally, it allows the same show to run over and over – sometimes without an operator.

Absolutely, because the storytelling being done in shows, attractions and exhibits is becoming more and more complex. They are increasingly media-based and immersive. Audiences are experiencing movement, projection, wind, water, smells, lighting and more. But if the timing of any one of those elements isn’t synchronized to support the story, then the quality of the experience suffers.

There is also an increased necessity for higher throughput – pulsing more people through an experience more often. Show control resets equipment for each experience (or each scene in the case of attractions) quickly and repeatedly.

Finally, show control also helps maintain a consistent experience by taking care of back-end processes. When projector lamps are ending useful life, show control can alert maintenance to prevent extended downtime. If a playback device has an issue, the show controller can notice and route a backup player to the projector automatically.

How did Medialon get involved in show control systems?

Medialon started off as a French distributor for a Swedish show control system called Dataton Trax. Our company was known as Dataton Multimedia France then. Around the year 2000, Dataton stopped making the Trax product and so we changed our name and created our own show control system called Medialon Manager. It debuted for the opening ceremonies of the 2000 Sydney Olympics.

In 2004, Medialon opened an office in Miami to help service the cruise line industry and build the market in the United States. In 2013 the company moved its headquarters from France to Miami and Barco acquired Medialon in 2016.

How has being part of the Barco family boosted your ability to provide show control solutions?

We have had a long relationship with Barco. Not only did we provide show control drivers for their projectors, but we had an OEM (Original Equipment Manufacturer) relationship. Barco mult-screen video processing desks shipped with a version of the Medialon Manager software included, specifically crafted to make running live events easier. The Barco Encore consoles could be used as a front-end trigger for big multi-image shows, so when a preset was recalled, the correct media was loaded on the correct players, and when the user pressed the Take button to send the preset to the screen, the video decks would play in sync. There was no need to manage multiple video players separately, which is difficult to do manually.

Now that we are one company, that kind of eco-systems thinking is one of the big benefits of working alongside the other product teams. When one of Barco’s product line teams wants to create something new or make new functionality that involves managing or coordinating with other AV devices, we can step in with show control and help them develop solutions early on in the process.

How do your products adapt to the different type of venues in this marketplace?

Our systems have been designed as general-purpose show control systems, based on the idea that entertainment technicians will most often be the ones programming it. It’s designed with nomenclature for the theater world, not for software developers. It is also very intuitive. If I want to open the shutter on the projector, I drag the shutter command onto the timeline and at that point the shutter will open. It’s a fairly straightforward workflow based on knowing that most people don’t want to code.

But you can easily create a museum control system or attraction control system with the same tools. It is fast to deploy because of that graphical programming interface. 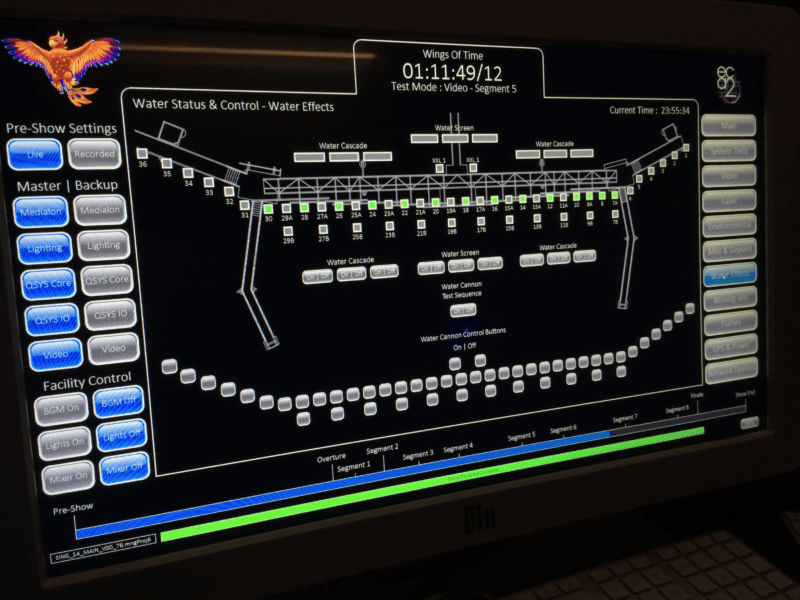 What other things can show control do that people might not think about?

Show control can be quite effective in making experiences more interactive. Input can come from sensors, virtual reality environments, or even Twitter feeds. For example, show control can activate a fan when a guest enters a windy location in a VR scene. The tools of VR and gaming engines can continue to define the rules, story and gameplay of virtual experiences, but show control produces an outcome that occurs in the physical world. At its heart, show control processes and communicates data, so as we connect more and more data streams, designers have great potential to create new experiences.

You mention VR. Is that the future of show control?

Although the VR scenario I just mentioned has potential, I’m generally bearish on VR as an end-user attraction system. The headsets are isolating, which is the opposite of why people go with their friends and families to theme parks or musuems, which are experiences groups have together. But there is an interesting other side to VR and show control. People creating attractions can use VR as a design tool in a pre-visualization environment so they can tweak details long before they move any dirt.

We can essentially connect a show control system (with its relative ease of programming) to the VR environment so that the VR is accepting commands from the show controller, triggering effects in the VR environment. It isn’t necessary to build all that timing information into the VR engine, and your show control programmer can make changes on the fly, with the VR program reacting to those live inputs.

If you have this VR model and you’re working on an attraction, your programmer can be off-site (even on the other side of the planet) making tweaks to the show control programming in the VR environment and then send the electronic show file to be tested in the real attraction. That’s an ideal way to add updates without shutting down an attraction.

What new technologies can we expect to see in this marketplace?

We continue to make incremental improvements to our Medialon Manager software and Showmaster products. Showmasters embed the power of Medialon Manager show control system into rack-mounted hardware that is purpose-built for show control, with all the required ports – such as DMX, Timecode, Serial, Ethernet, contact closure inputs, and relay outputs – right on the box.

We are always updating our products to work with the latest new equipment and protocols in the industry. For example, energy efficiency standards in Ethernet switches are implemented to shut off network ports to save energy when they sit idle. Since show control systems need to be able to talk to devices regularly and with accurate timing, a port that is powered down impacts our ability to communicate quickly with devices. Show systems are so reliant on the networks, that when a new network concept comes up (like IPv6, which is coming down the line) then we have to be ready for that.

We have now developed a new product, Overture, to sit as an umbrella interface level over multiple show controllers, so administrative users can have a single point of interface for all systems park-wide, but yet restricted in use for different types of users. For example, audio engineers need to have access to see info about audio around the park, and the lighting folks need the same type of thing, but only for lighting. Overture sits over the existing show controllers and talks to them – gathering information that each show controller knows about all the devices it is managing, and then Overture compiles that information and presents it based on the user and what type of information that user should have access to. It is the ultimate in user management and also provides systemwide status logging, usage statistics, scheduling, and alarm notifications.

It’s ideal because you don’t have to touch the individual attractions or exhibits in order to add Overture. It’s a separate entity that uses info that is already existing in the individual show controllers. Overture can save you time on new projects as well, since programmers don’t have to build or set up the logging programs, access control, scheduling, or maintenance interfaces at the local level, leaving the show control programming to only that: controlling the show. Overture handles all of the interface and back-end administrative stuff.

It is interesting tech and I’ve seen some cool applications from Intel and Cirque du Soleil, but I’m still not sure what we are going to do with it that will make the “wow” last longer than a few seconds. How to best use drones for shows – and how they are integrated into show control technology – remains to be seen. • • •

Joe Kleimanhttp://wwww.themedreality.com
Raised in San Diego on theme parks, zoos, and IMAX films, InPark's Senior Correspondent Joe Kleiman would expand his childhood loves into two decades as a projectionist and theater director within the giant screen industry. In addition to his work in commercial and museum operations, Joe has volunteered his time to animal husbandry at leading facilities in California and Texas and has played a leading management role for a number of performing arts companies. Joe previously served as News Editor and has remained a contributing author to InPark Magazine since 2011. HIs writing has also appeared in Sound & Communications, LF Examiner, Jim Hill Media, The Planetarian, Behind the Thrills, and MiceChat His blog, ThemedReality.com takes an unconventional look at the attractions industry. Follow on twitter @ThemesRenewed Joe lives in Sacramento, California with his wife, dog, and a ghost.
Share
Facebook
Twitter
Linkedin
Email
Print
WhatsApp
Pinterest
ReddIt
Tumblr
Previous articleTech Savvy: InfoComm 2018
Next articleAlterface: Ride hybridization