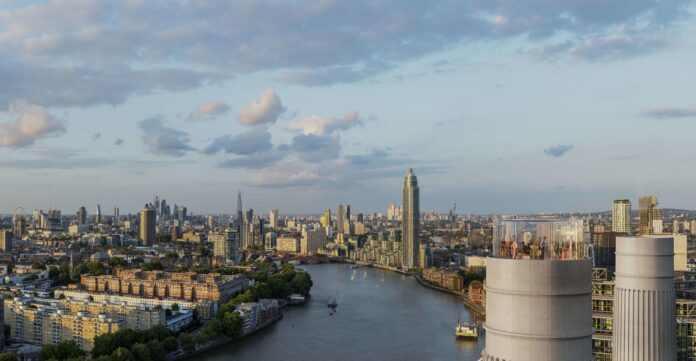 Battersea Power Station revealed a new interactive and immersive CGI bubble image of its unique Chimney Lift experience, which provides a preview of the breathtaking 360° panoramic views guests will experience once the lift reaches the top of the Grade II listed building’s North West chimney. It was also announced that London’s latest attraction will be operated by global events and entertainment leader IMG, once the Power Station opens to the public next year.

Travelling 109 meters up the interior of the North West chimney to the top, the Chimney Lift at Battersea Power Station will offer unrivalled views of the capital’s skyline and a one-of-a-kind perspective back down onto the historic landmark. Set to become one of the most unique viewing platforms in London, the bespoke glass Chimney Lift will hold around 30 visitors and be available to the public as well as for private events. The visitor experience will begin in Turbine Hall A with an immersive exhibition celebrating the Power Station’s history, before venturing into the Chimney Lift.

Running more than 800 events around the world, IMG produces and operates some of the UK’s most popular events including Hyde Park Winter Wonderland, the Natural History Museum Ice Rink, Hampton Court Palace Festival, The Big Feastival and Taste of London.

Sam Cotton, Head of Leasing at Battersea Power Station Development Company said: “We are excited to be able to give future visitors a preview of the breathtaking views they will be able to enjoy from our unique Chimney Lift. We are creating a new destination in London, which will offer visitors an experience like no other, and partnering with leading global events and entertainment giants IMG to operate the Chimney Lift is sure to guarantee this.

“This year is going to be the most exciting yet in the transformation of Battersea Power Station with our first residents moving into their homes this Spring, the Northern Line Extension opening in the Autumn and our retailer and office occupiers starting to fit out their spaces ahead of opening the Power Station’s doors to the public next year. The first ride in the Chimney Lift will be an extremely special moment for everyone involved in the project and one we’re all looking forward to.”

Stephen Flint Wood, EVP and Managing Director of Arts & Entertainment Events at IMG added:  “We are proud to be working with Battersea Power Station on this prestigious project and utilizing our expertise in operating major attractions and events to bring London’s newest attraction to life. The Chimney Lift will provide year-round entertainment, with visual and experiential elements for visitors from across all of London, the UK and around the world to enjoy. We look forward to welcoming them when it opens next year.”

Once completed, Battersea Power Station will form the centerpiece of a new ‘15-minute’ live, work and play neighborhood, which will act as a town center for the immediate and wider local communities, a new business quarter for the capital and an experiential destination for Londoners and international visitors. Inside the iconic Power Station there will be 253 residential apartments, over 100 retail shops, restaurants and cafes, as well as unique event spaces. Apple will also take 500,000 sq. ft of office space across six floors in the Power Station for its new London campus.

Residents and visitors to Battersea Power Station will also be able to enjoy numerous new green and open public spaces, including the new Bjarke Ingels designed Malaysia Square and the six acre Power Station Park on the river bank, which connects seamlessly to the new Linear Park running from Battersea to Vauxhall.

Circus West Village, the first chapter in the regeneration of Battersea Power Station, is already home to more than 1,500 residents and over 20 bars, restaurants, cafés and fitness and leisure offerings including The Turbine Theatre, Be Military Fit, DNA VR, Black Sheep Coffee and Archlight Cinema. The thriving riverside neighborhood usually welcomes over three million people on average each year thanks to its annual events program. Last year’s highlights included the Light Festival at Battersea Power Station and Summer Showtime on The Coaling Jetty, London’s first open-air cinema and theatre experience.

With the Northern Line being extended to give this new ’15 minute’ live, work and play neighborhood its very own Zone 1 London Underground station, Battersea Power Station is expected to draw visitors from across the capital and the globe, becoming one of London’s most visited destinations. It will also be one of the go-to places in South West London, boosting the local economy and creating over 17,000 jobs.

On PC, Mobile or Tablet

Please visit https://360.batterseapowerstation.co.uk/chimney-lift/. Once the webpage has loaded, click the center of the screen and with the left-hand button on your mouse held down, move the mouse from left to right to view the 360° panoramic views from the chimney lift.

Further information on the Chimney Lift Experience at Battersea Power Station will be available in the coming months.