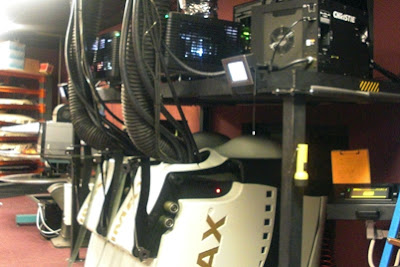 Los Angeles, CA, USA (January 31, 2012) /BUSINESS WIRE/ — Be Media and Cinema Group announce the convergence of traditional IMAX and state-of-the-art 4K digital projection from the same theater booth window in the new and improved Desert IMAX Theater of Cathedral City, California. The project is one of the first digital 4K projection systems in the giant screen format (15/70).

David Sayah, Be Media’s vice president, describes the project: “We were given the task to convert the community’s treasured landmark to digital while also maintaining the current IMAX systems in a way that would utilize the entire 70-foot by 52-foot screen, be as bright and beautiful in both 2D and 3D, and be easily controlled and maintained by any member of the theater’s staff. It was the perfect undertaking for Be Media and we are extremely proud of the results.”

The theater has been engineered to display sources of untraditional auxiliary content such as video game consoles and laptops all controlled via touch panel. In addition, to enable both IMAX and digital content to be available at any given time, Be Media customized a special platform, cooling system, and control interface. The 4K projection system is comprised of Doremi Lab servers, Christie 4K projection, and an XPAND 3D active system.

BE MEDIA is headquartered in Los Angeles, California and was founded in 1998 as a total technology design-build firm for state-of-the-art institutional, entertainment and hospitality venues. For the giant-screen community, Be Media provides total turn-key design, engineering, installation and service of projection booth, theater, and pre-show technologies. The company’s reputation, having completed over 350 projects in eight countries and three continents, is one of professionalism and exacting standards regarding the provision of advanced and scalable technologies, white-glove service and installation, and simple touchscreen controls. Learn more at http://bemedia.com.

CINEMA GROUP, located in Salt Lake City, Utah, partnered with Be Media during this project. Cinema Group is a large format theatre management and film consulting company with more than 20 years of experience in IMAX theatre operations and large format film production. Learn more about Cinema Group at http://cinemagroup.net.

Joe Kleimanhttp://wwww.themedreality.com
Raised in San Diego on theme parks, zoos, and IMAX films, InPark's Senior Correspondent Joe Kleiman would expand his childhood loves into two decades as a projectionist and theater director within the giant screen industry. In addition to his work in commercial and museum operations, Joe has volunteered his time to animal husbandry at leading facilities in California and Texas and has played a leading management role for a number of performing arts companies. Joe previously served as News Editor and has remained a contributing author to InPark Magazine since 2011. HIs writing has also appeared in Sound & Communications, LF Examiner, Jim Hill Media, The Planetarian, Behind the Thrills, and MiceChat His blog, ThemedReality.com takes an unconventional look at the attractions industry. Follow on twitter @ThemesRenewed Joe lives in Sacramento, California with his wife, dog, and a ghost.
Share
Facebook
Twitter
Linkedin
Email
Print
WhatsApp
Pinterest
ReddIt
Tumblr
Previous articleSix Flags Great America Tops Off 2012 Coaster X-Flight
Next articleTREND: Fountain Shows