Behind the scenes tech look at Disney Springs’ T-Rex Café 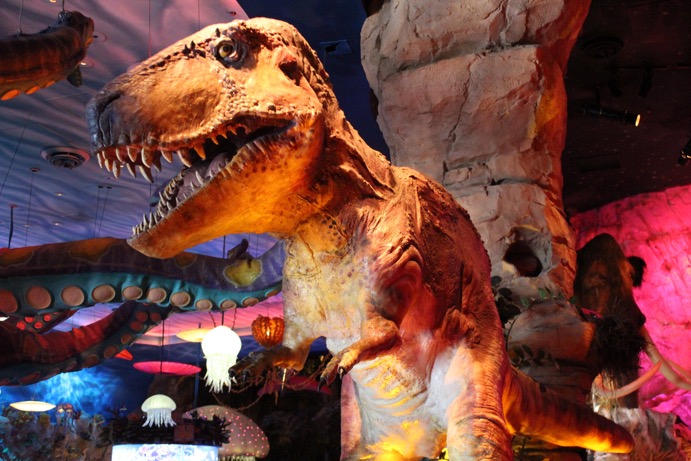 Opened in 2008, the T-Rex Café in Disney Springs (then Downtown Disney Marketplace), part of the Walt Disney World resort, has been providing guests food in a highly themed prehistoric environment, complete with animatronic dinosaurs, jungle foliage, a crystal cave, and other detailed theming. It’s similar to the more ubiquitous Rainforest Café; both are owned by Landry’s.

Above diners a painted ceiling shows a tranquil starry sky, except every 20 minutes when a meteor shower illuminates the restaurant and agitates the animatronic beasts who are further terrified when a massive asteroid crosses the sky and smashes into the earth, shaking the building with 8kW of sub-bass rumbles and crashes.

AV Stumpfl invited InPark to the restaurant to see firsthand how they recently upgraded the technology behind the show. Kevin Zevchik, US Manager at AV Stumpfl Inc., gave us a tour and explained the work they recently completed. 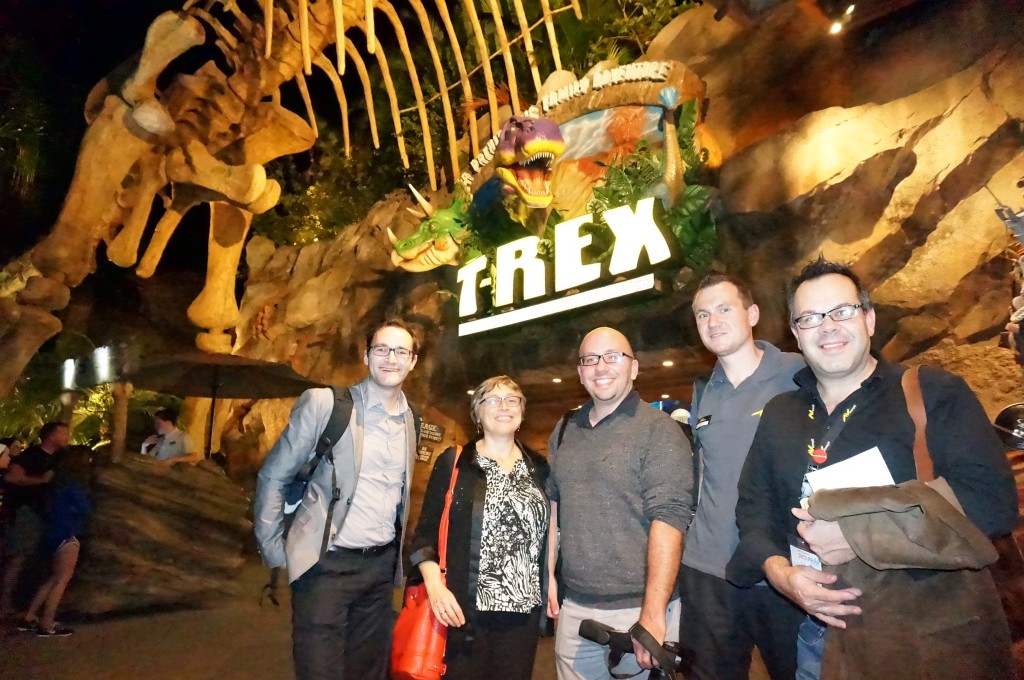 Originally, five 4K-lumen projectors blended to deliver the meteor and asteroid show, along with a single projector in the retail area. “Each projector needed occasional replacement lamps and realignment of overhead projector blends after each re-lamping,” said Zevchik.

AV Stumpfl and local integrator Zanim8tion worked together to replace the original five projectors with just two Digital Projection 11K ANSI lumen, laser-powered HIGHlite WUXGA projectors with an operational life of 20,000 hours before requiring re-lamping. Because of the frequency of the show, it was more efficient to keep the old projectors on and shutter them between shows. The new projectors allow for easier on and off cycling. Based on their current usage cycle of a two-minute show every 20 minutes, the projectors are estimated to be able run for about 56 years before the lasers will need replacing.

The projectors will still require regular maintenance visits to clean the optics and change the dust filters, which will inevitably have some impact on their alignment. This is where the café’s new AV Stumpfl Wings VIOSO system that controls the projector blends and media replay helps significantly.

“Once the maintenance crew has finished handling the projectors, Wings VIOSO uses a small, dedicated camera pointed at the ceiling to automatically realign the images and the blends, and have the show ready within five minutes of completing projector maintenance,” explains Zevchik.

The other major element of the upgrade was to replace the early-model AV Stumpfl SC-Master show controller with a system that would allow the programming of custom dinosaur shows for special events and educational tours. In addition to the audio, video and projection elements controlled by the new Wings Engine, the new AV Stumpfl AVIO network has 12 Wings IObox relay controllers tasked with running the 192 movement controllers that drive the animatronic models.

The entire system can now be controlled from a simple tablet device. Although the animatronic movements, audio, lighting and meteor shower are all programmed to run automatically, the tablet allows a user to initiate individual actions without disrupting the scheduled show. Additionally, scientific information about the animals and locations featured in the restaurant can be brought up in “tour” mode. For example, guests can learn about a mastodon and make one wave its trunk all from the palm of their hand. The system also allows for simple reprogramming for special events, and the intuitive interface allows for minimal training for users.