“Beyond All Boundaries” to receive top industry honor: a Thea Award from the Themed Entertainment Association 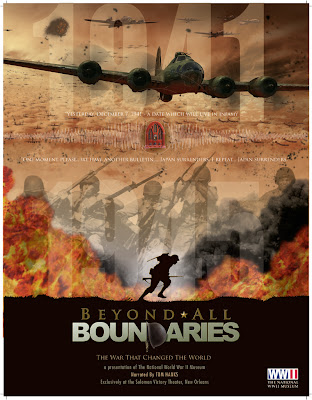 “Beyond All Boundaries,” the new multi-sensory cinematic experience at The National World War II Museum in New Orleans, was selected to receive a prestigious Thea Award by the Themed Entertainment Association. Tom Hanks served as executive producer and narrator for the 4-D presentation, which was commissioned by The National WWII Museum. Concept, design and production were led by The Hettema Group and their creative design team in conjunction with Museum staff and top historians.

“We are honored to share this award with the museum, and especially Gordon “Nick” Mueller, president and CEO of The National World War II Museum, whose bold vision first launched “Beyond All Boundaries” in our imaginations,” said Phil Hettema, President and Creative Executive, The Hettema Group. “We’re proud to have played a role in bringing that vision to life.”

“What the audience sees in front of them really happened,” says Mueller. “Be it digital animation, a celebrity voiceover in the first person, or actual historical video and audio, visitors can’t get any closer to the actual war experience than inside The Solomon Victory Theater.”

The challenge was to tell the story of World War II in a dramatic new way that would resonate with audiences of all ages.

“In order to capture the imagination of the younger generation, we used state-of-the-art technology and special theatrical effects to create an immersive, emotional experience,” said Hettema. “For older Americans, we absolutely made sure we got it right,” he added, “by working with leading historians, doing extensive research, utilizing archival photographs and footage, and ultimately paying homage by telling the story in the very words of those who were there.”

The five-year project incorporates state-of-the-art special effects immersing the audience in a unique cinematic experience. With life-sized props, animation, and atmospherics, as well as archival footage and sound effects, audiences feel the tank treads rumbling across North Africa’s deserts, brush snow from their cheeks during the wintry Battle of the Bulge, and flinch at anti-aircraft fire as it tries to bring down a B-17 on a bombing run over Nazi Germany.

Since 1994, the Thea Awards have become internationally recognized as a symbol of excellence and achievement within the themed entertainment industry. Significantly, the Thea Awards honor the vision and dedication of project owners while also recognizing the vital work of talented designers, technicians, vendors and suppliers who realize the vision.

The Thea Awards will be presented on March 12, 2011, in a sold-out event at the 17th Annual Thea Awards Gala, at the Globe Theatre, Universal Studios, Hollywood. Additional event information is available at www.teaconnect.org.

The Hettema Group, located in Pasadena, California, specializes in creative design, production and architecture for the world of experiential entertainment including museums, visitor centers, theme parks, and resort destinations. For more information: www.thehettemagroup.com.

The National World War II Museum tells the story of the American Experience in the war that changed the world – why it was fought, how it was won, and what it means today. Dedicated in 2000 as The National D-Day Museum and now designated by Congress as America’s National World War II Museum, it celebrates the American Spirit, the teamwork, optimism, courage and sacrifice of the men and women who fought on the battlefront and served on the Home Front. Twitter: WWIImuseum and on Facebook.

Judith Rubin
Judith Rubin ([email protected]) is a leading journalist, publicist, strategist, blogger, content marketing specialist and connector in the international attractions industry. She excels at writing about all aspects of design and technical design, production and project management. Areas of special interest include AV integration and show control, lighting design and acoustics, specialty cinema, digital video and world’s fairs. Judith has ties to numerous industry organizations. From 2005-2020 she ran communications, publications and social media for the Themed Entertainment Association (TEA). In 2013, she was honored with the TEA Service Award. She was development director of IMERSA, and co-chair of the 2014 IMERSA Summit. She was publicist for the Large Format Cinema Association in the 1990s, now part of the Giant Screen Cinema Association (GSCA) and has also contributed to the publications of PLASA, IAAPA and the International Planetarium Society. Already making her mark as a magazine and book editor, Judith joined World’s Fair magazine in 1987, which introduced her to the attractions industry. Launching as a freelancer in the mid 1990s she has contributed to dozens of publications and media outlets including Funworld, Lighting&Sound America, Sound & Communications, Urban Land, The Raconteur and The Planetarian. She joined InPark in 2010. Judith earned a Bachelor of Fine Arts from Pratt Institute. She has lived in New York City and the San Francisco Bay Area, and now makes her home in Saint Louis, where she is active in the local arts and theater community.
Share
Facebook
Twitter
Linkedin
Email
Print
WhatsApp
Pinterest
ReddIt
Tumblr
Previous articleWizarding World of Harry Potter to receive four Thea Awards March 12
Next articleCEDAR FAIR CREATES ADDITIONAL FINANCIAL FLEXIBILITY BY AMENDING ITS SENIOR SECURED TERM DEBT FACILITY