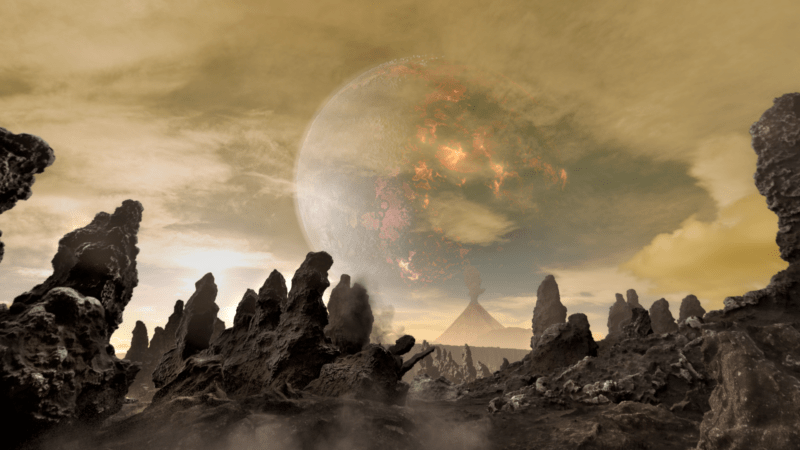 Birth of Planet Earth, a new 24-minute giant screen science documentary for digital fulldome cinemas, had its global premiere at the Zeiss-Großplanetarium in Berlin this month. The film is a co-production of Spitz Creative Media, the Advanced Visualization Lab at the National Center for Supercomputing Applications, and Thomas Lucas Productions, Inc., in association with Tellus Science Museum in Cartersville, Georgia.

According to Tim Florian Horn, Director of Zeiss-Großplanetarium: “Birth of Planet Earth looks at the very beginning of our planet and the unique requirements that enabled life to evolve. The new program helps us to develop a better understanding of the history of our very own existence on this pale blue dot we call home. It marks the beginning of a major program initiative focusing on the ‘System Earth’ at Zeiss-Großplanetarium in 2019.”

Narrated by Richard Dormer (Game of Thrones, Fortitude) and distributed by Spitz, Inc. and Evans & Sutherland, Birth of Planet Earth is now available for booking by planetariums, museums and educational institutions.

Birth of Planet Earth is the latest in a series of collaborations between Spitz, the AVL, and producer/director Thomas Lucas. It joins a library of successful prior collaborations, including Black Holes: The Other Side of Infinity, Dynamic Earth, and Solar Superstorms. According to Director Lucas, “Birth of Planet Earth allows us to successfully fuse high-end animation techniques from the team at Spitz Creative Media with supercomputer-produced scientific visualizations from the AVL.”

Dust grains that orbit the newborn Sun will clump together to form pebbles, rocks and planetoids. Credit: Spitz Creative Media.

Dr. Donna Cox, Director of the AVL since 2006, is a pioneer in the use of scientific data as a storytelling tool for television, fulldome, and IMAX documentaries. In 2017, Dr. Cox was honored for lifetime achievement by IMERSA, the fulldome visualization society. Under the CADENS (Centrality of Advanced Digitally ENabled Science) grant from the National Science Foundation, Cox’s team aims to increase digital literacy and inform the general public about computational and data-enabled scientific discovery. Cox and her team worked with leading researchers to produce many of the scientific numerical visualizations seen in Birth of Planet Earth.

“In one scene of Birth of Planet Earth,” said Dr. Cox, “AVL worked with a team of biophysicists to show a numerical model of photosynthesis and how early-Earth bacteria harvests energy from the Sun. This model uses supercomputers to calculate the complex atomic processes that enabled life on planet Earth to evolve and spread.”

The show portrays the rise of photosynthesis as part of a broader effort to present current theories about how events in the solar system positioned Earth for being a home to life. In another scene brought to vivid life by AVL, Earth collides with a neighboring proto-planet, Theia, resulting in the formation of our Moon. According to Cox: “Dr. Robin Canup of the Southwest Research Institute computed the astrophysics for the formation of the earth-moon system. Her numerical model, informed by moon rock analysis and physics, generates numbers that describe the physical dynamism of the collision that formed the moon.”

In the first 24 hours, some of the collision debris coalesces into what will become the Moon.  Remaining material will swirl around Earth for as much as a century, gradually accumulating onto the Moon, or falling back to Earth. Credit: Robin Canup, Southwest Research Institute. Visualization by Advanced Visualization Lab, National Center for Supercomputing Applications, U. of Illinois.

Birth of Planet Earth is an engaging show for audiences of all ages that complements the extensive, award-winning fulldome library available from Spitz Creative Media. Recommended for grades five and up, the film will be accompanied by teacher guides and STEM curriculum resources that encourage student engagement on concepts set forth in Birth of Planet Earth. These materials are being prepared by the staff of the Smithsonian-affiliated Tellus Science Museum in Cartersville, Georgia.

In addition to Berlin, Birth of Planet Earth has been booked in a number of planetariums and science centers throughout North America and in Europe. Additional foreign language soundtracks are currently in production. Birth of Planet Earth is now available for booking in 4K dome master format, with an 8K dome version and extended 4K television version available later this year.

The Advanced Visualization Laboratory’s (AVL) mission is to communicate science, inspiring audiences to learn about scientific concepts through capturing the thrill of scientific discovery and wonder of complex systems. Working in close collaboration with domain scientists, AVL creates high-resolution, cinematic, data-driven scientific visualizations. The lab is part of the University of Illinois’s National Center for Supercomputing Applications (NCSA), which is dedicated to providing powerful computers and expert support to help thousands of scientists and engineers across the country improve our world.

Thomas Lucas Productions, Inc. is a film editing and production company based in Armonk, New York. With productions that range from the vastness of space, to the depths of the ocean, to the center of volcanoes in amazing resolution, TLP is dedicated to making documentaries of the very highest quality.

Spitz Creative Media partnerships have resulted in some of the most successful fulldome films in circulation, including Dynamic Earth, Supervolcanoes, Solar Superstorms, Faster than Light and The Zula Patrol, now screening in hundreds of planetariums worldwide. The extensive Spitz fulldome content library also features such premium titles as the Denver Museum of Nature & Science production Black Holes: The Other Side of Infinity. Spitz is headquartered in Chadds Ford, Pennsylvania USA, and is a wholly owned subsidiary of Evans & Sutherland Computer Corporation.

Joe Kleimanhttp://wwww.themedreality.com
Raised in San Diego on theme parks, zoos, and IMAX films, InPark's Senior Correspondent Joe Kleiman would expand his childhood loves into two decades as a projectionist and theater director within the giant screen industry. In addition to his work in commercial and museum operations, Joe has volunteered his time to animal husbandry at leading facilities in California and Texas and has played a leading management role for a number of performing arts companies. Joe previously served as News Editor and has remained a contributing author to InPark Magazine since 2011. HIs writing has also appeared in Sound & Communications, LF Examiner, Jim Hill Media, The Planetarian, Behind the Thrills, and MiceChat His blog, ThemedReality.com takes an unconventional look at the attractions industry. Follow on twitter @ThemesRenewed Joe lives in Sacramento, California with his wife, dog, and a ghost.
Share
Facebook
Twitter
Linkedin
Email
Print
WhatsApp
Pinterest
ReddIt
Tumblr
Previous articleRusty Rustad returns to Weber Group
Next articleHan Jie joins Triotech as Sales Director for China