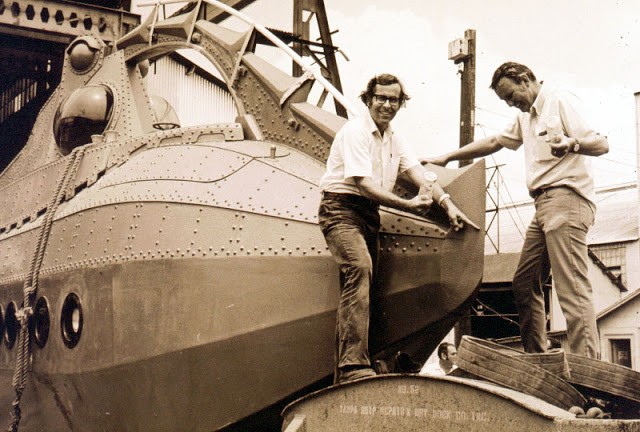 WE CONTINUE OUR COVERAGE OF DISNEY PARKS AND ATTRACTIONS FROM THE WALT DISNEY FAMILY MUSEUM IN SAN FRANCISCO, WHERE INPARK NEWS EDITOR JOE KLEIMAN REPORTS ON “BUILDING DISNEYLAND,” A PRESENTATION BY LEGENDARY ATTRACTION DESIGNER BOB GURR.

Bob Gurr is one of only a handful of designers to have been both awarded the TEA’ s Thea Award for Lifetime Achievement (1999) and named a Disney Legend (2004). “And I was fired from Disney,” he told a packed house at The Walt Disney Family Museum on Saturday, October 8, 2012. Gurr never discussed why he was fired, but that was all part of his off-the-cuff approach, speaking on those matters which interested him at the moment, and most importantly, interested his audience.

Throughout the presentation, a large selection of photos and schematics of his various projects flashed on a screen behind. He told the audience he didn’t really want to go over them, because that would take a long time. But one point during his talk, his eyes did stray towards the screen, where he noticed a photo of himself holding a bottle next to one of the Nautilus craft from the Magic Kingdom’s 20,000 Leagues Under the Sea attraction. “That’s a Corona in my hand,” he said, interrupting his existing comment on another topic. “The subs had come off the shipyards in Tampa and I think you’re supposed to use champagne. I didn’t have champagne, but I was drinking Corona, so there you go.”

Regardless of what direction Gurr’s thoughts went off to, they always centered on a central theme: curiosity. He started the talk discussing why Walt Disney was so successful in designing and building Disneyland in the 1950’s. “Walt walked around a lot, looked at everything, and talked to everyone. There was no red tape like you find today.” According to Gurr, meetings “are the biggest waste of time. They take people out of the work they should be doing and bring a stop to the project. Instead of pulling people away to meetings, Walt would talk to the people doing the work where they were doing it.”

He believes that Walt was a 100% curious person with an insatiable appetite for knowledge, “and the more you know, the less fearless you are.” In his post-Disney work, Gurr encountered two “Steve’s” who resembled Walt in this business approach – Steven Spielberg, for whom he worked on animatronic figures for Jurassic Park, and Steve Wynn, the Las Vegas tycoon who asked him to figure out a track system for a proposed hanging float parade on Fremont Street. Both of these business leaders had eliminated middle management in their organization and were able and willing to talk directly to those doing the work.

Bob, the self-proclaimed “Director of Special Vehicle Development” at Disney and master of animatronic technology, learned about vehicles by hanging around junkyards, which in turn taught him how to build cars. When Walt asked for a Lincoln figure that could perform twice the moves, but be half the weight of other audio-animatronic characters at the time, Bob looked at the inner workings of a WWII glider he was restoring, with its light-weight frame. “If you look inside the Lincoln figure,” he said, “you’ll notice that its skeleton is really an aircraft frame.” Later Lincoln figures are made of “pirate parts.” And as far as animatronic design goes, he gave very high marks to Garner Holt, who had manufactured a great many figures for the Disney Parks.

Arrow Dynamics, formerly of Mountain View, was also a company Bob keeps in high regard. They had manufactured many of the Disney rides and he learned from them ways to expedite projects. Efficiency was a key topic brought up many times during the talk. For instance, Joe Fowler, known as Admiral “Can Do,”was brought out of retirement to work on Disneyland because he had a reputation as a master of turning around damaged ships brought into the West Coast naval yards during WWII and sending them back into service.

Gurr was especially taken by the US Navy’s Nautilus, a nuclear vessel that became the first submarine to travel under the ice cap to the North Pole. He chose this model of submarine over the fictional Nautilus from the Disney film for Disneyland’s Submarine Voyage attraction. “We were testing it, trying to figure out how to simulate a drop into deeper water. We were going to drop it about three feet, when some genius just comes up and says ‘why don’t you just use bubbles?’” While discussing the attraction, Gurr related an incident where the submarine smashed against the scenery, busting a porthole, and letting water in. “The sub was designed so you could stand on the seats if water leaked in. Unfortunately, the sub was full of Japanese tourists and this happened on December 7.”

He had a special memory about Disneyland’s opening day. “Walt stuck me with these two kids of some Hollywood starlet and I was supposed to babysit them. So I took them on the Autopia and they kept encouraging me to bump the car in front of me, so I did. It went off the track and into the weeds and when I looked back, I saw an angry black man with an eye patch yelling at me. When I had a chance to look at all the photos of all the celebrities from opening day, I realized I had knocked Sammy Davis Jr. off the track. All because of these two kids.”

Gurr was asked if there was any memorable conversation he had had with Walt. “I have to be careful. This is a family show in more ways than one,” he said, nodding to Walt’s daughter, Diane Disney-Miller, who was in attendance, “We had an attraction called the Astro Jets. This was an off –the-shelf ride made by a German company. Well, there was an accident at an identical ride at the Santa Monica Pier and some woman had been crushed. So I was instructed to build a safety cage. It was ugly. Nobody wanted to tell Walt about it. So we hid it. But Walt was curious and found it.

“So one day, as I was getting out of my car at the Disneyland parking lot, Walt made a beeline for me and stuck his finger right in my chest.” Beeping out the expletives, Gurr related to the audience a one-way conversation that ended with, “I’m the one that makes the decisions around here. Now get rid of it!” Gurr has a special place in his heart for Walt. He loves the museum, which tells the story of Disney’s life from his 1901 birth to his death in 1966. But “I have to run through the last room and not look,” he said, “It’s too sad for me.”

He feels that the Disney way of designing attractions ended in 1972, with Walt Disney World up and running and layoffs in the aerospace industry resulting in an influx of engineers who were used to such corporate philosophies as middle management and meetings. There were important traits that he saw in Walt and his managers – they wouldn’t threaten if something wasn’t working right, they would invite the new and improvements, they talked the exact truth, and they were curious about the world around them.

Such traits still exist. A few days before his talk at the museum, Gurr was invited to attend a design charrette at former Imagineering Vice Chairman Marty Sklar’s home for a new concept being pitched in a foreign country. “Within an hour, an entire park had been fleshed out with artwork,” he said. “You encourage people and promise them martinis at Marty’s house afterward, and see what you can accomplish!”

Joe Kleimanhttp://wwww.themedreality.com
Raised in San Diego on theme parks, zoos, and IMAX films, Joe Kleiman would expand his childhood loves into two decades as a projectionist and theater director within the giant screen industry. In addition to his work in commercial and museum operations, Joe has volunteered his time to animal husbandry at leading facilities in California and Texas and has played a leading management role for a number of performing arts companies. Joe has been News Editor and contributing author to InPark Magazine since 2011. HIs writing has also appeared in Sound & Communications, LF Examiner, Jim Hill Media, and MiceChat. His blog, ThemedReality.com takes an unconventional look at the attractions industry. Follow on twitter @ThemesRenewed Joe lives in Sacramento, California with his fiancé, two dogs, and a ghost.
Share
Facebook
Twitter
Linkedin
Email
Print
WhatsApp
Pinterest
ReddIt
Tumblr
Previous articleCedar Point to Spend $60 Million on Renovations to Hotels and Beachfront Properties
Next articleImagineer Roger Broggie Jr. Passes Away