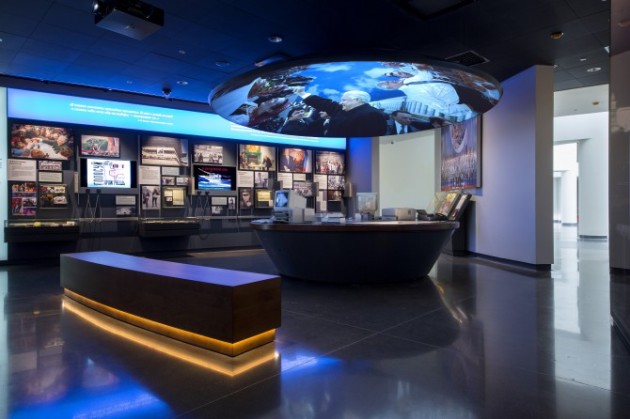 For this historic project, Persona’s team traveled the globe to shoot 133 exclusive interviews with political and cultural leaders, many of whom rarely speak in public, licensed footage from over 100 archival sources, and produced 163 media and interactive programs.

The BYPC tells the story of Russia’s first president Boris Yeltsin, and the decade from 1990 until 2000 that changed the course of Russia’s history. The fall of the Soviet Union, the development of a market economy, the advance of independent mass media, and thriving relationships with the West are brought to life through Persona’s documentary narratives, immersive installations and interactive experiential programs.

According to Abigail Honor, co-owner of Persona Films and Twitch Post and CEO of their parent company Lorem Ipsum Corp:

“The variety of the types of media in the museum really attracted us to this project. We were able to flex our creative muscles on large canvases 30 feet by 15 feet tall, huge columns, and 3D surfaces. We also had a chance to interview historic figures who have never been interviewed before and include them in a museum which would be the epitome of the 1990-s in Russia. We fell in love with the unique angle the museum takes, a personal one, on Boris Yeltsin. Our documentary storytelling background could come to the forefront as we heard unique stories about Yeltsin the man and were able to work with rare family footage.

“The biggest challenge was the sheer number of media pieces and the depth of the content within the interactive programs. We produced a thorough look at topics ranging from culture in the 1990-s to Russia’s international relations, and the content had to be factual and entertaining at the same time.

“Personally, I find the media program in the Freedom Gallery most exciting. This program enables a museum visitor to record their feelings on freedom and its importance or their memories of Yeltsin and have the recording inserted into the existing media program where world leaders including Bill Clinton and Tony Blair discuss the same topics. I think this is unique and a wonderful use of technology to support freedom of speech.”

Joe Kleimanhttp://wwww.themedreality.com
Raised in San Diego on theme parks, zoos, and IMAX films, InPark's Senior Correspondent Joe Kleiman would expand his childhood loves into two decades as a projectionist and theater director within the giant screen industry. In addition to his work in commercial and museum operations, Joe has volunteered his time to animal husbandry at leading facilities in California and Texas and has played a leading management role for a number of performing arts companies. Joe previously served as News Editor and has remained a contributing author to InPark Magazine since 2011. HIs writing has also appeared in Sound & Communications, LF Examiner, Jim Hill Media, The Planetarian, Behind the Thrills, and MiceChat His blog, ThemedReality.com takes an unconventional look at the attractions industry. Follow on twitter @ThemesRenewed Joe lives in Sacramento, California with his wife, dog, and a ghost.
Share
Facebook
Twitter
Linkedin
Email
Print
WhatsApp
Pinterest
ReddIt
Tumblr
Previous articleFireworks Festival Returns to Tivoli on December 25
Next articleJRA Develops New Look and Attractions for Renovated Children’s Museum of Atlanta