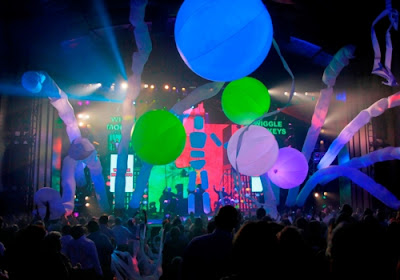 Opening to the public on Friday, February 24, the show will take guests on an incredible journey where they’ll join the Blue Men as they discover, engage and explore the world’s obsession with cutting-edge technology. New sections include Blue Men interacting with “GiPads” (think Gigantic iPads), a funny and perceptive look at contemporary modes of communication; and a pulsating new finale featuring an original Blue Man Group music score that will have guests jumping to their feet.

“The heart of our show is, and always has been, the Blue Man, and his inquisitive, wide-eyed take on the world,” said Chris Wink, who co-founded Blue Man Group with Phil Stanton and Matt Goldman. “Our team of artists at Blue Man Productions has created fun, even astounding new visual aspects of the show, and our music team has given us a great new sound. We are really excited to incorporate these elements into the show at Universal Orlando Resort.”

“This show will take one of Universal Orlando’s most popular experiences to a whole new level,” said Alice Norsworthy, Executive Vice President of Marketing and Sales for Universal Orlando Resort. “It’s the perfect complement to the incredible entertainment we offer at our destination.”

Several of the signature moments that have made Blue Man Group one of today’s best-loved theatrical productions will remain in the show, although in most cases, they have also been updated. And as always, the production will fuse innovative theatrical spectacle with improvisation and vaudeville-inspired comedy, art, science and irresistible music performed by the Blue Man Group live band.

“Many of our audience’s favorite pieces, including ‘Paint Drumming’ and ‘Gum Balls/Marshmallows’ will continue to be a part of the production – and yes, the first few rows will still need to wear ponchos,” added Phil Stanton, Blue Man Group co-founder. “But we have developed some brand new elements of the show that provide a larger-than-life, rousing, interactive experience that I hope will really speak to all cultures and give some of our most devoted fans a new reason to check us out again.”

ABOUT UNIVERSAL ORLANDO RESORT
There are many ways to enjoy your Orlando vacation – but there is only one Universal Orlando Resort. It is a completely separate destination featuring two theme parks, three magnificently themed on-site hotels and a nighttime entertainment complex. It’s the only Orlando destination where you are not just entertained – you are part of the most exhilarating entertainment ever created. You can soar above Hogwarts with Harry Potter, swing above the streets with Spider-Man, battle aliens alongside Agent J, and help Shrek save Princess Fiona in Shrek 4-D. You can be courageous, be outrageous – and be extraordinary.

Universal Orlando Resort is owned and operated by NBCUniversal, one of the world’s leading media and entertainment companies.  www.universalorlando.com

Joe Kleimanhttp://wwww.themedreality.com
Raised in San Diego on theme parks, zoos, and IMAX films, InPark's Senior Correspondent Joe Kleiman would expand his childhood loves into two decades as a projectionist and theater director within the giant screen industry. In addition to his work in commercial and museum operations, Joe has volunteered his time to animal husbandry at leading facilities in California and Texas and has played a leading management role for a number of performing arts companies. Joe previously served as News Editor and has remained a contributing author to InPark Magazine since 2011. HIs writing has also appeared in Sound & Communications, LF Examiner, Jim Hill Media, The Planetarian, Behind the Thrills, and MiceChat His blog, ThemedReality.com takes an unconventional look at the attractions industry. Follow on twitter @ThemesRenewed Joe lives in Sacramento, California with his wife, dog, and a ghost.
Share
Facebook
Twitter
Linkedin
Email
Print
WhatsApp
Pinterest
ReddIt
Tumblr
Previous articleCedar Fair Retains Spencer Stuart for Board of Directors Review
Next articleFlight Adventures Landing at Children’s Museum of Indianapolis