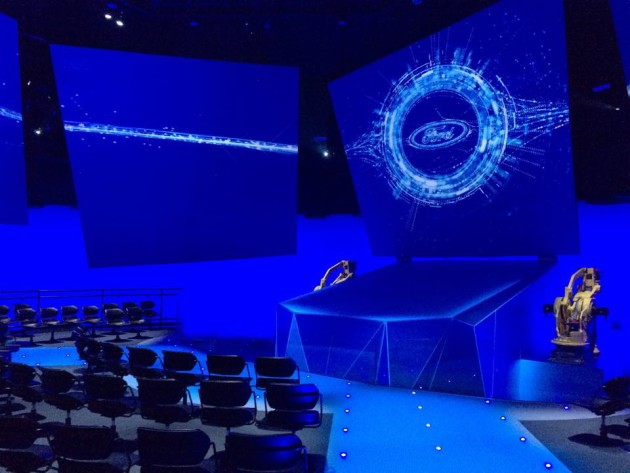 Burbank, CA, USA — The aluminum body 2015 Ford F-150 truck has been heralded as “one of the boldest moves being made in car-manufacturing today” and was recently named Truck of the Year at the Detroit Auto Show. BRC
Imagination Arts, an experience design agency that “Turns Brands Into Destinations,” has created a new immersive theatrical experience within the Ford Rouge Factory Tour in Dearborn, Mich. to celebrate and tell the story of this unprecedented engineering achievement.

The Manufacturing Innovation Theater is a multisensory exploration of Ford’s innovative manufacturing process, from concept to road. It mixes emotional storytelling with “jawdropping” media and technical effects to take guests on this incredible journey.

“The automotive industry is going through a major transformation right now as it faces a new decade of more stringent fuel efficiency requirements. Ford took a huge leap ahead of the pack with the new F-150. The Manufacturing Innovation Theater tells this inspiring story about human ingenuity, technological innovation and the future of 21st century manufacturing and transportation in a way that touches visitors emotionally and makes
them say ‘Wow!’” said Christian Lachel, executive creative director and vice president of BRC Imagination Arts.

For more than a decade, BRC Imagination Arts, The Henry Ford and The Ford Rouge Factory Tour have collaborated to create several of the most beloved visitor destinations in the United States. In 2014, TripAdvisor awarded the Ford Rouge Factory Experience a Certificate of Excellence and it named The Henry Ford one of the Top 25 museums in the United States.

Fred Huebener, Theaters Manager at the Michigan Science tells InPark of his recent visit to The Ford Rouge Factory Tour, “The new shows in the 4D and intro theaters are exceptional. The new 4D portion of the tour is by far the best STEM oriented theater experience in the country. The projection mapping, LED lighting, lasers, robotic arms, smoke, fans, smells and other special effects are Disney level awesome!”