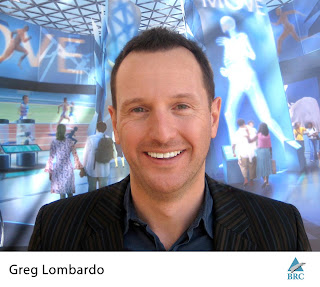 Lombardo, an integral member of the BRC team since 2008, has spent the last two years heading up the company’s development of the USA Pavilion at Shanghai World Expo 2010. One of the most popular pavilions at the Expo, the USA Pavilion has welcomed more than five million visitors since opening its doors in May.

A 20-year veteran of the entertainment industry, Lombardo has spent his professional life telling great stories as a writer, director and producer for feature films, theater and commercials. During his tenure with BRC, Greg has worked for many prestigious brands including GM, EMI, Abbey Road, China Mobile, Shanghai Automotive Industry Corporation, Guinness, and SyFy Channel.

As Creative Director, Brand Experiences, Lombardo oversees creative development for companies looking to create corporate brand centers; cities, states and regional governments that are investing in area attractions for economic development; and governments and corporations seeking an amazing presence at a World Expo.

“Greg possesses a rare combination of business and creative experience, making him a unique asset to BRC, his colleagues and every client project he touches,” said Tisa Poe, Vice President Entertainment Experiences & Brand Experiences. “His innate ability to understand how to best turn an organization’s brand into its story – one that can be experienced with emotion and leave an unforgettable impact – is witnessed by everyone who works with him.”

Prior to joining BRC, Greg served as Artistic Director for the National Shakespeare Company, where he directed and produced successful productions of Hamlet, Macbeth, Twelfth Night, Julius Caesar, and A Midsummer Night’s Dream. He also helped sell the Shakespeare brand itself, in his role as head fundraiser for America’s oldest touring theater company. Greg has also worked with Andersen Consulting to create and direct a first-of-its-kind live training program for major pharmaceutical firms. The program was so successful; it became a standard in the industry and is still widely used today.

Additionally, Greg has written, directed, and produced award winning feature films including Macbeth in Manhattan, Knots, and Bob Funk. His films have won the Audience Award, Long Island Film Festival, and Best Picture Award, Miami Film Festival. He has managed and produced multi-million dollar advertising campaigns and served as a production executive at Pictures In A Row, where he produced over 40 spots. Greg also wrote and directed commercials and industrial films that featured Orange County Choppers, National Hot Rod Association, Suzuki Motorcycle Race Team, and Gale Banks Racing. His work in commercials has earned him a Summit Award for Innovation and a Mobius Award.

ABOUT BRC IMAGINATION ARTS
Now in its 29th year, BRC Imagination Arts is an international leader in the design, creation, and production of innovative and immersive branded attractions, visitor centers, world-class museums, and world expo pavilions for a wide range of corporate, not-for-profit, city, regional development and government clients around the world. BRC clients include the Abraham Lincoln Presidential Museum, China Mobile, China Telecom, Heineken, Ford Motor Company, General Motors, NASA, and Universal Studios, among many others. With offices in California, The Netherlands, China, and the United Kingdom, BRC has been honored with over 275 international awards for creative excellence including two Academy Award nominations, and 16 THEA Awards for Outstanding Achievement in themed entertainment. The company is currently engaged in projects in the United States, Asia, Europe, and the Middle East.

Judith Rubin
Judith Rubin ([email protected]) is a leading journalist, publicist, strategist, blogger, content marketing specialist and connector in the international attractions industry. She excels at writing about all aspects of design and technical design, production and project management. Areas of special interest include AV integration and show control, lighting design and acoustics, specialty cinema, digital video and world’s fairs. Judith has ties to numerous industry organizations. From 2005-2020 she ran communications, publications and social media for the Themed Entertainment Association (TEA). In 2013, she was honored with the TEA Service Award. She was development director of IMERSA, and co-chair of the 2014 IMERSA Summit. She was publicist for the Large Format Cinema Association in the 1990s, now part of the Giant Screen Cinema Association (GSCA) and has also contributed to the publications of PLASA, IAAPA and the International Planetarium Society. Already making her mark as a magazine and book editor, Judith joined World’s Fair magazine in 1987, which introduced her to the attractions industry. Launching as a freelancer in the mid 1990s she has contributed to dozens of publications and media outlets including Funworld, Lighting&Sound America, Sound & Communications, Urban Land, The Raconteur and The Planetarian. She joined InPark in 2010. Judith earned a Bachelor of Fine Arts from Pratt Institute. She has lived in New York City and the San Francisco Bay Area, and now makes her home in Saint Louis, where she is active in the local arts and theater community.
Share
Facebook
Twitter
Linkedin
Email
Print
WhatsApp
Pinterest
ReddIt
Tumblr
Previous articlePGAV Destinations Hosts Educational Institute
Next articlePLASA announces 2010 Innovation Award recipients