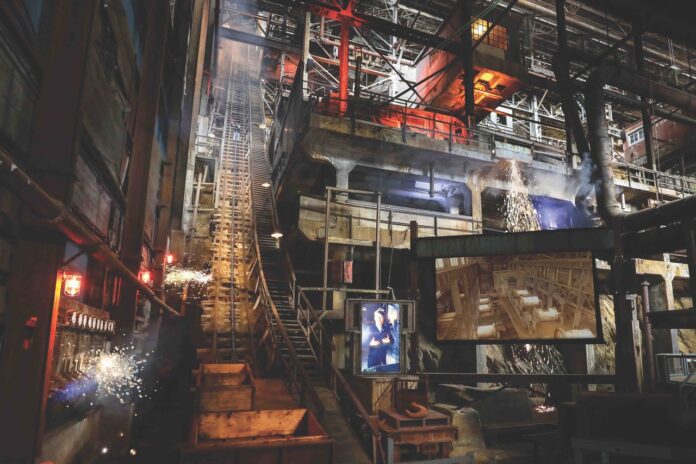 The Britannia Mine Museum is pleased to announce that its BOOM! Mill Show has won a prestigious TEA Thea Award for Outstanding Achievement (Museum Experience, Limited Budget category) announced at the International Association of Amusement Parks and Attractions (IAAPA) Expo 2021 in Orlando, Florida.

Other award honorees include Universal Studios Japan’s Super Nintendo World, and Universal Studios Hollywood’s “The Secret Life of Pets: Off the Leash!”. Last year in 2020, the National Geographic Museum in Washington, DC received this award in the same category for their “Becoming Jane: The Evolution of Dr. Jane Goodall” exhibition.

“We are most honoured to receive this award for our BOOM! Mill show, especially amongst such renowned international attractions like Universal Studios and Disneyland Resorts,” says Cheryl Hendrickson, Executive Director of the Britannia Mine Museum.

BOOM! is the Britannia Mine Museum’s live-action, multi-sensory special effects story-telling experience that brings the historic 98-year-old Mill No. 3 building, a National Historic Site, back to life. The theatrical spectacle transports visitors back in time to the 1920s when the Mine was booming as the largest copper producer in the British Commonwealth. The show shares the magical story of the awe-inspiring 20-storey architectural marvel as one of North America’s last gravity-fed concentrator mills, as it processed precious minerals from the ore extracted from the mine.

“Our BOOM! Mill show is the culmination of a multi-year journey from inspiration to completion between the Museum’s staff and our Board of Directors,” says Leonie Tomlinson, Chair of the Britannia Mine Museum Board of Directors. “This wouldn’t have been possible without the support and contribution of our Mining Industry, the Government of Canada, the Province of BC, as well as community partners who have all helped enable us to share the stories, history and significance of Britannia with the world.”

BOOM! includes collaborations with show designer and producer Vista Collaborative Arts as well as Dynamic Attractions from Port Coquitlam, BC.

Dynamic Attractions, whose international projects include rides at theme parks such as Universal Studios and Disney, engineered and fabricated the Museum’s movable skip for the Mill show which demonstrates how mining equipment was hauled up and down the 20-storey Mill building. The skip set was decorated by Bold Creative and 3DS and transformed to an authentic, vintage-looking Museum piece that fit with the atmosphere of the historic Mill building and engineered to thrill audiences.

Vista Collaborative Arts, BOOM!’s show designer and producer has produced themed attractions around the world including creating the immersive production The Sleeping Giant for the Museo del Acero in Monterrey, Mexico. Vista Collaborative Arts brought a team of talented film producers, lighting, sound and special effect experts from across Canada, many of whom work with IMAX and Cirque du Soleil.

“We are a small but mighty Museum located along the scenic Howe Sound waters of British Columbia between Whistler and Vancouver,” continues Hendrickson. “We not only entertain visitors as a tourist attraction with our underground mine train, exhibits, and gold panning, but we also educate them about Britannia’s 70-year mining history, its environmental remediation of Howe Sound, and stories of the more than 60,000 people who came to work and live at Britannia from all over the world.”

The 28th Annual Thea Awards Gala will be held April 23, 2022 at the Disneyland Hotel in Anaheim California.