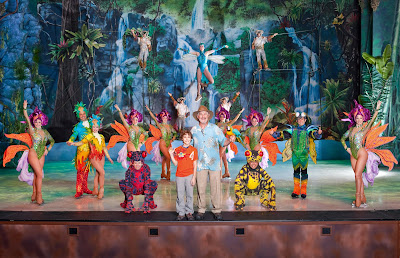 Tampa, FL, USA (February 1, 2012) — For more than five decades, Busch Gardens Tampa Bay has set the industry’s standard for delivering unforgettable entertainment experiences, with Broadway-style stage spectaculars like KaTonga: Musical Tales From the Jungle and innovative ice shows like World Rhythms on Ice. Iceploration builds on that tradition and introduces audiences to the next generation of ice shows.

Iceploration inspires audiences to “explore the world” on a 30-minute journey to the four corners of the earth. This multi-sensory story, told through theatrical skating and an all-new original score, is the collaboration of an award-winning creative team with Broadway credentials, including Tony Award-winning costume designer Gregg Barnes (The Drowsy Chaperone, Best Costume Design Tony winner 2007; Legally Blonde the Musical, Best Costume Design Tony nominee 2007).

The 30-minute show opens with Austin, a digitally savvy preteen, who believes that technology has made his generation more connected to the world than ever before. But his grandfather – and old-world explorer – argues that the boy is more disconnected than he realizes, and takes him on an adventure around the globe. Through their travels they visit the African Serengeti, Great Barrier Reef, the Arctic and the Amazon rainforest.

The adventure unfolds as they arrive in the African Serengeti. Here, larger-than-life puppets and spectacular set design bring elephants and other awe-inspiring animals to life at a watering hole. Solo and chorus skating performances accompanied by acrobatics tell an anecdote of an agile cheetah stalking graceful gazelles and meerkats.

Austin and Grandpa then dive into the Great Barrier Reef to explore the harmony of life on the ocean floor. An amazing black light transition and never-before-seen helium-filled puppets immerse the audience in the wonders of the sea, filled with parrotfish and lionfish, sea urchins, turtles and a moray eel.

In the Arctic, majestic skaters become striking snow flurries as a winter storm threatens the travelers. Austin and Grandpa witness even more beauty as they encounter the Aurora Borealis phenomenon, represented with theatrical lighting and projections. Then, they share the stage with amazing live animal stars, including a Siberian lynx and a sled of Siberian huskies as they continue to traverse the tundra.

Austin and Grandpa wrap up their adventure around the globe immersed in the lush, tropical Amazon Rainforest. Squirrel monkeys, sun conures and colorful macaws fill the air as playful frogs and a graceful dragonfly skate into the grand finale: a new signature song called “Meet the World.”

Joe Kleimanhttp://wwww.themedreality.com
Raised in San Diego on theme parks, zoos, and IMAX films, Joe Kleiman would expand his childhood loves into two decades as a projectionist and theater director within the giant screen industry. In addition to his work in commercial and museum operations, Joe has volunteered his time to animal husbandry at leading facilities in California and Texas and has played a leading management role for a number of performing arts companies. Joe has been News Editor and contributing author to InPark Magazine since 2011. HIs writing has also appeared in Sound & Communications, LF Examiner, Jim Hill Media, and MiceChat. His blog, ThemedReality.com takes an unconventional look at the attractions industry. Follow on twitter @ThemesRenewed Joe lives in Sacramento, California with his fiancé, two dogs, and a ghost.
Share
Facebook
Twitter
Linkedin
Email
Print
WhatsApp
Pinterest
ReddIt
Tumblr
Previous articleVIDEO: MacGillivray Freeman’s One World One Ocean Project Presents Preview of Online Digital Media
Next articleDiscovery Place to host Democratic National Convention Party