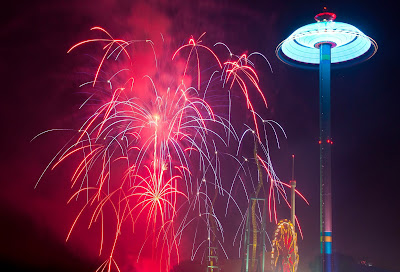 The new agreement includes product offerings and fully-integrated marketing and sponsorship opportunities designed to maximize marketing collaboration and activation. Coca-Cola beverages will be made available to park guests throughout Cedar Fair’s regionally dispersed network, which encompasses 11 amusement parks, 6 waterparks and 5 hotels, including Cedar Point, which has been voted the “Best Amusement Park in the World” for 15 consecutive years. Guests will have the opportunity to purchase the beverages at a broad array of venues throughout the parks, including restaurants, mobile carts and vending areas. Products will include Coca-Cola®, Diet Coke®, Sprite®, Coca-Cola Zero™, PowerAde® and Dasani® bottled water, along with energy drinks, teas and juices.

“We are thrilled to be partnering exclusively with The Coca-Cola Company,” said Bob Wagner, Cedar Fair’s corporate vice president of strategic alliances. “We look forward to developing a comprehensive alliance which enables park guests to create memorable moments with their family and friends while enjoying Coca-Cola’s iconic brands. We welcome the opportunity to take our relationship with The Coca-Cola Company to the next level through new marketing initiatives and products which will be debuted next year.”

Through the agreement, Cedar Fair and Coca-Cola will co-develop and introduce comprehensive marketing initiatives which will capture the attention of guests through a broad range of mediums, including property specific programs and campaigns tailored specifically to regional preferences. In addition, Cedar Fair and Coca-Cola will launch a fully integrated joint campaign, targeting broader audiences through social media, TV, radio, internet and cinemas.

“We are excited by the opportunity to expand our relationship with Cedar Fair and refresh guests with our broad array of brands,” said Stefanie Miller, group vice president of strategic partnership marketing, Coca-Cola Refreshments. “We look forward to leveraging our brands, programs and resources to enhance the guest’s experience when they Open Happiness with a Coca-Cola during their next visit.”

Joe Kleimanhttp://wwww.themedreality.com
Raised in San Diego on theme parks, zoos, and IMAX films, Joe Kleiman would expand his childhood loves into two decades as a projectionist and theater director within the giant screen industry. In addition to his work in commercial and museum operations, Joe has volunteered his time to animal husbandry at leading facilities in California and Texas and has played a leading management role for a number of performing arts companies. Joe has been News Editor and contributing author to InPark Magazine since 2011. HIs writing has also appeared in Sound & Communications, LF Examiner, Jim Hill Media, and MiceChat. His blog, ThemedReality.com takes an unconventional look at the attractions industry. Follow on twitter @ThemesRenewed Joe lives in Sacramento, California with his fiancé, two dogs, and a ghost.
Share
Facebook
Twitter
Linkedin
Email
Print
WhatsApp
Pinterest
ReddIt
Tumblr
Previous articleDataton Projects the Horrors at Muncaster Castle
Next articleDisney Acquires Lucasfilm and Subsidiaries for $4 Billion