Celebrate the 4th with Cedar Fair 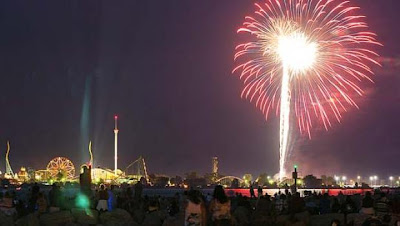 Knott’s Berry Farm
Open 10 am – 10 pm
Knott’s Berry Farm, Knott’s Soak City water parks- Orange County, San Diego and Palm Springs are pleased to announce that they will offer FREE admission to active and retired United States Military personnel July 2-6 as part of their Tribute to the Armed Forces program. In addition, active and retired members of the U.S. military will be able to purchase discounted admission tickets for members of their immediate family (maximum of six) for Knott’s Berry Farm ($32.99) and Knott’s Soak City water parks ($27.99)at the gate. A valid military ID must be presented during time of ticket purchase at gate.

Gilroy Gardens
Open 10 am – 6 pm
June 30 – July 4 and September 1 – 3 • Join us in saluting our heroes! Active Duty Military personnel get FREE ADMISSION to the park, on the dates listed above, when presenting an Active Duty Military ID—one complimentary admission per ID.

June 30 – July 4 • Come celebrate with us! The Park will host a special All-You-Can Eat BBQ in the South County Picnic Grove from noon to 2:00pm.

World’s of Fun
Open 10 am – 11 pm
Worlds of Fun and Oceans of Fun are offering FREE admission to active, reserve, retired, and veteran U.S. military personnel on July 3 – 5.

Worlds of Fun lights up the sky with a huge fireworks show on Wednesday, July 4, PLUS every Saturday in July! Fireworks begin at 10 pm.

Valleyfair will light up the sky on select evenings from June 1 – August 25 with a Fantastic Fireworks display. Fireworks begin at 9:50pm on every night the Park is open until 10pm or later. An extended Fantastic Fireworks show will be presented Wednesday, July 4, 2012.

Michigan’s Adventure
Open 11 am – 9 pm
No events or fireworks have been announced for this park.

Kings Island
Open 10 am – Midnight
Kings Island prides itself on providing world-class thrills, fun and family entertainment for guests of all ages. Kings Island is also proud of the brave men and women who serve in the U.S. military and is pleased to announce plans for its Tribute to the Armed Forces program during the 2012 season.

Kings Island’s Tribute to the Armed Forces program will offer a free regular admission ticket to any active or retired military personnel Memorial Day weekend and over the Fourth of July. Along with free admission, active and retired members of the military will be able to purchase discount admission tickets for members of their immediate family (maximum of six) at a special military discount price of $29.99. A valid military ID must be presented at the Kings Island ticket window July 3-5 to receive this offer.

Kings Island lights the fuse on one of the Midwest’s largest and most impressive Fourth of July fireworks displays. This colorful pageant in the sky set against the backdrop of the park will be 10 times the size and scope of the traditional nightly fireworks display at the park, creating an experience unlike any other in the Tri-State region. To keep the excitement in high gear, Kings Island will stay open until Midnight July 4, giving guests the chance to experience and enjoy even more thrills.

Cedar Point
Open 10 am – Midnight
Any active, retired or honorably-discharged member of the United States Armed Forces can receive one (1) free regular admission ticket to Cedar Point. Fireworks will take place at 10:30 pm following a 9:15 pm performance of Luminosity.

Join us for the LARGEST and BEST fireworks display in Dorney Park’s history! We plan to treat our guest with the GREATEST firework display in the state to celebrate our nation’s birthday. You won’t want to miss it! Show starts at 9:30 pm, then stay for one last ride as the park is open until 11:00 pm.

*Free Admission only valid on July 3 & 4 for those qualifying with a valid US military I.D.

Carowinds
Open 10 am – 10 pm
Join us May 27-28 and July 3-4 for the third annual Military Days! Carowinds salutes our brave military service men and women by offering FREE park admission to any active, inactive or retired United States Service men and women with a valid military I.D.
*Free Admission only valid on May 27 & 28 and July 3 & 4 for those qualifying with a valid US military I.D

Joe Kleimanhttp://wwww.themedreality.com
Raised in San Diego on theme parks, zoos, and IMAX films, Joe Kleiman would expand his childhood loves into two decades as a projectionist and theater director within the giant screen industry. In addition to his work in commercial and museum operations, Joe has volunteered his time to animal husbandry at leading facilities in California and Texas and has played a leading management role for a number of performing arts companies. Joe has been News Editor and contributing author to InPark Magazine since 2011. HIs writing has also appeared in Sound & Communications, LF Examiner, Jim Hill Media, and MiceChat. His blog, ThemedReality.com takes an unconventional look at the attractions industry. Follow on twitter @ThemesRenewed Joe lives in Sacramento, California with his fiancé, two dogs, and a ghost.
Share
Facebook
Twitter
Linkedin
Email
Print
WhatsApp
Pinterest
ReddIt
Tumblr
Previous articleCelebrate the 4th at Six Flags Parks
Next articleSuperman Soars to New Heights at Six Flags Discovery Kingdom