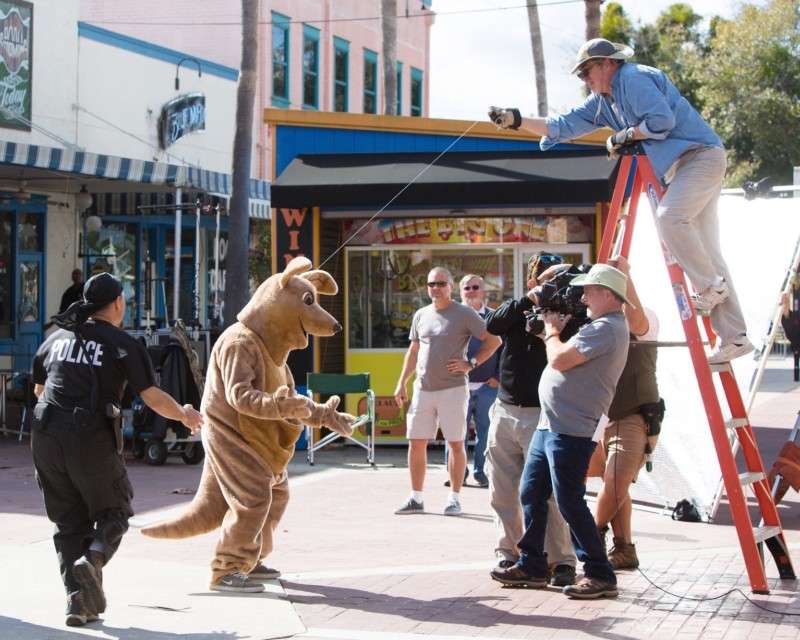 InPark: Where did the idea for CHARACTERz originate?

Lisa Enos Smith: Jon and I have deep roots in the theme park business. One of my first jobs was as an Animal Educator at Busch Gardens Tampa; Jon’s first job was as a costumed character at SeaWorld in San Diego. Every character in the film is drawn from people we’ve known or worked with over the years…maybe exaggerated a little for comic effect, of course.

Jon Binkowski: Lisa and I tapped into a lot of our personal theme park history when writing CHARACTERz.

Smith: At one level, CHARACTERz is a sort of love letter to the industry. But even though it’s about this unique sub-culture, it’s also universal. Everybody can relate to getting involved in something that doesn’t pay much, that people misunderstand, that you work yourself ragged doing, but you still love it.

IPM: What were some of the challenges in filming CHARACTERz?

Binkowski: There are a lot of challenges in making “Ultra Low Budget” films, beyond the obvious inherent lack of funds. We had a handshake deal with a local amusement/ride park; two locations, lots of background potential, etc. Then, just a few days before shooting, we get a call. ‘Changed our minds,’ they said. ‘Thanks but no thanks.’ Fortunately, the good folks at Gatorland and Old Town Kissimmee really came through.

Smith: The shooting schedule was tight; it had to be to stay on budget. We couldn’t afford to add days, or keep the pro crew guys on into overtime, which meant we sometimes had to scramble just to catch the last of the daylight available.

IPM: The Moody Blues plays a role in the film; what’s the connection?

Binkowski: “The Moodys” (as they call themselves) and I go back to when we worked on an awesome dark ride at the infamous Hard Rock Park. I got to know the band very well as we re-orchestrated “Nights in White Satin” and worked together with dark ride company Sally Corporation to create a unique attraction based on the song. It is still talked about on the internet today! Well, that relationship exists to this very day and they were happy to help me with CHARACTERz. They are wonderful guys.

IPM: Did you have any messages you wanted to convey through the movie to folks in the industry?

Smith: Just our sincere love for the industry. For most of us, this crazy business is our lives. We have made life-long friends, fallen in love and even introduced our children to the industry. I guess the message is: “Working in the industry can be dysfunctional at times, but we wouldn’t want to do anything else!”

IPM: Can we expect a sequel or other films in the works?

Smith: Oh yes! Actually, we are in pre-production for a sequel to our second feature, The Visitant. This little paranormal thriller has well over 2 million views on YouTube alone. ReVisitant will be shooting this summer.

IPM: How has your film work informed your theme park design work?

Binkowski: The film reminded us that, sometimes, it’s the little things that people take away from an amusement experience. The first time a kid met a costumed character can be as impactful as the most elaborate multimedia spectacular. It’s a lot of hard work, wedged in between our ‘real’ paying gigs. They’re not blockbusters; nobody’s going to buy our action figures. We don’t make a lot of money. But we love making movies. • • •

CHARACTERz was shot in 4K and produced with a 5.1 audio track. It is available for viewing on a variety of platforms including iTunes, Amazon, YouTube, Vudu, Google Play and Vimeo on Demand. www.characterzmovie.com

Joe Kleimanhttp://wwww.themedreality.com
Raised in San Diego on theme parks, zoos, and IMAX films, InPark's Senior Correspondent Joe Kleiman would expand his childhood loves into two decades as a projectionist and theater director within the giant screen industry. In addition to his work in commercial and museum operations, Joe has volunteered his time to animal husbandry at leading facilities in California and Texas and has played a leading management role for a number of performing arts companies. Joe previously served as News Editor and has remained a contributing author to InPark Magazine since 2011. HIs writing has also appeared in Sound & Communications, LF Examiner, Jim Hill Media, The Planetarian, Behind the Thrills, and MiceChat His blog, ThemedReality.com takes an unconventional look at the attractions industry. Follow on twitter @ThemesRenewed Joe lives in Sacramento, California with his wife, dog, and a ghost.
Share
Facebook
Twitter
Linkedin
Email
Print
WhatsApp
Pinterest
ReddIt
Tumblr
Previous articleReagan Library: Inside the Situation Room
Next articleJeremy Railton: A designer’s notebook

InPark Tracks: Coming soon to a podcast near you