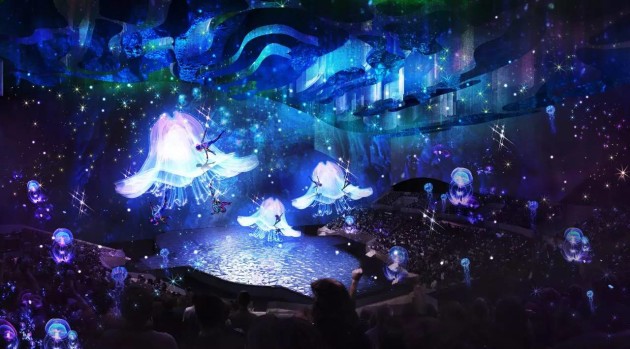 ABOVE: Conceptual art for Aurora Goddess at Chimelong Ocean World

Already profiled by InPark as part of the resort’s second phase are a 10-acre indoor marine life park and a wildlife park. Construction is set to begin soon on the Chimelong Wild Animal Kingdom, which will feature both daytime and nighttime safari components along with media presentations and live shows.  At the end of December, Zimbabwe’s Minister of the Environment, Oppah Muchinguri, visited the site of the future Chimelong Qingyuan International Forest Resort, where 24 elephants imported from Zimbabwe are currently residing.  The Minister affirmed the country’s conservation partnership with Chimelong, which will result in at least 170 additional elephants and other animals being housed at the Qingyuan and Zhuahai resorts. 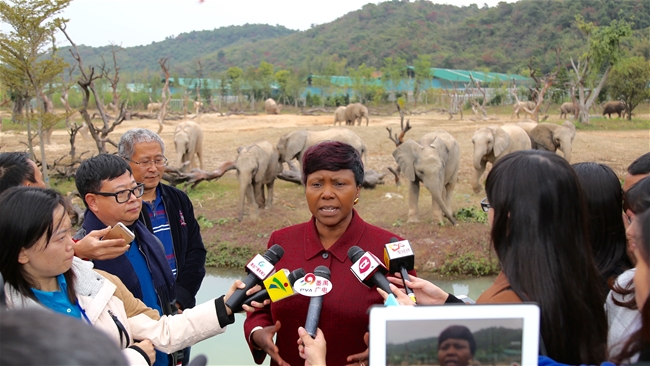 The marine life park, now called Chimelong Ocean World, originally reported by InPark as an expansion of Ocean Kingdom, will be a separately gated park with a themed bridge connecting it to the rest of the resort.  Construction of Ocean World began earlier this month.

Ocean World will have a high tech theme throughout, from the radiating arcs of the architecture to the virtual reality experiences inside.  Separated into 10 unique zones, the park will feature animals from both the Northern and Southern Hemispheres, which can be viewed via an 800 meter (2600 foot) acrylic tunnel.  Models, lighting, and visual effects will create the experience of visiting an ancient seabed with extinct fish and other sea creatures. Interactive multimedia terminals throughout the park will tell the story of particular species of animals, allowing children to learn about how they live in the ocean. 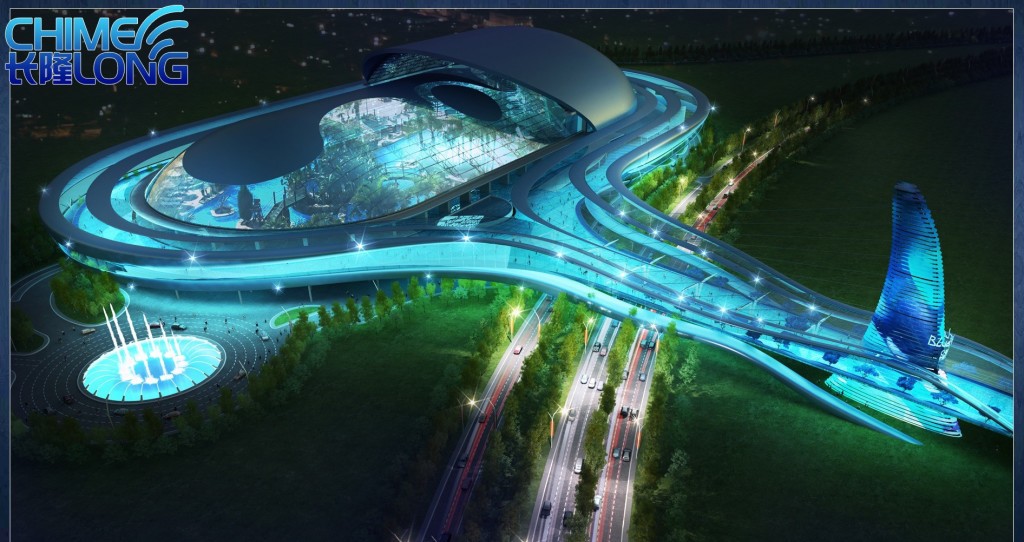 A number of new attractions in Zhuhai will take advantage of a land reclamation project similar to the one that resulted in Macau’s Cotai Zone.  The island of Hengqin, on which Chimelong Zhuahai Resort lies, will be doubled in size, with the local government encouraging Hong Kong firms to take advantage of the additional land being made available.

One such company taking advantage of the Hengqin New Area is Lai Fung Holdings, which outside of Zhuhai is building a hotel in conjunction with Hong Kong Ocean Park at the entrance to that iconic Hong Kong attraction.  In Zhuhai, Lai Fung is investing in Hegqin’s “Creative Culture City,” building two indoor immersive experience centers based on licensed IP – one themed to National Geographic and the other to six unique Lionsgate properties.  Lai Fung has also recently announced plans to build a high-end medical check-up and medical beauty center, themed wedding venues, corporate headquarters, a themed hotel managed by the Hyatt Corporation, and Asia’s largest music performance center in the Creative Culture City.

Of the two Chimelong parks likely to take advantage of the land reclamation, one is a waterpark that will primarily be built indoors, providing year round operation.  Chimelong plans for it to be larger than its current waterpark at the Chimelong Guangzhou Resort.  The fourth planned Chimelong park, Future World Science and Technology Theme Park, has been compared by Chimelong management to Disney’s EPCOT, and will continue the company’s tradition of combining education with entertainment and Chinese cultural values.

Chimelong anticipates annual visitation at its Chimelong Zhuhai Resort to increase to over 50 million once all five theme parks are operating.

Joe Kleimanhttp://wwww.themedreality.com
Raised in San Diego on theme parks, zoos, and IMAX films, InPark's Senior Correspondent Joe Kleiman would expand his childhood loves into two decades as a projectionist and theater director within the giant screen industry. In addition to his work in commercial and museum operations, Joe has volunteered his time to animal husbandry at leading facilities in California and Texas and has played a leading management role for a number of performing arts companies. Joe previously served as News Editor and has remained a contributing author to InPark Magazine since 2011. HIs writing has also appeared in Sound & Communications, LF Examiner, Jim Hill Media, The Planetarian, Behind the Thrills, and MiceChat His blog, ThemedReality.com takes an unconventional look at the attractions industry. Follow on twitter @ThemesRenewed Joe lives in Sacramento, California with his wife, dog, and a ghost.
Share
Facebook
Twitter
Linkedin
Email
Print
WhatsApp
Pinterest
ReddIt
Tumblr
Previous articleChina’s Wanda Group to Develop $10 Billion Industrial Park and “Cultural Tourism City” in India
Next articleAtlantis Developers Close to Finalizing Land Deal for $2 Billion Hawai’i Resort