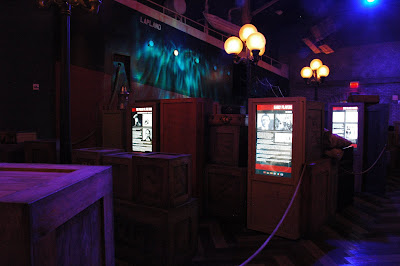 I’ve been to Las Vegas dozens of times, both for work and for pleasure, and while I like to partake of many of Sin City’s delights, I can’t say that I often think of the town’s connection to the world of organized crime. I always sort of knew there was a correlation, but never really understood how Vegas was ultimately shaped by the mob. At least not until I took a tour through the new Las Vegas Mob Experience at the Tropicana Resort.

Housed in a former convention area that previously played home to the traveling Titanic Exhibit, the Las Vegas Mob Experience is a blend of live action, technology-enhanced choose-your-own-adventure and museum-quality archive.
Groups start by choosing a mentor and receiving RFID-tagged lanyards inscribed with their mafia name. The attraction queue is a shipyard, detailed and dimly lit. Here, where organized crime arrived in America for the first time, groups learn about the real-life characters they are about to meet inside. Large monitors display information and photos on key mafia families. The technology is being set up to respond to the RFID tags and translate the text based on who is standing in front of the screen.
Once inside, we are transformed into a cityscape, where our mentor greets us via video and hands us off to our first live actor. As we move through the streets, the lighting changes to follow us, and when we arrive with the first actor, he calls us by name – pretty cool.
Without revealing too much, this first act of the experience allows us the opportunity to get involved with the Mafia, completing small but meaningful tasks that will affect the end of the experience for us. Unbeknownst to us, each actor has access to a hidden iPad that displays our names and allows them to rate us on our actions and words.
We start to learn more about the mob here, and learn about key players that helped to create what Vegas is today. This transitions into the second act, which is the more traditional museum section. Here, artifacts purchased and leased from family estates are displayed. Everything from personal letters to home movies is available for inspection, and the display monitors do a good job of correlating specific items to larger themes in the Las Vegas story. 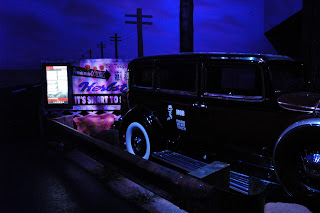 In this section, you are free to move around at your leisure, spending as much or as little time as you wish.
The third act takes you through the demise of organized crime in Vegas, through realistic sets, projection and informative displays. But before the experience ends, it’s time to find out how your group did at “playing mafia.” This is where all the scores you received from the actors really matter. Your group is ushered into a back-alley room where you come face to face with the mob boss. The decisions you made in act one dictate your experience here. Naturally, since my group was made up of people who do what they are told (and who also lie really well!), we were welcomed into the Mafia family. Others might not be so lucky. Your group can also be arrested, put into witness protection, or, well….eliminated.
The entire experience was put together with the help of Visioneering, a themed design and entertainment company with offices around the country. The attention to detail and the level of theatrical precision makes the experience realistic and enthralling. My mob knowledge was pretty much non-existent before taking the tour, yet it kept my interest and gave me enough information to help me understand what was going on, and to also want to learn more. My guest, on the other hand, claims to have some mafia connections in her distant family and professes a love of mafia culture. She was “fascinated” by the artifacts and depth of information available.
Although there aren’t many entertainment venues in Vegas that attempt to educate guests, the Las Vegas Mob Experience does exactly that in a subtle and entertaining way, with enough intrigue and suspense to make even the most relaxed Vegas vacationer squirm, even if it’s only while “Big Leo” is watching.
http://www.lvme.com

Look for more on the technology and design behind the Las Vegas Mob Experience in InPark Magazine soon!