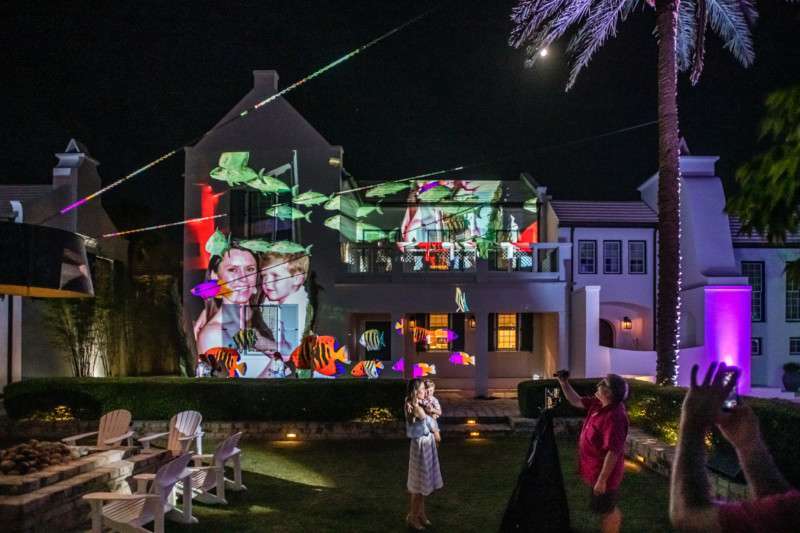 Around the world, a growing number of festivals and attractions are bringing spectacular shared experiences to cities and towns that want to celebrate art and architecture in the biggest and brightest ways – using the latest projection mapping and large-scale projection tools.

These techniques aren’t new in themselves – projection mapping has been deployed in academia and themed attractions for decades – but the adoption of projection technology in special events, sports venues, public artworks and festivals is more recent. And these newer applications are transforming the way we use the technology; creating bolder and more daring installations that offer nothing short of a ‘wow’ factor.

Projectors have become lighter and brighter, and some now offer an expanded color gamut that can more fully realize an artist’s vision – or an IP holder’s requirements – in reproducing images or content. Coupled with powerful content management tools including processing, automated image warping and blending and show control, it’s no surprise that large-scale projections and projection mapping are becoming more widely adopted as they spark interest and enthusiasm among the creative and technical community.

There’s a roster of festivals and installations around the world that are expanding the idea of digital artwork, serving as platforms for something bigger, more diverse and more spectacular – and in some instances, with audience participation. Canvases include buildings, landmarks, sculptures and even water features – non-traditional surfaces that help tell a story and create an experience that can’t be replicated elsewhere.

In the case of Digital Graffiti, an annual digital art festival in Alys Beach, Florida, artists from all over the world take up residence in the small town for a weekend each spring, displaying a selection of immersive, projection-based art on the distinctive white architecture of the town. Named one of the “24 Unconventional Art Destinations Around the World” by National Geographic, Digital Graffiti brings guests and artists together to celebrate and showcase a selection of curated digital art that is unique to the festival.

Digital Graffiti’s residency artists brought interactive elements to their installations for 2019, with processing and projection provided by Christie. Artist Tamiko Thiel connected iPads to Christie projectors to show an augmented reality installation. Says Thiel, “For quite a while I have wanted to combine live augmented reality with real-time large projections, so that the entire audience can see the world augmented through our smartphone app.”

“Digital Graffiti at Alys Beach represents a rare and captivating cultural experience. Christie has helped us refine this event further through their discipline in larger, more technical events and their deep expertise in the tools of the trade. Our residency artists reflect this in attaining results they had never imagined, and generating a greater sense of community,” says Brett Phares, curator, Digital Graffiti.

In The Netherlands, Eindhoven’s GLOW festival celebrates the city’s history as the City of Light with its annual festival. Started in 2006 with 45,000 visitors, it attracted over 750,000 visitors from around the world in 2018.

For eight days in November the Eindhoven city center is transformed into a celebration of light. For 2018, a projection mapping installation by Confluence that lit up the Catharinakerk, a neo-gothic church in the city center, used a total of 12 Christie HS Series laser projectors, provided by AV distributor Sahara Benelux. The original project – created by the Portuguese artists’ studio Ocubo – is inspired by the confluence of rivers and streams in Holland. The kinetic art also saw virtual dancers guide the viewer through the film, with flourishes of color emphasizing the church’s stunning architecture in an array of eye-catching geometric combinations.

Vivid Sydney is another event to which tourists and artists flock annually. It brings together light artists, music makers and brilliant minds, celebrating Sydney as a creative hub of the Asia-Pacific with large-scale light installations and projections, free family events, cutting-edge music performances and thought-provoking ideas talks, workshops and conferences.

The festival has been instrumental in driving tourism to Sydney and stimulating the city’s visitor economy in winter, traditionally a quieter period. In 2019, Vivid Sydney attracted over 2 million in attendance and contributed millions of dollars to the New South Wales economy.

During Vivid Sydney 2018, Wulugul Walk in Sydney’s Barangaroo precinct was transformed into a magical bushland, brought to life with dramatic lighting and mesmerizing puppetry. Known as The Liminal Hour, the multimedia experience was designed by the artists at Mandylights, Erth Visual & Physical Inc., Jacob Nash and James Brown. The show featured a walking, 20-foot high, illuminated puppet named Marri Dyin – which means “Great Woman” in the Eora language.

“The Liminal Hour is quite unique for Vivid Sydney as it’s more than just an installation piece that can be viewed, it’s also an experience to be a part of,” said Clint Dulieu, Technical Designer, Mandylights. “The precinct combines both the Marri Dyin puppet wandering the site and individual intimate moments between the puppet and spectators alike. In addition, we have several moments which incorporate the precinct’s tower lighting and audio features with integrated elements within the puppet to create a large-format spectacle.”

The project was commissioned by the Barangaroo Delivery Authority to showcase a unique creative program to share the stories of the Barangaroo precinct and celebrate the femininity of the site’s namesake. Mandylights was responsible for the lighting design of Marri Dyin, including 350 internal LED lights that were wirelessly controlled and triggered from both an onsite iPad and an external lighting control system.

The backdrop for the show included 48 custom-made moving lights atop themed truss towers that dramatically illuminated the site in a series of stunning sequences. The company also supplied audio design, show control and a unique control shipping container fully outfitted for onsite control. Among the technologies used for the show delivery was Christie Pandoras Box Widget Designer, an interactive application builder that provides an advanced control surface creation framework for customized show control.

Praising the teams for a job well done, a Vivid Sydney official spoke of The Liminal Hour as “the natural and collaborative way everybody came together to create this contemporary spirit,” noting that the gigantic Marri Dyin puppet aptly embodied the physicality and the philosophy of the land she inhabits.

While festivals such as Digital Graffiti, GLOW and Vivid Sydney are dedicated to celebrating and promoting digital art and projection mapping, other festivals around the world are embracing projection as a method of enhancing the audience experience.

Take the annual Bregenz Festival, which occurs in July and August in Bregenz, Austria on what is billed as the largest lake stage in the world. The “Opera on the Lake” has been attracting aficionados of culture and opera to Bregenz in the summer months since 1946.

Pioneering opera productions with breathtaking stage designs and innovative use of state-of-the-art technologies have made the Bregenz Festival known far beyond the national borders over the years. For a premiere of Georges Bizet’s “Carmen,” produced by Kaspar Holten, former Director of Opera at the Royal Opera House in London, two colossal female arms rise from the water and throw a set of playing cards into the air.

Each one of the cards, measuring around 4×7 meters, acts as an individual projection screen. In addition, the images had to remain clear even over the huge 60-meter distance between the lighting tower and the lake stage. This called for 30,000 ANSI lumens delivered by the Christie Boxer 4K30.

Projection mapping and digital art offer the chance to fill massive canvases in ways that create truly unique experiences that can entice spectators out of their homes to be entertained. And when considering tourism and urban renewal, projection mapping as a public work of art makes a statement.

One of the largest permanent projection mapping displays in the world is on Chicago’s theMART. In a city known for its public works of art – from Cloud Gate (aka “The Bean”) to Chicago Picasso – creating a memorable installation that would also contribute to the ongoing revitalization of the Chicago Riverwalk called for something bold.

The owners of theMART, Vornado Realty Trust, approached Obscura Digital, known for creating one-of-a-kind immersive experiences, to create a projection mapping display onto what was once the largest building in the world with 4 million square feet of floor space and its own zip code. Titled “Art on theMART,” Obscura used 34 Christie 4K projectors to beam over 1 million lumens onto the 2.5-acre south façade of the iconic building. The show runs five nights a week, with a 30-year commitment from the city. Local and international works are on display and freely accessible as public art with no branding.

The Obscura team created a digital 3D model of the building from a laser scan to account for the architectural features of theMART and to determine the projector configuration. Obscura also developed a content management solution to provide show control, and to allow theMART curatorial team to easily upload and render the projection mapping content. This included masking the windows with special software so the projectors wouldn’t shine light into the building interior.

“TheMART and Vornado Realty Trust are thrilled with the success of the inauguration of Art on TheMART, a gift to the people of Chicago, who widely embraced this monumental new platform for public art,” said Art on theMART Executive Director Cynthia Noble. “We are proud of the works by the initial risk-taking artists—Diana Thater, Zheng Chongbin, Jason Salavon and Jan Tichy—and look forward to welcoming a range of perspectives over the next 30 years.”

Connecting with audiences is no easy feat. Competition for people’s time and attention is fierce and creating a spectacle that draws audiences and commands attention is a formidable creative challenge. Projection mapping creates compelling visuals that help to immerse audiences, tell stories, and create amazing shared experiences. With technology that has become more intuitive, easier and less time consuming to use, projection mapping and large-scale digital art have become more accessible. Transforming any surface of almost any size is now just limited by the imagination. • • •

Joe Kleimanhttp://wwww.themedreality.com
Raised in San Diego on theme parks, zoos, and IMAX films, InPark's Senior Correspondent Joe Kleiman would expand his childhood loves into two decades as a projectionist and theater director within the giant screen industry. In addition to his work in commercial and museum operations, Joe has volunteered his time to animal husbandry at leading facilities in California and Texas and has played a leading management role for a number of performing arts companies. Joe previously served as News Editor and has remained a contributing author to InPark Magazine since 2011. HIs writing has also appeared in Sound & Communications, LF Examiner, Jim Hill Media, The Planetarian, Behind the Thrills, and MiceChat His blog, ThemedReality.com takes an unconventional look at the attractions industry. Follow on twitter @ThemesRenewed Joe lives in Sacramento, California with his wife, dog, and a ghost.
Share
Facebook
Twitter
Linkedin
Email
Print
WhatsApp
Pinterest
ReddIt
Tumblr
Previous articleISE 2020
Next articleSmart Monkeys: Getting to know ISAAC