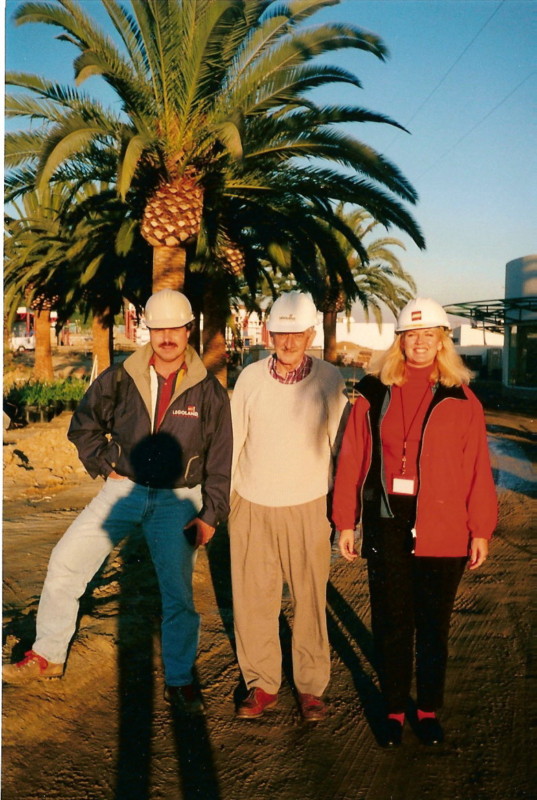 For starters, tell me about your role/past in the themed entertainment industry and why you wanted to serve at TEA President??

I spent the first half of my career working on the entertainment and operations side of theme parks and attractions. People who work in entertainment in theme parks always get to do creative things beyond just the live shows they produce – for me it started with special events, cultural programming, laser/fireworks spectaculars, concert production and capital projects. But the real crossover began when I was hired as part of the team to build and run LEGOLAND Windsor – the first LEGO Park to be built outside of Denmark.

Officially I was the Operations Director, developing the plans, procedures and the team to run the park. I was also responsible for creating all live shows, all event programming and I participated in design development for everything – all rides and attractions as well as more mundane things like the front gate, back of house areas, offices, etc. This experience immersed me in the creative process. It also introduced me to the power of a brand.

After 3 years in Windsor, I joined the team for LEGOLAND California just as work on that park was entering the detail design phase. I was once again the Director of Operations but reprised my role on the project team and participated in the design development for attractions and facilities and lead creative for shows and special events. During my time with LEGO, we worked with lots of TEA member companies and I started learning more by attending the TEA party every year at IAAPA. When I had an opportunity to move back home to Toronto and work for a creative design and project management company – BaAM – it seemed like a very logical career progression. It also made sense for us to join TEA. That was 2001.

I knew that in order to get the most out of the TEA, we would need to get involved. The President at the time was Pat Gallegos, who I had worked with on LEGOLAND California. Pat encouraged me to run for the Eastern board. A few years later, I became President of the Eastern division (the first non-Orlando based President of the Eastern division). I really liked what I saw happening with TEA in Europe where events seemed to be connected to celebrating openings of member projects and milestones. We decided to offer events for members that were more regional – in Toronto, New York, St. Louis, Branson – and in Orlando as well. When I had served the maximum term on the Eastern Board, it seemed a natural progression to move to the International Board. I am in my second term on this board and was first approached a few years back to consider running for the role of President. In order to take on such a responsibility, many things need to be aligned – most importantly the support of my company to back me during my term. I am fortunate that in 2012 that was possible.

Coming off the 20th anniversary of TEA, what do you think has made the organization stand up to the test of time?

I think the reason is the simple fact that our members are a very adaptable group. As the lines have blurred between different types of experiences, the skill sets of those who create those experiences have become transferable. Our industry is constantly defining and re-defining itself. Our members are now working on different types of projects than they thought would be their primary focus when they first formed their companies or when the TEA was first conceived more than 20 years ago. We are a very adaptable group and our association is also adaptable as a result

How do you think TEA will be successful moving forward?

We need to find new ways to be relevant to our members. For example, we can connect members with owners to demonstrate the value we can provide for their projects regardless of the scale. Our members provide creative value, and our knowledge of how to make creative ideas come to life – on time and on budget and within the constraints that every project has – is valuable to many industries. The TEA started as a group that came together to present a collective voice. I think we’ve been heard, recognized for what we represent. I think we now need to be more specific in identifying and promoting the skills and values we bring to a project – make it more tangible.

How will TEA be advancing Next Generation and educational outreach initiatives in the coming years?

The NextGen focus provides us with two important opportunities. The first is exactly what the name of the initiative implies – we are actively connecting with the next generation of young professionals to work in this industry. Some of them have more specific skills than we did – look at SCAD’s Themed Entertainment Design courses – they grew up in theme parks and museums and science centers so have more industry awareness than many of us did. They represent the future of our industry because I predict we will see a major changing of the guard in the next 10-20 years.

Connecting TEA with academic institutions can also help us validate and better organize the educational programs we offer to our members. We have two mature programs – SATE and the Summit – that have stood the test of time and evolved into must-attend events for many in our industry. If we want to take these to the next level and open them up to new audiences we need to use the expertise and resources our relationships with academic institutions can provide us to help further refine the programs, look at them differently and ultimately create better content and products from the conferences

What parts of the world do you feel TEA needs to focus on to grow?

We are a global organization; we need to keep pace with the areas of the world where our members are working. Ideally, we would be in a position to be ahead of the curve so that we can lay foundations for members or support local companies to work to a consistent standard. Expectations and standards vary throughout the world, but if we can influence this, we will be helping our members. Right now Asia is a focus.

We have a committee, chaired by Jeff Mayer, focused on just this initiative. Jeff and his committee members organized the very successful TEA Asia Summit that took place in Shanghai in October of 2012. We continue to work with IAAPA to ensure we have a presence at their Asia show. The 2013 show in Singapore will be the 3rd time we have had a presence at the show and hosted a mixer. As soon as we have the critical mass and will, we will start a division in this region.

What are some of the challenging issues facing the themed entertainment industry right now, and how is TEA addressing them?

Globalization is a challenge and an opportunity. We can help our members – particularly our smaller member companies – successfully move into new markets by creating opportunities for them to learn from larger companies and those who are already working in the new regions. The TEA Asia Summit that took place in Shanghai in October of 2012 was a first giant step in this area and started a dialogue. Working in new cultures and respecting and embracing the diversity this brings to project teams and project content is also a challenge. The SATE 2012 Conference in September held at Disneyland Paris used Cultural Diversity as its theme and explored the idea from a number of perspectives. Finally, communication is also a challenge. We are working hard to implement the right tools for an organization such as ours to effectively communicate with our members around the world.

How do you think TEA members can make the most out of their membership?

They shouldn’t wait for us to come to them – they should reach out and get involved. Attend events, and educational sessions. Contact their division president and host an event in their area. They should volunteer to become involved and give back to the industry. They should think about shaping the future of the themed entertainment industry by working with young people who are eager to learn more and find jobs in the industry. They should get to know other member companies in order to establish benchmarks for themselves and stay on top of what is going on in the industry.

As president, what are your goals for TEA?

As part of the transition the association will make when we hire a new leader to replace our retiring Executive Director, Gene Jeffers, I would like to see us think about what we do in a more service-oriented and business-like way. This will be an important shift in thinking – more focus on the content and value we can create out of everything we do. Many of the people I talk to value the creative energy and thinking we bring to the worlds we work in – perhaps we need to value it more as well. • • •

Judith Rubin
Judith Rubin ([email protected]) is a leading journalist, publicist, strategist, blogger, content marketing specialist and connector in the international attractions industry. She excels at writing about all aspects of design and technical design, production and project management. Areas of special interest include AV integration and show control, lighting design and acoustics, specialty cinema, digital video and world’s fairs. Judith has ties to numerous industry organizations. From 2005-2020 she ran communications, publications and social media for the Themed Entertainment Association (TEA). In 2013, she was honored with the TEA Service Award. She was development director of IMERSA, and co-chair of the 2014 IMERSA Summit. She was publicist for the Large Format Cinema Association in the 1990s, now part of the Giant Screen Cinema Association (GSCA) and has also contributed to the publications of PLASA, IAAPA and the International Planetarium Society. Already making her mark as a magazine and book editor, Judith joined World’s Fair magazine in 1987, which introduced her to the attractions industry. Launching as a freelancer in the mid 1990s she has contributed to dozens of publications and media outlets including Funworld, Lighting&Sound America, Sound & Communications, Urban Land, The Raconteur and The Planetarian. She joined InPark in 2010. Judith earned a Bachelor of Fine Arts from Pratt Institute. She has lived in New York City and the San Francisco Bay Area, and now makes her home in Saint Louis, where she is active in the local arts and theater community.
Share
Facebook
Twitter
Linkedin
Email
Print
WhatsApp
Pinterest
ReddIt
Tumblr
Previous articleLeadership & Hospitality connect
Next articleinfinite diversity: Jeremy Railton and EDC