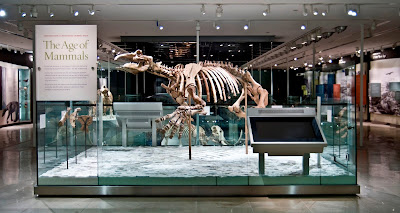 LOS ANGELES, 3 August 2010 – Cinnabar Inc. helped realize the creative vision for the new, permanent, 7,700 sq ft Age of Mammals exhibition and rotating displays in the Haaga Family Rotunda Galleries that opened July 11 as part of the ongoing “NHM Next” $91 million, 82,000 square foot transformation of the Natural History Museum of Los Angeles County. Brought onto the creative team by Simon Adlam (NHM director of exhibit production) just 10 months out to collaborate in redesigning the exhibit systems, in addition to fabricating and producing them, Cinnabar implemented a “design/build” methodology to make the most of available time and resources, bringing the project in ahead of schedule. NHM’s Adlam brought together and led the team that included Cinnabar, graphic design firm KBDA, NHM curators, NHM research scientists and museum staff.

Billed by NHM as “an exhibition “65 million years in the making,” Age of Mammals exemplifies the institution’s new way of presenting its collections and research in the context of big-picture issues such as climate change and evolution. The exhibition presents a total of 240 specimens, including 38 articulated mammal skeletons to illustrate NHM’s theme “Continents move. Climates change. Mammals evolve.” The Rotunda displays were created to house rotating exhibits from NHM’s 35 million object collection, beginning with the current What On Earth? as well as the display of Charles Knight paintings located on the second level.

Engineering, scheduling and creative challenges met
The exhibit systems that Cinnabar provided include custom specimen cases, modular information rails and exhibit platforms integrated with large specimen mounts, kiosks (audiovisual systems provided by others) and mechanical interactives. For the Rotunda, Cinnabar built the interior portion of the exhibit cases including decorative display systems with graphics and custom specimen mounts (produced by ELY, Inc.) All are designed along clean, simple lines that complement the interior of the 1913 Beaux Arts building.

Part of the process for Cinnabar was helping to design and implement an exhibition system that would, from a structural engineering standpoint, facilitate these large, heavy displays in a 1913 era building, and satisfy current seismic and safety codes. To spare the floor and distribute the weight the exhibit structures are supported from steel studs welded to the main beams, floating the structures about one inch above the floor. Cinnabar also devised a system to anchor glazing to the front of the displays rather than rest it on the floor.

Cinnabar CEO Jonathan Katz credits the design/build approach and Adlam’s leadership for the success of the project. “NHM’s new exhibitions are an outstanding example of what this collaborative approach can achieve,” says Katz. “Design/build is the new warp-speed project production model of the 21st century, and NHM’s new exhibitions are an excellent example of what can be accomplished – how a team can work on an accelerated schedule to fulfill the vision without compromising quality. Concerns are addressed and resolved jointly and quickly, from structural engineering to the choice of colors and finishes. Creative problem solving, teamwork and leadership are key, and the cost savings are truly significant.”

About Cinnabar
Cinnabar Inc. is a company of designers, artisan builders and producers creating unique experiences for the museum, entertainment and cultural industries. Founded in 1982, Cinnabar California, Inc. is one of the entertainment industry’s leading production and fabrication companies, providing specialty fabrication for television, film and themed venues. In recent years, Cinnabar has been at the forefront of developments that have seen the integration of innovative new approaches to the process and production of museum exhibitions.

Judith Rubin
Judith Rubin ([email protected]) is a leading journalist, publicist, strategist, blogger, content marketing specialist and connector in the international attractions industry. She excels at writing about all aspects of design and technical design, production and project management. Areas of special interest include AV integration and show control, lighting design and acoustics, specialty cinema, digital video and world’s fairs. Judith has ties to numerous industry organizations. From 2005-2020 she ran communications, publications and social media for the Themed Entertainment Association (TEA). In 2013, she was honored with the TEA Service Award. She was development director of IMERSA, and co-chair of the 2014 IMERSA Summit. She was publicist for the Large Format Cinema Association in the 1990s, now part of the Giant Screen Cinema Association (GSCA) and has also contributed to the publications of PLASA, IAAPA and the International Planetarium Society. Already making her mark as a magazine and book editor, Judith joined World’s Fair magazine in 1987, which introduced her to the attractions industry. Launching as a freelancer in the mid 1990s she has contributed to dozens of publications and media outlets including Funworld, Lighting&Sound America, Sound & Communications, Urban Land, The Raconteur and The Planetarian. She joined InPark in 2010. Judith earned a Bachelor of Fine Arts from Pratt Institute. She has lived in New York City and the San Francisco Bay Area, and now makes her home in Saint Louis, where she is active in the local arts and theater community.
Share
Facebook
Twitter
Linkedin
Email
Print
WhatsApp
Pinterest
ReddIt
Tumblr
Previous articleIAAPA Attractions Expo Goes to Orlando 2010-2019
Next articleContent & Communications World conference 13-14 Oct in New York