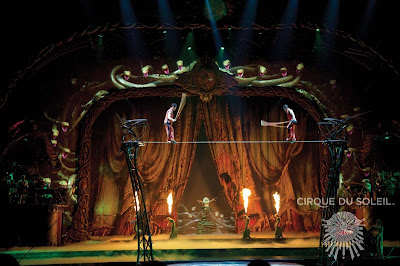 Set in a world where physical ability meets with the extraordinary of Cirque du Soleil, Zarkana, whichTIME magazine proclaimed “the show of the summer” in New York City and The New York Times called “aah-inspiring,” has been seen by more than 1.2 million people during its triumphant 2011-2012 international run.

“Zarkana is a production of the perfect size and scope for the beautiful theater at ARIA. With a high level of acrobatic performance, the show has garnered public appeal around the world. We are pleased that visitors to Las Vegas will be able to experience the show and feel that Zarkana is a perfect complement to the portfolio of Cirque du Soleil shows on The Strip,” says Cirque du Soleil President and CEO Daniel Lamarre.

Bill McBeath, President and COO of ARIA Resort & Casino, said, “We look forward to welcoming the cast and crew of Zarkana later this year. We’re certain they will love their new home and we’re equally certain that audiences from around the world will be wowed by this incredible production.”

Zarkana is a visually stunning modern acrobatic spectacular set in a world where physical ability meets with the extraordinary. Follow Zark in a quest to regain his powers – and the love of his life – in an abandoned theatre populated by a motley collection of off-the-wall characters and incomparable acrobats.  The diverse cast of more than 75 international artists transports the audience into a fantastical and suspenseful world, blurring the boundaries between the real and imaginary.

About Cirque du Soleil
Since 1984, the company has brought wonder and delight to more than 100 million spectators in over 40 countries in more than 300 cities on six continents. Cirque du Soleil has 5,000 employees, including more than 1,300 performing artists from close to 50 different countries. For more information, visit online at www.cirquedusoleil.com. Like us on Facebook or Tweet us: @Cirque.

Joe Kleimanhttp://wwww.themedreality.com
Raised in San Diego on theme parks, zoos, and IMAX films, InPark's Senior Correspondent Joe Kleiman would expand his childhood loves into two decades as a projectionist and theater director within the giant screen industry. In addition to his work in commercial and museum operations, Joe has volunteered his time to animal husbandry at leading facilities in California and Texas and has played a leading management role for a number of performing arts companies. Joe previously served as News Editor and has remained a contributing author to InPark Magazine since 2011. HIs writing has also appeared in Sound & Communications, LF Examiner, Jim Hill Media, The Planetarian, Behind the Thrills, and MiceChat His blog, ThemedReality.com takes an unconventional look at the attractions industry. Follow on twitter @ThemesRenewed Joe lives in Sacramento, California with his wife, dog, and a ghost.
Share
Facebook
Twitter
Linkedin
Email
Print
WhatsApp
Pinterest
ReddIt
Tumblr
Previous articleAmerican Public Gardens Association Annual Conference Taking Place in Columbus, OH
Next articleMediaMation’s 5th turnkey 4D install for a Legoland Discovery Center (Merlin Entertainments)