by Joe Kleiman, IPM Online News Editor
Orlando, FL, USA (January 2, 2012) — One of Universal Studios Florida’s original attractions, “Jaws: The Ride,” will be making its final voyages this evening.  The attraction, in which park guests take a boat cruise through the fictional town of Amity, encountering the deadly shark that “inspired” the films, opened on June 7, 1990, only to be shut down two months later due to “technical issues.”  It reopened in Spring 1993 with new props and an altered storyline by Universal Creative and Totally Fun Company (replacing Ride and Show Engineering, which had worked on the original version of the attraction).

Universal announced on December 2, 2011 that “Jaws” would close to make room for “an exciting new attraction.”  To date, no replacement has been announced and the “Jaws” attractions at Universal Studios Hollywood in Universal City, CA and Universal Studios Japan in Osaka continue to operate with no notification of closure.  Universal’s announcement was designed to allow fans a full month to enjoy the ride one final time. 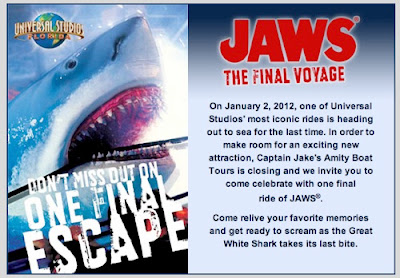 On December 17, with just two weeks left of operation, Seth Kubersky, author of “Universal Orlando 2011: The Ultimate Guide to the Ultimate Theme Park Adventure” (available from Intrepid Traveler), filmed a ridethrough of “Jaws” on a boat populated with one unique group of fans – in this case, former “skippers” from the attraction itself.  It is presented here with his permission.

InPark Magazine will report on the attraction replacing “Jaws” once it’s officially announced.

Joe Kleimanhttp://wwww.themedreality.com
Raised in San Diego on theme parks, zoos, and IMAX films, InPark's Senior Correspondent Joe Kleiman would expand his childhood loves into two decades as a projectionist and theater director within the giant screen industry. In addition to his work in commercial and museum operations, Joe has volunteered his time to animal husbandry at leading facilities in California and Texas and has played a leading management role for a number of performing arts companies. Joe previously served as News Editor and has remained a contributing author to InPark Magazine since 2011. HIs writing has also appeared in Sound & Communications, LF Examiner, Jim Hill Media, The Planetarian, Behind the Thrills, and MiceChat His blog, ThemedReality.com takes an unconventional look at the attractions industry. Follow on twitter @ThemesRenewed Joe lives in Sacramento, California with his wife, dog, and a ghost.
Share
Facebook
Twitter
Linkedin
Email
Print
WhatsApp
Pinterest
ReddIt
Tumblr
Previous articleDisney’s US Magic Kingdoms to Remain Open 24 Hours for "One More Disney Day"
Next articleMarch Opening Planned For "Nemesis: Sub-Terra" Dark Ride at Alton Towers