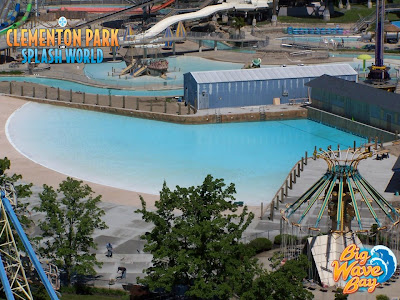 Clementon Park and Splash World was acquired in November 2011 by an investor group led by former Six Flags executives Kieran Burke and Gary Story. As promised by Burke and Story, crews have been diligently working to bring significant improvements to the Park in time for the 2012 season including the construction of the new Big Wave Bay.

“From the wave pool expansion to numerous improvements in the dry park, we are thrilled to be presenting to the community a broadly improved Clementon Park and Splash World,” said Burke. “The new Big Wave Bay is extraordinarily spectacular and its enormous capacity provides families with an exciting way to get wet and enjoy the Park without having to wait in any lines.”

Included in the overall improvements are new restrooms and changing facilities located near the new wave pool plus the expansion of two major food service locations to drastically increase speed of service. Plus, gigantic 20’ shade structures have been installed in the water park expansion area to provide comforting shade on those sunny summer days. And, for grown-ups only, the Park has added its first Tiki Bar, offering refreshing adult beverages and big screen television viewing.

“The five-year transformation of this iconic family entertainment jewel has been thrilling to watch,” said David Dorman, the Park’s General Manager since 2007. “But nothing matches the introduction of Big Wave Bay, which is by far the most breathtaking addition to this Park ever. If a family has not been here before, or not visited in a while, I am confident they will be impressed by all of the sweeping improvements.”

Clementon Park and Splash World, located in Clementon, NJ, is among the oldest operating parks in the country and has been operating since 1907. Founded by NJ Assemblyman Theodore Gibbs as a simple swimming operation on Clementon Lake, the property steadily grew by offering rides, attractions and a water park. Other recent additions include Laguna Kahuna, a five-story, one-acre Polynesian water play land; Ring of Fire, a thrilling 60-foot looping coaster; Thunder Drop featuring a 100-foot free fall; and Torpedo Rush, the world’s tallest dueling trap door speed slides. Today the park boasts 17 rides, a vibrant midway and 8 major water park attractions and hosts hundreds of group outings each season.

Joe Kleimanhttp://wwww.themedreality.com
Raised in San Diego on theme parks, zoos, and IMAX films, Joe Kleiman would expand his childhood loves into two decades as a projectionist and theater director within the giant screen industry. In addition to his work in commercial and museum operations, Joe has volunteered his time to animal husbandry at leading facilities in California and Texas and has played a leading management role for a number of performing arts companies. Joe has been News Editor and contributing author to InPark Magazine since 2011. HIs writing has also appeared in Sound & Communications, LF Examiner, Jim Hill Media, and MiceChat. His blog, ThemedReality.com takes an unconventional look at the attractions industry. Follow on twitter @ThemesRenewed Joe lives in Sacramento, California with his fiancé, two dogs, and a ghost.
Share
Facebook
Twitter
Linkedin
Email
Print
WhatsApp
Pinterest
ReddIt
Tumblr
Previous articleThe Producers Group Gold Level Sponsor of AAE, Asia’s Top Themed Entertainment Trade Event
Next articleCleopatra Turns California Science Center Gala Into Royal Event