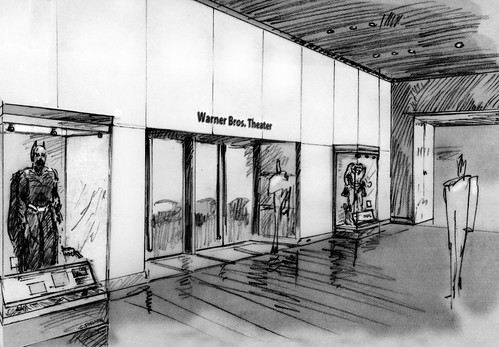 Washington, DC, USA — At a ceremony on February 1, 2012, marking the opening of the new Warner Bros. Theater at the National Museum of American History, the Smithsonian will present Clint Eastwood with the James Smithson Bicentennial Medal in honor of Eastwood’s contribution to the American experience through film. The medal recognizes Eastwood’s six decades of captivating national and international audiences through his work as an award-winning actor and director.

To accompany the opening of the new Warner Bros. Theater, a new display of objects will be on view showcasing the unique brand of Hollywood storytelling and accessibility that has helped to define American culture to global audiences. The inaugural display includes costumes worn by Humphrey Bogart, Lauren Bacall, Ingrid Bergman and Eastwood along with Harry Potter’s robe. Visitors will also see objects representing Warner Bros. studio history such as Jack Warner’s silver telephone and Bugs Bunny animation drawings.

Thanks to a $5 million donation from Warner Bros. Entertainment, the existing 46-year-old 270-seat Carmichael Auditorium has been transformed into a film theater with the installation of new technology, including digital 3-D projection. The theater will also has equipment to showcase films still in their original 35-mm reel format. The Warner Bros. Theater will be used for lectures, symposia, concerts and other programs and events as well.

In recognition of the gift, the Smithsonian renamed Carmichael Auditorium the Warner Bros. Theater. Leonard Carmichael, the seventh Secretary of the Smithsonian, will be recognized with a plaque in the theater’s lobby and in a small display about the history of the museum. The display case is located at the National Mall entrance and will highlight the role of Carmichael and Frank Taylor—founding director of the museum.

“For more than a century, American movies have provided a strong and enduring national cultural connection that crosses generations,” said Brent D. Glass, director of the museum. “It continues to shape how we perceive ourselves and how people around the world understand our country. American film deserves a special home at our museum and the Warner Bros. partnership expands our capacity to tell this unique story and allow museum visitors to explore the legacy of American cinema.”

“Warner Bros. has a rich legacy of entertaining audiences for almost 90 years and truly realizes the importance and value of that history,” said Barry M. Meyer, chairman and CEO of Warner Bros. “This partnership with the Smithsonian, whose very name is the gold standard for the preservation and presentation of all things with historical significance, is a great step reminding people that movies and television shows are an important part of our shared culture. The Warner Bros. Theater will be a state-of-the-art venue for highlighting filmed entertainment and programs that are important to people.”

The story of film in the United States follows an industry that began as novelty entertainment and grew to be a global enterprise.

The Warner Bros. gift complements the museum’s existing entertainment and photo-history collections that include costumes, props and scripts from film and television as well as cameras, projectors and editing equipment. The museum’s collections include an 1890s motion-picture rotary lens; props from 1920s silent films; drawings from the first Mickey Mouse animated film, Steamboat Willie, made in 1928; one of the Technicolor motion-picture cameras used in 1939 to film The Wizard of Oz; and the ruby slippers Judy Garland wore in that movie.

When the theater opens, audiences will be able to experience how these objects were actually used in performance, and curators will provide commentary on the objects and films to further communicate their historical and cultural legacy.

Film series already scheduled for the Warner Bros. Theater include:

This festival begins on February 3 with a tribute to Humphrey Bogart and a screening of “Casablanca,” which is celebrating its 70th anniversary. The film will be introduced by Stephen Bogart, the son of Bogart and Lauren Bacall. The Feb. 3 screening will be a special event ticketed through the Smithsonian Associates. Additional films that weekend include “The Maltese Falcon,” “The Treasure of the Sierra Madre” and “The Big Sleep.” There will be an accompanying display highlighting costumes and artifacts related to these classic films and the history of Warner Bros.

This series, running from June 22 to June 24, will highlight several major Eastwood films, including Academy Award®-winning “Unforgiven,” “Pale Rider,” “The Outlaw Josey Wales” and the documentary, “The Eastwood Factor.”

The birth of motion picture sound will be the focus of the third festival, to be held July 13 to 15, with “Singin’ In The Rain” (celebrating its 60th anniversary), “The Jazz Singer,” “The Broadway Melody” and “Don Juan.”

To mark the 150th anniversary of the start of the American Civil War, the final series of 2012 will open on October 19 with “Gone With The Wind,” followed by “Glory,” “Gettysburg” and “Gods & Generals.” Series continues through October 21.

Most screenings are free of charge to the public.

The Warner Bros. gift also will enable the museum to establish a reserve fund that will provide for maintenance and general upgrades to the theater.

Warner Bros. Entertainment, a subsidiary of TimeWarner, creates, produces and distributes films, television programs, animated features, comic books and other creative content. Warner Bros. is based in Burbank, Calif. This donation marks the entertainment division’s first major gift to the Smithsonian. The National Museum of American History collects, preserves and displays American heritage in the areas of social, political, cultural, scientific and military history. To learn more about the museum, check http://americanhistory.si.edu.

Joe Kleimanhttp://wwww.themedreality.com
Raised in San Diego on theme parks, zoos, and IMAX films, Joe Kleiman would expand his childhood loves into two decades as a projectionist and theater director within the giant screen industry. In addition to his work in commercial and museum operations, Joe has volunteered his time to animal husbandry at leading facilities in California and Texas and has played a leading management role for a number of performing arts companies. Joe has been News Editor and contributing author to InPark Magazine since 2011. HIs writing has also appeared in Sound & Communications, LF Examiner, Jim Hill Media, and MiceChat. His blog, ThemedReality.com takes an unconventional look at the attractions industry. Follow on twitter @ThemesRenewed Joe lives in Sacramento, California with his fiancé, two dogs, and a ghost.
Share
Facebook
Twitter
Linkedin
Email
Print
WhatsApp
Pinterest
ReddIt
Tumblr
Previous articleTREND: Fountain Shows
Next articleChina 2020