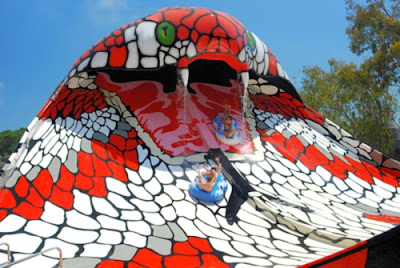 Complete with bold orange, black and yellow scales to resemble a massive cobra on both the interior and exterior, this slide tower will be the first of its kind anywhere in the United States. King Cobra’s unique configuration enables two tubes to race through a circular path with twists, turns and surprises through enclosed and open sections of the slide at speeds up to 32 miles per hour. The ride’s finale features a 25-foot plunge at a 50-degree angle with riders racing until the heart-pounding finish as they appear to be swallowed by the massive mouth of the cobra.

King Cobra is manufactured by Polin, a waterpark manufacturer responsible for the installation of fixtures in water parks in 80 countries around the globe. King Cobra marks Polin’s first major U.S. installation in the company’s 35-year history.

“We are thrilled to work with Polin on this landmark project, and are confident that King Cobra’s intense ride experience and unparalleled design will make it our most popular and entertaining attraction,” said Park President John Fitzgerald.

King Cobra is scheduled to open this summer in lieu of the Dive Bomber drop capsule. For more information, visit www.sixflags.com/greatadventure.

Joe Kleimanhttp://wwww.themedreality.com
Raised in San Diego on theme parks, zoos, and IMAX films, Joe Kleiman would expand his childhood loves into two decades as a projectionist and theater director within the giant screen industry. In addition to his work in commercial and museum operations, Joe has volunteered his time to animal husbandry at leading facilities in California and Texas and has played a leading management role for a number of performing arts companies. Joe has been News Editor and contributing author to InPark Magazine since 2011. HIs writing has also appeared in Sound & Communications, LF Examiner, Jim Hill Media, and MiceChat. His blog, ThemedReality.com takes an unconventional look at the attractions industry. Follow on twitter @ThemesRenewed Joe lives in Sacramento, California with his fiancé, two dogs, and a ghost.
Share
Facebook
Twitter
Linkedin
Email
Print
WhatsApp
Pinterest
ReddIt
Tumblr
Previous articleWorld’s Biggest Motion Picture Screen Replaced at Sydney IMAX
Next articleLondon’s Natural History Museum Chooses Octoshape For HD Video Streaming