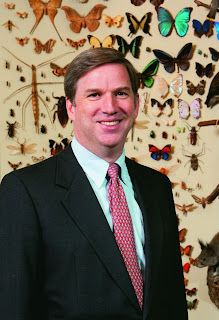 Washington, DC, USA — Cristián Samper, a biologist and international leader in the field of conservation biology, announced his resignation from the National Museum of Natural History where he has served as director since 2003. Samper was Acting Secretary of the Smithsonian from March 2007 until July 2008, when he returned to the Museum of Natural History. Samper will continue as director through July.

Samper is leaving the Smithsonian to become president and CEO of the Wildlife Conservation Society headquartered in New York City.

“It has been a privilege to serve at the Smithsonian as director of this great museum, with a team of dedicated professionals and act as a steward of the largest natural history collection in the world,” said Samper. “As a tropical biologist, I recognize the urgent need to conserve the natural and cultural diversity of this planet. It is my goal to contribute to these vital efforts as head of the Wildlife Conservation Society.”

Samper took over as Acting Secretary of the Smithsonian at the request of the Board of Regents when then-Secretary Lawrence Small announced his resignation March 27, 2007. Samper immediately stepped into the position, taking a leave from the directorship of Natural History. In the 15 months he served as Acting Secretary, Samper oversaw a number of governance reforms at the Institution; he reinstated scholarship as the highest priority following several years of emphasis on funding for infrastructure and needed building repairs and maintenance, established a task force to examine the relationship of the business operation—now Smithsonian Enterprises—to the Institution and represented the Smithsonian at several congressional hearings. He also started planning for the first Smithsonian wide capital campaign.

“Cristián is an outstanding leader who leaves a major legacy,” said Smithsonian Secretary Wayne Clough. “During his tenure significant portions of the museum were renovated to make way for innovative new permanent exhibitions, and he brought a renewed commitment to research and scholarship. The beneficiaries are the millions of people who visit the museum each year.”

At the National Museum of Natural History, Samper was responsible for the direction and strategic planning of the museum, covering work in the areas of biology, geology, paleontology and anthropology. He oversaw an annual federal budget of $68 million in federal funds in FY 2012 and supervised more than 460 employees. The museum houses 126 million specimens and artifacts—the largest collection at the Smithsonian, and hosts an average of 7 million visitors a year. Its scientists publish about 500 scientific research contributions a year. Samper’s accomplishments include:

“It has been an immense pleasure to work with Cristián as both director of the National Museum of Natural History and Acting Secretary of the Smithsonian,” said Roger Sant, a Smithsonian Regent and Vice Chair of the museum’s Advisory Board. “He is a transformational leader who has been as comfortable dealing with big ideas as he has with the day-to-day details of the Institution. All of us are grateful to Cristián for a decade of extraordinary service.”

Before coming to Washington, Samper was deputy director and staff scientist at the Smithsonian Tropical Research Institute in Panama from 2001 to 2003. A native of Colombia, Samper served as director of the environment division of the Foundation for Higher Education in Colombia in the early 1990s and was the moving force behind establishing a network of private reserves in that country. Samper earned his master’s degree and doctorate in biology at Harvard University.

Samper will begin at the Wildlife Conservation Society Aug. 1. The Wildlife Conservation Society is dedicated to saving wildlife and wild places around the world. The 117-year-old organization runs the world’s largest system of urban wildlife parks, including the Bronx Zoo, New York Aquarium, Central Park Zoo, Prospect Park Zoo and the Queens Zoo. In addition, WCS oversees more than 500 conservation projects around the world. WCS is headquartered at the Bronx Zoo in New York City. Samper will follow president and CEO Steven Sanderson who retires from WCS in July.

Joe Kleimanhttp://wwww.themedreality.com
Raised in San Diego on theme parks, zoos, and IMAX films, InPark's Senior Correspondent Joe Kleiman would expand his childhood loves into two decades as a projectionist and theater director within the giant screen industry. In addition to his work in commercial and museum operations, Joe has volunteered his time to animal husbandry at leading facilities in California and Texas and has played a leading management role for a number of performing arts companies. Joe previously served as News Editor and has remained a contributing author to InPark Magazine since 2011. HIs writing has also appeared in Sound & Communications, LF Examiner, Jim Hill Media, The Planetarian, Behind the Thrills, and MiceChat His blog, ThemedReality.com takes an unconventional look at the attractions industry. Follow on twitter @ThemesRenewed Joe lives in Sacramento, California with his wife, dog, and a ghost.
Share
Facebook
Twitter
Linkedin
Email
Print
WhatsApp
Pinterest
ReddIt
Tumblr
Previous articleNew Loan From City Brings Montreal Planetarium Closer to Completion
Next articleTEA Announces Presenters for 2012 Thea Awards – industry celebs such as Pixar’s Pete Docter will be on hand