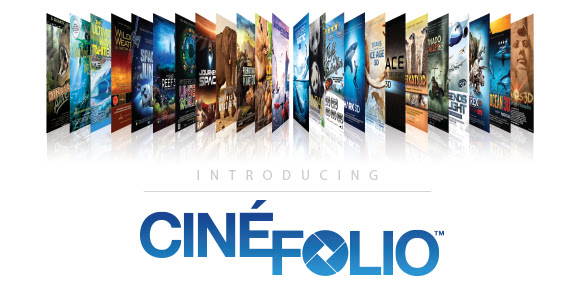 Evanston, IL, USA (Nov. 13 2014) – D3D Cinema is pleased to announce the introduction of Cinefolio – a turnkey digital cinema initiative aimed at bringing premiere immersive 3D cinema into museums, aquariums, zoos and other attractions.  Augmenting D3D’s momentum in the giant screen cinema arena, the Cinefolio program and product line are specifically targeted at smaller and medium size venues, designed to provide a bundled hardware and content portfolio to institutions for no upfront cost.

“We’re tremendously excited about the launch of Cinefolio,” said Don Kempf, founder and president of D3D Cinema.  “While fulldome and giant screen theaters have long immersed audiences at large-scale museums, barriers of entry – from high costs to extensive space requirements – have all too often been prohibitive.  New digital technology is now bringing the excitement of immersive cinema to museums, aquariums and zoos of all shapes and sizes.”

Cinefolio’s distribution partners are also excited by the program:

“We’re thrilled by D3D’s successes in their efforts to revitalize the business of the giant screen industry.  We think Cinefolio is poised to be another great new initiative for the museum cinema industry.” — Mark Katz, President of Distribution, National Geographic Studios

“Museums always benefit—both financially and non-financially—by showing films that are educational, enlightening and entertaining, and we are thrilled to be a part of this effort.” — Fiona Charlton, Commercial Director, BBC Earth and Film

“We fully endorse a program aimed at expanding the museum cinema market into mid-size and smaller cities and venues.  The promise of Cinefolio is its endeavor to introduce new theater partners into this collaborative business and, by extension, allow documentary films to reach a larger audience of schools and families.  This is important in delivering on our mission at SK and in enabling us to deliver on the trust placed in us as filmmakers by the committed organizations who have supported some of our most significant work, be it the National Science Foundation, the Smithsonian Institution, and others.” — Jonathan Barker, President of SK Films

“Pairing a relevant film curriculum with exhibitions has proven to be an enriching and lucrative venture no matter how large the museum.  Cinefolio is a streamlined vehicle built to enable museums of all stripes and budgets to enter this industry.” — Mark Kresser, President of K2 Communications

Joe Kleimanhttp://wwww.themedreality.com
Raised in San Diego on theme parks, zoos, and IMAX films, Joe Kleiman would expand his childhood loves into two decades as a projectionist and theater director within the giant screen industry. In addition to his work in commercial and museum operations, Joe has volunteered his time to animal husbandry at leading facilities in California and Texas and has played a leading management role for a number of performing arts companies. Joe has been News Editor and contributing author to InPark Magazine since 2011. HIs writing has also appeared in Sound & Communications, LF Examiner, Jim Hill Media, and MiceChat. His blog, ThemedReality.com takes an unconventional look at the attractions industry. Follow on twitter @ThemesRenewed Joe lives in Sacramento, California with his fiancé, two dogs, and a ghost.
Share
Facebook
Twitter
Linkedin
Email
Print
WhatsApp
Pinterest
ReddIt
Tumblr
Previous articleWeber Group’s Newest Projects Include Crayola Experience Orlando and Indianapolis Zoo Orangutan Center
Next articleSIGGRAPH 2015 Call for Submissions