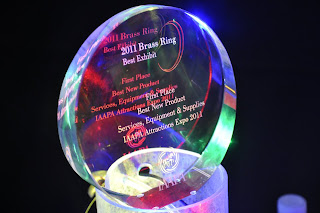 SANTA CLARITA, CA, USA — “This has been a year for introducing Darklight Precision Lighting System lighting products to concert and theatre markets, the museum and science center community and the themed entertainment industry while continuing to build our base in haunted attractions and special events,” says company founder Quan Gan. “We have spent a lot of time on the road, and been very pleased with the level of interest all around – and really blown away to receive IAAPA’s Brass Ring Award for Best New Product at the 2011 IAAPA Attractions Expo in Orlando.”
Darklight: Precision Lighting System is an up-and-coming provider of micro LED spotlights for exhibitions and special events. Darklight headquarters is in the Los Angeles area, with manufacturing in Shanghai. Founded by Quan Gan, his wife Charlie Xu, and colleague Jerry Dong from a successful start in the haunted attractions business, the company is now finding broader market acceptance for its products in the themed entertainment sector. November 2011 marked Darklight’s second year in business and second year as an exhibitor at the IAAPA Attractions Expo. 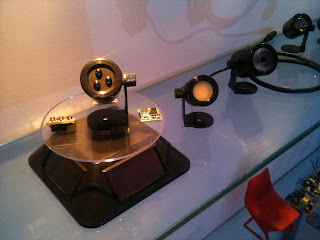 On the exhibit floor at IAAPA 2011, Darklight displayed its existing line of UL listed, ultra-compact and modular LED fixtures and introduced prototypes of two new fixtures that will start shipping in 2012: the Precision DMX and the Precision Alpha. The lights are literally pocket-sized, typically measuring about 1″ x 1″ x 2″. “We believe the Precision DMX is the world’s smallest DMX light with the intelligence fully built into the fixture,” says Gan. “It is one-tenth the size of fixtures that perform comparably, and unlike traditional AC models, it uses low-voltage power.” The Precision Alpha is an LED pinspot about the size of a finger and it accepts theatrical gels and diffusion filters. “It competes with much larger fixtures in terms of brightness, but since it never gets very hot, the gels don’t burn out, and because of its size you only need a gel about the size of a dime.” Not surprisingly, Darklight products are attracting the attention of museum exhibit designers for lighting display cases.

Recent customers of Darklight include the Playboy Mansion (the Halloween party), American Museum of Natural History, several major theme parks including Six Flags Great Adventure and Busch Gardens, and the Tampa Zoo. One of the company’s important early clients was the City Museum in Saint Louis. In conjunction with the Transworld Haunted Attractions Expo in March 2012, Darklight will host a special event at the City Museum in honor of the museum’s founder Bob Cassilly, who died recently in a construction accident.

It was while working in the Robotics Lab as an Electrical Engineering and Computer Science undergraduate at the University of California (Berkeley) that Gan learned to think small. “I got involved in working on a robotic spy-fly as part of an ongoing project where they are trying to develop robots that mimic the movements of natural creatures,” he explained. “I could go on for hours about robot insects. Did you know that we still can’t make something that maneuvers better than a cockroach? There is so much we don’t understand about nature.” Gan took an interest in product design as a graduate student in Mechanical Engineering at Stanford University, then went to China to work for Intel on a rotation program, where he met his wife and business partner, Charlie Xu, who was also employed with Intel. A native Shanghainese, Xu has a graduate degree in art and design from Tongji University. Their first business venture together was Shanghai Nightmare in October 2009, a Halloween haunted attraction that made international news because of its popularity. What originated as a moonlight project snowballed to the point that both Gan and Xu quit their corporate jobs to pursue an entrepreneurial career path between the US and China.

During the production of Shanghai Nightmare Gan felt that existing lighting fixtures for dark attractions did not meet the demands of the task at hand so he was inspired to create his own. In early 2010, he and his colleague Jerry Dong, CTO of Darklight invented their first three Precision lighting fixtures, which are mainstays of the current product line: the Precision X close range spotlight, Precision Y mid-range wash, and Precision Z high power spotlight – and Darklight was founded.

About the Brass Ring Awards
IAAPA is the International Association of Amusement Parks & Attractions and every November hosts the industry’s largest trade event. In November 2011, hundreds of finalists from amusement parks, waterparks, zoos, aquariums, museums, and family entertainment centers around the world packed the audience during the 2011 IAAPA Attractions Expo in Orlando to hear the newest Brass Ring Award winners announced. The top honors are given to companies and individuals for excellence in: marketing, live entertainment, human resources, retail, family entertainment centers, new product development, and trade show exhibits at IAAPA Attractions Expo. More than 600 entries were submitted for this year’s competition. The term ‘brass ring,’ a reference to the carousels of the late 1800s, is today synonymous with high achievement in the attractions industry.