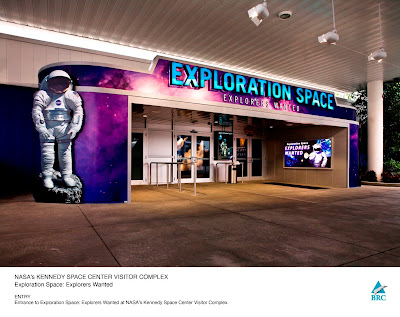 Linköping, Sweden, 19 May 2011: The first exhibit at NASA’s Kennedy Space Center Visitor Complex to examine the near future of space exploration, ‘Exploration Space:Explorers Wanted’ is a stunning addition to one of America’s most enthralling and best-loved visitor attractions. Combining live theatre, interactive exhibits and new media components, the area was designed by BRC Imagination Arts, Inc, in collaboration with the Kennedy Space Center Visitor Complex and Delaware North Co. Parks & Resorts, the Visitor Complex’s commercial partner.

The exhibit audio visual systems were designed and installed by Electrosonic. They include a giant 12ft x 8ft portal looking out onto a rear-projection screen that displays enormous images of future destinations like the moon, Mars and nebulas for the introductory exhibit, ‘Your Destination’. A flat-screen LCD display titled ‘On The Shoulders Of Giants’ showcases the next generation of spacecraft. Five large 12ft x 15ft trapezoidal exhibit screens immerse the guests in the future of space travel. Six more screens of various shapes and sizes, including a 14ft wide 16:9 screen a 12ft diameter screen and four trapezoidal screens, support the main show ‘Explorers Wanted’.

Twice every hour, the entire exhibit is transformed into a live immersive show environment for a 12-minute dynamic, presentation called ‘Explorers Wanted’, in which a NASA ‘Communicator’ walks guests through new missions, new discoveries and the immense challenges of space exploration.

“During the show, visitors sit on bench seats, surrounded by digital imagery, as the Communicator inspires the audience to become part of a NASA mission and the future of space exploration,” says Tom Brighton, Media Support Specialist, Electrosonic. “The main show is displayed on a series of fixed, geometrically shaped screens. The primary content is shown on a large 14ft wide center screen and a secondary 12ft diameter circular screen, stage right. Two additional projectors display content on four trapezoidal screens, which grow progressively larger in size as they arc over the top of the center screen.”

The exhibit and show are run by a Medialon Manager control system with content served by ten WATCHOUT players feeding nine projectors and one monitor. Electrosonic took advantage of WATCHOUT’s inherent programmability to ensure that seven of the projectors could display content onto the nine trapezoidal screens without images bleeding onto the wall. They also created a custom user interface for the WATCHOUT master PC controller so that staff can add updated content to the pre-programmed show to keep it fresh and relevant – a key customer requirement.

“The fact that all the screens are odd shapes and sizes makes the show very visually striking, but did present technical challenges,” Brighton reflects. “Fortunately WATCHOUT is not phased by such things and proved itself capable of performing pretty much any task we could throw at it.”

Fredrik Svahnberg, Marketing Manager, Dataton, concludes: “We love projects that push WATCHOUT to new limits and the ‘Explorers Wanted’ show at Exploration Space certainly does that. The result is an immersive audiovisual experience that educates as well as tells a thrilling story of potential, not just of the future of space exploration, but also of each individual visitor. We are extremely proud to have been able to help bring this project to fruition in such a technically and creatively satisfying way.”

About Dataton
Renowned Swedish show control developer and manufacturer Dataton has firmly established themselves on the international market since the 1980s. The company’s flagship products include the award-winning Dataton WATCHOUT multi-display production and presentation system as well as the intuitive Dataton PICKUP audio guide. Dataton is represented in most countries and their products are in use every day in commercial and cultural installations worldwide. Visit www.dataton.com.

Judith Rubin
Judith Rubin ([email protected]) is a leading journalist, publicist, strategist, blogger, content marketing specialist and connector in the international attractions industry. She excels at writing about all aspects of design and technical design, production and project management. Areas of special interest include AV integration and show control, lighting design and acoustics, specialty cinema, digital video and world’s fairs. Judith has ties to numerous industry organizations. From 2005-2020 she ran communications, publications and social media for the Themed Entertainment Association (TEA). In 2013, she was honored with the TEA Service Award. She was development director of IMERSA, and co-chair of the 2014 IMERSA Summit. She was publicist for the Large Format Cinema Association in the 1990s, now part of the Giant Screen Cinema Association (GSCA) and has also contributed to the publications of PLASA, IAAPA and the International Planetarium Society. Already making her mark as a magazine and book editor, Judith joined World’s Fair magazine in 1987, which introduced her to the attractions industry. Launching as a freelancer in the mid 1990s she has contributed to dozens of publications and media outlets including Funworld, Lighting&Sound America, Sound & Communications, Urban Land, The Raconteur and The Planetarian. She joined InPark in 2010. Judith earned a Bachelor of Fine Arts from Pratt Institute. She has lived in New York City and the San Francisco Bay Area, and now makes her home in Saint Louis, where she is active in the local arts and theater community.
Share
Facebook
Twitter
Linkedin
Email
Print
WhatsApp
Pinterest
ReddIt
Tumblr
Previous articlePhiladelphia: Liberty Bell Now Shines More Brightly Thanks To LED Lighting By MSi
Next articleSt. Louis’ Citygarden Chosen as 2011 Winner of ULI Amanda Burden Urban Open Space Award