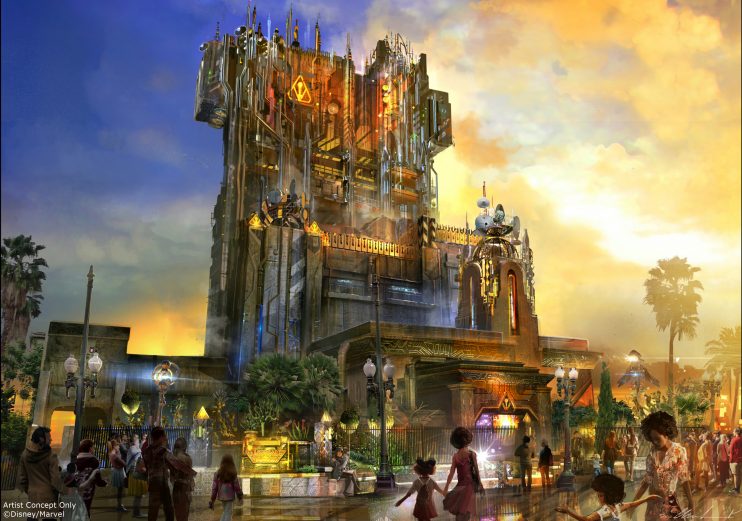 Summer 2017 will be adventurous, exciting and heroic at Disney California Adventure Park when guests encounter the thrilling Guardians of the Galaxy–Mission: BREAKOUT! and answer the call to join legendary Super Heroes in all-new experiences for Summer of Heroes, May 27 through Sept. 10.

Summer of Heroes inaugurates an ever-expanding universe of Super Hero stories at Disney California Adventure that will become even bigger over time. Guests in the park’s Hollywood Land will join some favorite Super Heroes for all-new, epic experiences for a limited time, and beginning May 27 they will encounter the intrigue and triumph of the new, year-round attraction, Guardians of the Galaxy–Mission: BREAKOUT!

“It’s going to be a thrilling summer at the Disneyland Resort,” said David Duffy, Director, Creative Entertainment. “You can celebrate the arrival of Guardians of the Galaxy–Mission BREAKOUT! and join forces with legendary Super Heroes. You can choose an awesome encounter with Star-Lord, Black Widow, Spider-Man, Hawkeye or Captain America, step up to meet Groot for the first time, and find out if you have what it takes to join the Avengers. It’s all part of the adventure with Summer of Heroes.”

Guardians of the Galaxy­–Mission: BREAKOUT! – This new adventure blasts guests straight into the “Guardians of the Galaxy” story for the first time, alongside characters from the blockbuster films and comics. As guests join Rocket in his attempt to bust his pals out of the Collector’s Fortress, they’ll experience randomized ride experiences complete with all-new visual and audio effects and music inspired by the popular film soundtracks.

Guardians of the Galaxy: Awesome Dance Off! — Star-Lord will fire up his old-school boom box to get a party started. Everyone is bound to get in the groove and show off their moves during this awesome rock ‘n’ roll bash.

Super Hero Encounters – For the first time, citizens of Earth will come face-to-face with tree-of-few-words Groot, one of the Guardians of the Galaxy! They may also encounter the First Avenger, Captain America, and everyone’s favorite web slinger, your friendly neighborhood Spider-Man.

For a limited time, guests also will discover more new adventures, exclusive to Summer of Heroes:

Avengers Training Initiative – Black Widow and Hawkeye assemble young recruits for a series of tests to see if they have what it takes to join the ranks of the Avengers.

Heroic Encounter: Black Widow – Black Widow will arrive on the scene several times throughout the day in an armored Avengers vehicle for her heroic encounter with park guests.

Grab a Piece (or Bite) of the Action – Special themed merchandise and food will be available throughout Hollywood Land.

The summer brings more excitement at Disneyland Park, too, with the return of the Disneyland Railroad and Rivers of America attractions, including the “Fantasmic!” nighttime spectacular returning later this summer. Dates for the return of these classic attractions will be announced soon. The last chance for guests to enjoy the classic Main Street Electrical Parade during its limited-time return to Disneyland will be Sunday, June 18.

Joe Kleimanhttp://wwww.themedreality.com
Raised in San Diego on theme parks, zoos, and IMAX films, InPark's Senior Correspondent Joe Kleiman would expand his childhood loves into two decades as a projectionist and theater director within the giant screen industry. In addition to his work in commercial and museum operations, Joe has volunteered his time to animal husbandry at leading facilities in California and Texas and has played a leading management role for a number of performing arts companies. Joe previously served as News Editor and has remained a contributing author to InPark Magazine since 2011. HIs writing has also appeared in Sound & Communications, LF Examiner, Jim Hill Media, The Planetarian, Behind the Thrills, and MiceChat His blog, ThemedReality.com takes an unconventional look at the attractions industry. Follow on twitter @ThemesRenewed Joe lives in Sacramento, California with his wife, dog, and a ghost.
Share
Facebook
Twitter
Linkedin
Email
Print
WhatsApp
Pinterest
ReddIt
Tumblr
Previous articleOcean Park Brings a New Way to Enjoy Food and Entertainment When Guests Chill Out @ The South
Next articleMagic Kingdom’s New Nighttime Spectacle Celebrates “Happily Ever After”