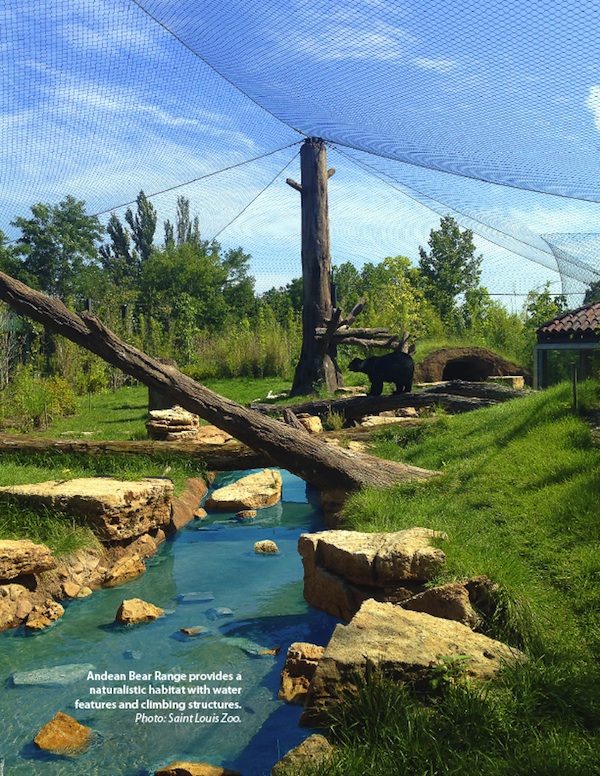 In 2007, the Saint Louis Zoo mounted a $120M capital campaign, setting in motion a series of major changes and expansions, unfolding through 2017. A 10-year rollout is nothing unusual for this prestigious, Association of Zoos and Aquariums-accredited zoo, where large-scale changes entail a lengthy journey from visioning and master plan, through fundraising, bidding, fine-tuning and construction.

Saint Louis-based JCO was awarded the planning, design and execution contract for three projects at the Zoo. The 10-acre River’s Edge, reconfigured with three new animal habitats, opened in June 2014. The revamp of The Living World welcome center has gradually uncapped new features including retail, food, cinema and classroom space. And the original Elephant House (circa 1918) – it hasn’t housed elephants in many years but served a range of other purposes – reopened in 2008 as Peabody Hall, a dedicated, 5,000-square-foot space for traveling exhibitions.

JCO founder Jumana Brodersen, a former creative director with Busch Entertainment Corp. (now SeaWorld Parks & Entertainment) put all her professional background, and her company’s skillset, into play for these projects. From her years with Busch, she had gained the operator’s perspective along with the ability to design for people, animals and exhibits, and the ability to reconcile vision with the realities and challenges of budget, timeline and construction. These combined with her knack for envisioning a creative solution beyond the initial expectations and getting others to see it, too.

“What’s ultimately the goal of this project? What is the essence of this project? If this project were a 30-second commercial, what would it be? You go back to the parameters,” says Brodersen. “For River’s Edge, the goals included more animals, enriched animal habitats and enhanced guest experience, as well as improved animal care, infrastructure and operational efficiency.”

“River’s Edge is this big, immersion exhibit with a loop trail,” said David McGuire, AIA William Bernoudy Vice President Architecture and Planning, Saint Louis Zoo. “The donut hole in the middle was where we planned upgraded facilities for Andean Bear Range. We also wanted to expand the Sun Bear Forest, with space to build out for one more animal in the future. Being in the business as long as she has, Jumana recognized how to make the process more efficient at the front end. She was instrumental in helping us make the leap to go outside the original plan.”

Collaborating with Zoo executive staff including McGuire and Jack Grisham, Vice President, Animal Collections, the team exceeded original goals for populating River’s Edge with more animals – adding the new Purina Painted Dog Preserve – and realizing capital and operating cost efficiencies by supporting all three exhibits with one shared, main animal management area. A bonus result was that the Red Pandas, which had been behind the scenes at the Zoo, were relocated to the former Sun Bears area, coming into public view for the first time in their new, larger habitat. 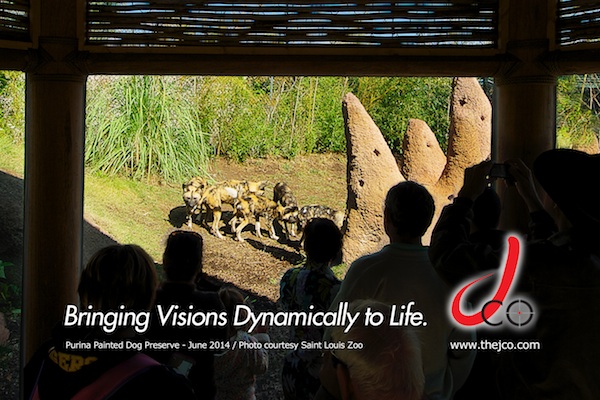 Collaboration of this kind is key to keeping things fresh at the Saint Louis Zoo. “It serves an institution best to work with a variety of design professionals who have animal experience as well with strong support teams to bring fresh approaches to this unique business,” says McGuire.

The Living World and Peabody Hall

“The client’s goal for The Living World was to create a 21st Century zoo arrival experience to start visitors off right, and create positive first impressions,” said Brodersen.

The Living World occupies a 40,000-square-foot building at the north entrance of the Saint Louis Zoo, brings together many elements for welcoming and serving the homo sapiens who visit. An important aspect is the completely redesigned Welcome Center, where Zoo staff help guests plan their visits and purchase tickets. There are also expanded retail and food offerings, special events space, classroom space, the Monsanto education gallery, and digital cinema, plus offices for Human Resources, Marketing and Education.

Some design reconfigurations were implemented when an analysis of guest numbers showed the likelihood of a crowd-flow bottleneck at the entrance, and questions came up about the accommodations for traveling exhibitions.

The exhibition hall was relocated to the former Elephant House, now completely renovated as Peabody Hall. “Having the traveling exhibition space at the front gate was not ideal, and Jumana helped us realize that,” said McGuire. This, in turn, solved the bottleneck issue, freeing up 4,000 square feet at The Living World entrance and facilitating the design of a truly inviting orientation space that does full justice to one of Brodersen’s favorite phrases: “a sense of arrival.”

In collaboration with OWH Architects, JCO delivered an interior renovation of The Living World that is versatile, accessible and airy, and expected to be fully complete by the end of 2014.

The Florida Aquarium in Tampa brought in JCO for a boutique project: Journey to Madagascar, a new themed, immersive environment on its upper level. Ring-tailed lemurs are the stars of the show, with supporting exhibits of amphibians and insects also from Madagascar. JCO’s design scope included the public spaces and the holding areas, collaborating closely with Director of Exhibits & Graphic Design Pete Colangelo, and the animal care specialists at the Aquarium. “Because of the animals’ specific needs in terms of space, feeding, care and comfort when they are out of public view, designing the holding areas can be a more intricate task than designing the guest areas,” noted Brodersen. Journey to Madagascar opened in spring 2014.

For the Missouri Botanical Garden (MOBOT) in Saint Louis, JCO was awarded (via RFP process) the contract to re-imagine the Brookings Interpretive Center, an existing 4,500-square foot building adjacent to the Climatron, a tropical greenhouse and guest favorite especially during the colder months. Expected to open in late 2015, the Center is being gutted and updated with a spread of educational exhibits and interactives designed to extend exploration and learning. “The new, family-friendly, digitally-equipped, year-round space will be configurable for multiple purposes,” says Brodersen. “Being among the plants at the Garden evokes a sense of beauty and curiosity. The Center will augment that with relevant, changing themes and programs networked to the larger community. Guests will have many options to actively participate and create their own content.” Brodersen is working closely with MOBOT’s internal engineering and education departments on the project.  • • •

Judith Rubin
Judith Rubin ([email protected]) is a leading journalist, publicist, strategist, blogger, content marketing specialist and connector in the international attractions industry. She excels at writing about all aspects of design and technical design, production and project management. Areas of special interest include AV integration and show control, lighting design and acoustics, specialty cinema, digital video and world’s fairs. Judith has ties to numerous industry organizations. From 2005-2020 she ran communications, publications and social media for the Themed Entertainment Association (TEA). In 2013, she was honored with the TEA Service Award. She was development director of IMERSA, and co-chair of the 2014 IMERSA Summit. She was publicist for the Large Format Cinema Association in the 1990s, now part of the Giant Screen Cinema Association (GSCA) and has also contributed to the publications of PLASA, IAAPA and the International Planetarium Society. Already making her mark as a magazine and book editor, Judith joined World’s Fair magazine in 1987, which introduced her to the attractions industry. Launching as a freelancer in the mid 1990s she has contributed to dozens of publications and media outlets including Funworld, Lighting&Sound America, Sound & Communications, Urban Land, The Raconteur and The Planetarian. She joined InPark in 2010. Judith earned a Bachelor of Fine Arts from Pratt Institute. She has lived in New York City and the San Francisco Bay Area, and now makes her home in Saint Louis, where she is active in the local arts and theater community.
Share
Facebook
Twitter
Linkedin
Email
Print
WhatsApp
Pinterest
ReddIt
Tumblr
Previous articleOriental Land Company Announces $4.5 Billion in Enhancements and Expansions at Tokyo Disney Resort
Next articleGantom Lighting, Formerly Darklight, Will Showcase New Items at LDI