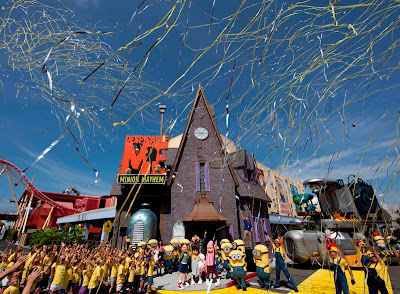 Based on the Universal Pictures and Illumination Entertainment film Despicable Me, the ride was created by Universal Orlando in partnership with Chris Meledandri, founder and CEO of Illumination, and his filmmaking colleagues. The ride places guests in the midst of an original adventure that combines a new storyline, new animation, and the latest 3-D technology.

Guests will meet their favorite characters from the film – all voiced by the original cast: Gru (Steve Carell), the “world’s greatest super-villain,” and his daughters Margo (Miranda Cosgrove), Edith (Dana Gaier) and Agnes (Elsie Fisher). They will enter the ride through the towering façade of Gru’s house, pick up 3-D “minion goggles” in his living room and be scanned for “human germs” in the Minionization Prep Room. Gru is working on something “really big” and recruits guests for the job, transforms them into minions and sends them off for minion training. From there, guests go on a wild ride where they evade water sprayers, giant flyswatters, anti-gravity rooms and more.

“We worked to blend the spirit and heart of the film with a great new adventure for our guests and their families,” said Mark Woodbury, president of Universal Creative. “Where else can your family laugh, dance, celebrate and become a minion all at the same time?”

“We’re so excited to introduce an entirely new experience that truly captures all the heart, humor and emotion audiences have come to love about Despicable Me,” said Meledandri. “Fans of the film can now have fun and interact with their favorite Despicable Me characters in a way they haven’t been able to before.”

The attraction’s grand opening caps Universal Orlando’s “Year to be Here” – during which Universal debuted more new entertainment experiences across its entire destination than any other year in its history. Despicable Me Minion Mayhem follows the debut of a newly-enhanced Blue Man Group Show at Universal CityWalk, the high-tech re-launch of The Amazing Adventures of Spider-Man at Universal’s Islands of Adventure and the spring openings of Universal’s Superstar Parade and Universal’s Cinematic Spectacular – 100 Years of Movie Memories at Universal Studios Florida.

About Universal Orlando Resort
There are many ways to enjoy your Orlando vacation, but there is only one place where vacation becomes adventure: Universal Orlando Resort. It is a unique destination featuring two theme parks, three magnificently themed on-site hotels and a nighttime entertainment complex. It’s the only Orlando destination where you are not just entertained – you become part of the most exhilarating entertainment ever created. You can soar above Hogwarts with Harry Potter, swing above the streets with Spider-Man, battle aliens alongside Agent J, and help Shrek save Princess Fiona in Shrek 4-D. Now open: Despicable Me Minion Mayhem.

Universal Orlando Resort is an NBCUniversal company one of the world’s leading media and entertainment companies.

Joe Kleimanhttp://wwww.themedreality.com
Raised in San Diego on theme parks, zoos, and IMAX films, InPark's Senior Correspondent Joe Kleiman would expand his childhood loves into two decades as a projectionist and theater director within the giant screen industry. In addition to his work in commercial and museum operations, Joe has volunteered his time to animal husbandry at leading facilities in California and Texas and has played a leading management role for a number of performing arts companies. Joe previously served as News Editor and has remained a contributing author to InPark Magazine since 2011. HIs writing has also appeared in Sound & Communications, LF Examiner, Jim Hill Media, The Planetarian, Behind the Thrills, and MiceChat His blog, ThemedReality.com takes an unconventional look at the attractions industry. Follow on twitter @ThemesRenewed Joe lives in Sacramento, California with his wife, dog, and a ghost.
Share
Facebook
Twitter
Linkedin
Email
Print
WhatsApp
Pinterest
ReddIt
Tumblr
Previous articleESPA Flagship Opening at Resorts World Sentosa
Next articleGeorge Wiktor of The GW Group to Speak at SATE 2012