by Bayley Silleck
Originally published in Issue #19 of InPark Magazine.

Fulldome projection uses edge- blended projectors or even a single, fisheye lens unit to project digital content onto a dome screen. In the decade or so since fulldome was introduced, this immersive format has transformed the way planetarium shows are produced and the number of installations has grown to nearly 400.

Soon after IPM Magazine asked me to investigate the world of fulldome production, I found myself sprawled out on the floor in the pitch-dark. A tall, gangly figure loomed in my field of view. I had a brief flashback to the years I lived in London – could this be Dr. Who, the British television wizard, come to re-ignite my energy field, rescue me from shape-shifting aliens, or transport me to other worlds? 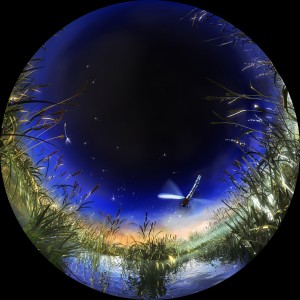 Despite the flowing mane of Sixties- style hair, the multiple strands of African glass-bead necklaces, and the long silk scarf, this was a new, very modern breed of wizard, whose wand is a mouse and whose lab is a digital dome. It was Carter Emmart, director of astrovisualization for the Hayden Planetarium at the American Museum of Natural History in New York City. In his arms was a rolled-up carpet.

Carter was indeed there to transport me to other worlds. He unrolled the carpet and bade me climb aboard.

All at once, I was floating in space, looking upon the Earth as it was just a couple of hours before, recorded by the MODIS sensor on the Terra satellite, downlinked to NASA/ Goddard, fed to JPL’s World Wind interactive global viewing software and compiled at JPL into an evolving, high resolution, color global mosaic called the Daily Planet, then sent out over the Internet to be downloaded and projected on the Hayden’s 69- foot-diameter fulldome digital video presentation system. I glanced over to see Carter, dimly visible in the glow of a computer monitor, with what might have been a maniacal grin on his face.

“OK,” he yelled out, “this is what I call ‘the Powers of Ten with a steering wheel.’ Here we go!”

Earth dropped away and the moon sped past. We rose up out of the solar system, zoomed past Alpha Centauri, then left the Orion Arm of the Milky Way and flew past the Andromeda Galaxy. Now every point of light was an entire galaxy. Soon they coalesced into ineffably gigantic clusters and super-clusters of galaxies. Then we stopped, with the visible universe spread out before us.

“Yeah,” Carter exulted, “that was 25 orders of magnitude on steroids!”

I knew Carter was playing with my head. In 1996, I directed a large- format film titled “Cosmic Voyage,” which featured a cosmic zoom through the universe. Like the classic Eames/Morrison film “Powers of Ten,” it was based on the wonderful 1957 Dutch schoolbook “Cosmic View,” by Kees Boeke. “Cosmic View” created a powerful new paradigm for understanding our place in the Universe by first widening, then narrowing our view of a simple scene – a girl in a chair in the schoolyard – by orders of magnitude.

But Boeke would have been simply blown away by what Carter and his colleagues at the Hayden – as well as increasing numbers of their peers at other companies and institutions – can now do with this concept. They can “drive” their domes and audiences almost anywhere in the universe, at any speed, and do it differently each time. What they are actually doing is real-time navigation of Digital Universe, a three-dimensional, digital database. A given trip through the dbase can be recorded via real- time scripting software, and played back at will. The leading fulldome systems are Evans & Sutherland Digistar 3, Spitz SciDome, and Sky- Skan definiti; however, there are numerous other providers including RSA Cosmos, Zeiss, GOTO, Barco, Konica Minolta, Elumenati, Digitalis, e-Planetarium, Swinburne and Learning Technologies. The AMNH/ Hayden group recently used Uniview visualization software to script and produce its 20-minute “Field Trip to the Moon.” Creating a show in this way costs a fraction of what it costs to produce a giant-screen film. Both dbase and show can be ceaselessly updated as astronomers continue to unlock the secrets of space.

Lying there on Carter’s magic carpet, I was impressed by what it is now possible to capture and at how much less expense. Cosmic Voyage had certainly broken new ground in presenting digital visualizations of outer space on giant-screen film, but it had taken a long time and a lot of money to achieve. And, as a film, it may be immortalized but it is definitely not easy to update. But in 1995 I had had a glimpse of this near-future. On our Cosmic Voyage CG team were Donna Cox and Bob Patterson of the National Center for Supercomputing Applications in Champaign, IL. They had begun experimenting with an immersive system called Virtual Director, a kind of space-flight simulator. Their work, along with that of Hayden scientists, Swedish grad students, and many others to combine the Hayden’s own “Digital Universe” with static, academically-compiled astronomical data sets like the Tully and Sloan Digital Sky Surveys, presaged the real-time interactive visualization technologies that are being used to create today’s fulldome fly- throughs.

Recently, Carter visited a school in Cambodia, opened his laptop, and logged onto the Hayden website. In a few minutes, with a few mouse-clicks, he and the Cambodian students were “driving” the big planetarium dome in New York from half a world away. With a Skype hookup, they could also talk to the audience at Hayden, make joint decisions on what galaxies to fly through, and discuss what they saw.

There’s also a lot of buzz about “dome-casting.” I chatted about its possibilities recently with David Beining of the Lodestar Astronomy Center at the University of New Mexico, Albuquerque. “If a dome theater has booked a famous lecturer,” posits Beining, “they could link up with others and share that lecture and its associated real-time, interactive imagery with many other domes, small and large.”

Combining the powers of the Internet and the immersive digital dome (not to mention the ever-growing power and naturalism of CGI) conjures up exciting new possibilities for science education.

In addition to what’s possible with the real-time, database fly-throughs, all fulldome packages have playback systems for exhibiting pre-rendered shows. There’s a growing library of these shows, created on a common Domemaster format so that any pre-rendered fulldome show can be played back on any fulldome system.

According to Jeri Panek, director of sales for Evans & Sutherland, the fulldome revolution really started to roll in 2002 – when the first fulldome systems capable of showing both real-time and pre-rendered CGI color graphics – such as E&S Digistar 3 – were introduced and demonstrated at the International Planetarium Society (IPS) conference in Wichita, KS. Both E&S in Salt Lake City and its wholly owned subsidiary, E&S Spitz in Chadds Ford, PA, are prolific producers of fulldome shows.

While planetariums are currently the chief market, fulldome can take an audience to other places besides space. As Paul Tetu, sales & systems specialist, Sky-Skan, points out,“There is an expanding amount of non-astronomy content available. Sky-Skan has been demonstrating molecular models in real-time for several years. Some of our clients have been using their systems to visualize physics and biology concepts.” In fact, these planetarium geeks are creating shows depicting weather, ancient Greece and Egypt, the human body, molecules, the sinking of the Titanic, pop music and just plain art.

“There is more non-astronomical content now, but still not as much as I’d like to see,” says David Beining, who also runs the annual DomeFest, a showcase of fulldome shows and art projects. The next DomeFest will take place in Chicago July 3, immediately following the IPS meeting at the Adler Planetarium, June 27-July 2. Another opportunity to experience the medium is the E&S Spitz Fulldome Showcase at the annual meeting of ASTC, this year in Philadelphia Oct. 18-21.

Production of these shows is still overwhelmingly in the digital realm. It is possible to shoot live-action film and transfer it to digital, but there’s still no live-action digital movie camera capable of capturing a sufficiently high-res image for fulldome display. Fulldome producers aren’t (yet) sending cameras up in the Space Shuttle, to the top of Everest, or across the Gobi Desert. Budgets for pre-rendered shows (which may employ sizable teams of artists and render farms) range from about $200,000 up to the seven- figure stratosphere of the Hayden Planetarium’s three productions to date. According to Tetu, most pre-rendered shows land in the $400,000-$500,000 range, whereas real-time shows can be produced at much lower cost, often just the cost of the time required to program them.

Fulldome systems are facilitating a kind of democracy for educational institutions in terms of presentation and affordability. Systems come in all sizes and all budgets. They can all make use of the same library of pre-rendered content. Relatively low costs enable many venues to produce their own shows. Most existing fulldome systems are in domes 40- feet in diameter and smaller, with a significant number in the 50-foot range and a few at the 70-foot rank. On the grand scale are such venues as the Samuel Oschin Planetarium at Griffith Observatory in Los Angeles (76-foot dome with E&S Digistar 3), and the Albert Einstein Planetarium at the National Air and Space Museum in Washington, DC (70-foot dome with Sky-Skan definiti). The Hayden likes to stay on the cutting edge and its current custom configuration includes a Nvidia PC cluster for real-time interactivity, a playback system from Global Immersion and an array of Projection Design f-30 DLP projectors. The many smaller planetariums and theaters with fulldome systems installed include the 31-foot dome of the Neil Armstrong Planetarium at Altoona Area High School in Altoona, PA and 40-foot Travelers Science Dome at the Gengras Planetarium of the Children’s Museum in West Hartford, CT (both Spitz SciDome systems). In addition, schools and educational institutions are purchasing portable domes that use fulldome systems. Mike Bruno, creative media director of E&S Spitz, estimates the current total number of installed fulldome systems is close to 400. Beining says it’s about 375. That total could reach 600-800 within a few years.

“This is an exciting time for the fulldome industry,” says Jeri Panek. “With the wide variety and number of shows being created for this medium, it is sure to become a major player in the educational, entertainment, and film markets for many years to come.”

I believe the democracy of the dome will become even more widespread than we can now imagine. However it unfolds, it’s going to be good news for the future of science education.

Bayley Silleck has been directing, writing, and producing documentary films since 1973. In recent years, he has directed and/or produced seven giant-screen films, including Cosmic Voyage, which received an Academy Award nomination in 1997, and was commissioned by the Smithsonian’s National Air and Space Museum. He is a voting member of the Academy of Motion Picture Arts and Sciences and serves as a screening committee member of the Documentary Branch. His most recent giant-screen films are Wired to Win: Surviving the Tour de France (2005) and Dinosaurs Alive 3D (2007).