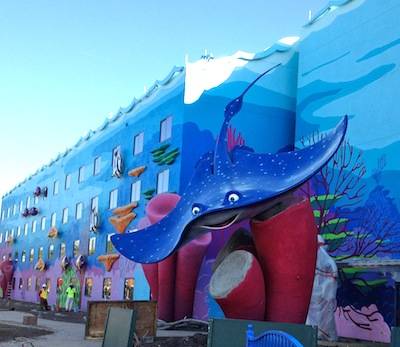 Lake Buena Vista, FL, USA — The wings dedicated to the popular films featured at Disney’s Art of Animation Resort will now be opening than sooner than expected after the resort hotel’s grand opening May 31.

“We are excited that the Cars, The Lion King, and The Little Mermaid wings at Disney’s Art of Animation Resort will all open earlier than we originally planned, bringing more permanent resort jobs to Central Florida sooner,” said Kevin Myers, vice president of resort operations for Walt Disney World Resort. “Demand for family suites exists in the marketplace today and the new opening dates reflect how optimistic we are about tourism in Central Florida.”

The Finding Nemo wings of the resort will open May 31; Cars will now open June 18 instead of July 31; The Lion King will open August 10 instead of September 30. The value rooms at The Little Mermaid wings on September 15 instead of at the end of this year.

The Lion King, Cars and Finding Nemo buildings will be entirely family suites, with 1,120 suites between them. The Little Mermaid buildings will feature 864 rooms in the “value” room category.

The construction of family suites at Disney’s Art of Animation Resort is an innovative approach to a changing marketplace. Today more and more multi-generational families are traveling together for various celebrations, including family reunions. These families not only want to play together, they want to stay together, which has created tremendous demand for family suites.

Also, as Guests move from the check-in area to Merchandise and Food & Beverage locations, Cast Members in those locations will be wearing colorful costumes that represent the color being added to animation.

Joe Kleimanhttp://wwww.themedreality.com
Raised in San Diego on theme parks, zoos, and IMAX films, InPark's Senior Correspondent Joe Kleiman would expand his childhood loves into two decades as a projectionist and theater director within the giant screen industry. In addition to his work in commercial and museum operations, Joe has volunteered his time to animal husbandry at leading facilities in California and Texas and has played a leading management role for a number of performing arts companies. Joe previously served as News Editor and has remained a contributing author to InPark Magazine since 2011. HIs writing has also appeared in Sound & Communications, LF Examiner, Jim Hill Media, The Planetarian, Behind the Thrills, and MiceChat His blog, ThemedReality.com takes an unconventional look at the attractions industry. Follow on twitter @ThemesRenewed Joe lives in Sacramento, California with his wife, dog, and a ghost.
Share
Facebook
Twitter
Linkedin
Email
Print
WhatsApp
Pinterest
ReddIt
Tumblr
Previous articleWarm Weather Means Early Start to Wisconsin Dells Attractions
Next articleUrban Renewal: City of Saint Louis studies downtown freeway removal options