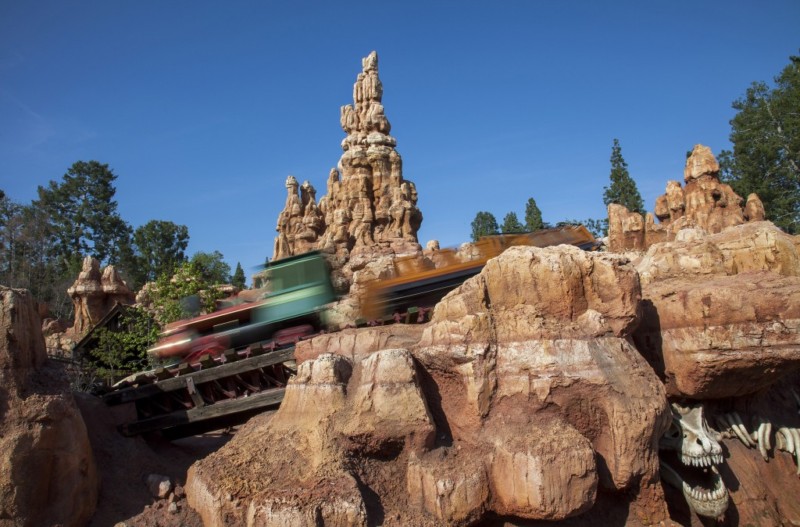 Anaheim, CA, USA — The wildest ride in the wilderness reopens March 17 with an upgraded track, restoration of the historic Rainbow Ridge Mining Town, new paint on portions of the mountain and updates to the train vehicles. Guests taking a ride on this runaway mine train will discover some new surprises, too.  Along with the new track, Big Thunder Mountain Railroad reopens in 2014 with an enhanced audio system that sharpens the sounds heard by guests on the trains and in the caverns and buildings and a newly “explosive” projection mapped finale.

— Big Thunder Mountain Railroad celebrated its grand opening in September 1979, becoming the third peak in the Disneyland Park “mountain range of thrill rides.” It was preceded by Matterhorn Bobsleds (1959) and Space Mountain (1977) and followed by Splash Mountain (1989).

— The attraction’s setting evokes 19th century gold-mining territory, with rugged bedrock and desert cactus. Guests board a mine train for a thrilling, high-speed adventure past the spires and buttes of the old West and into the tunnels and shafts of a dark and mysterious mine.

— Since its opening in 1979, Big Thunder Mountain Railroad at Disneyland has carried more than 225 million guests who are warned to “hold onto your hats and glasses” as they prepare to dip and drop into the canyons and caves of the Big Thunder ghost town.

— Objects that may be spotted by guests in and around Big Thunder Mountain include a century-old stamp mill, hand-driven drill, press gears, picks shovels and other artifacts acquired from abandoned mines in Nevada, Colorado, Minnesota and Wyoming, as well as museums and swap meets.

— Subsequent versions of the attraction appeared in Magic Kingdom Park, Walt Disney World, Florida in 1980; Tokyo Disneyland Park in 1987 and Disneyland Paris in 1992.

— The miniature town of Big Thunder, seen at the end of the attraction, first appeared in 1956 as part of the Rainbow Cavern Mine Train and Mine Train through Nature’s Wonderland attractions. Many Disneyland fans still call it by its original name: Rainbow Ridge. The town is said to have been a favorite of Walt Disney, who built miniatures himself as a hobby.

— Other items from the Nature’s Wonderland days include the caves of Rainbow Caverns, the rockwork buttes at the entry to Balancing Rock Canyon, and some of the animals – the dynamite-devouring goat, coyotes, possums, snakes, turtles, vultures – who appear among the rocky cliffs surrounding the mine tunnels.

Joe Kleimanhttp://wwww.themedreality.com
Raised in San Diego on theme parks, zoos, and IMAX films, InPark's Senior Correspondent Joe Kleiman would expand his childhood loves into two decades as a projectionist and theater director within the giant screen industry. In addition to his work in commercial and museum operations, Joe has volunteered his time to animal husbandry at leading facilities in California and Texas and has played a leading management role for a number of performing arts companies. Joe previously served as News Editor and has remained a contributing author to InPark Magazine since 2011. HIs writing has also appeared in Sound & Communications, LF Examiner, Jim Hill Media, The Planetarian, Behind the Thrills, and MiceChat His blog, ThemedReality.com takes an unconventional look at the attractions industry. Follow on twitter @ThemesRenewed Joe lives in Sacramento, California with his wife, dog, and a ghost.
Share
Facebook
Twitter
Linkedin
Email
Print
WhatsApp
Pinterest
ReddIt
Tumblr
Previous article
The Role of the Commissioner General in US Expo pavilions
Next article
Shedd Aquarium Welcomes Newest Rescue Dog as Aquarium Amabassador