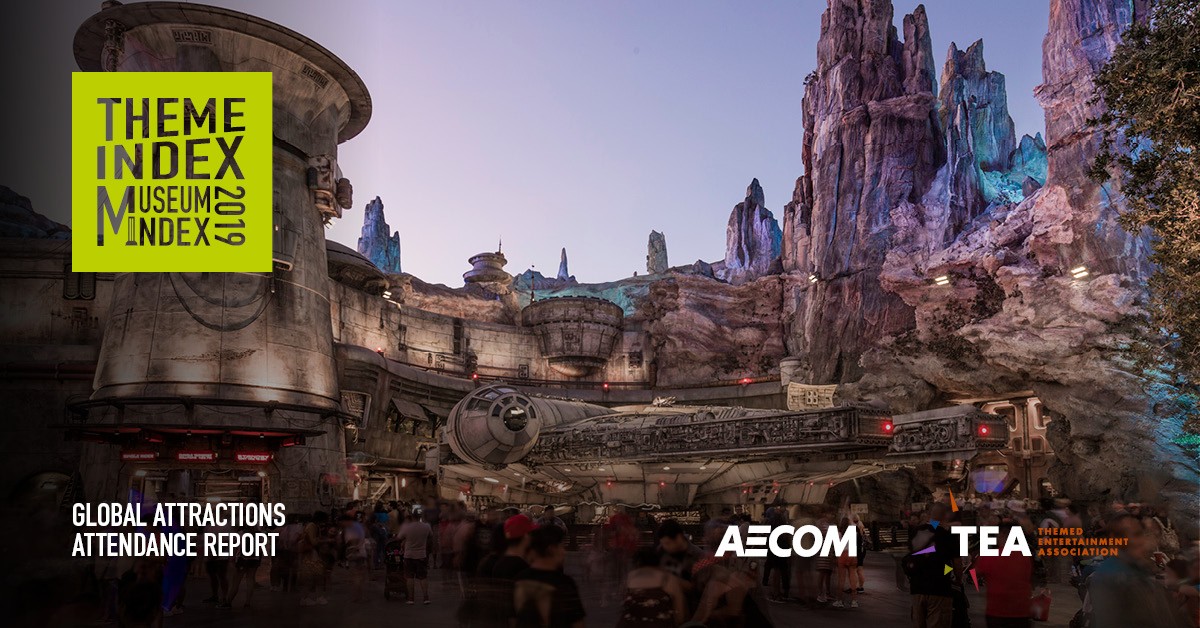 What can a decade of industry evolution tell us about the future?

The Themed Entertainment Association and AECOM have jointly published the 14th edition of the TEA/AECOM Theme Index and Museum Index, showing global attendance trends for calendar year 2019 in the world’s top theme parks, waterparks, and museums. InPark dives into a decade’s worth of the report (2009-2019) to find patterns that point to future trends.

The year 2009 was the final year of the three-year Great Recession, marked by a real estate bubble burst and global economic crisis. During this period, people vacationed closer to home. As the 2009 TEA/AECOM report pointed out, lower-cost regional parks and attractions, including museums and zoos, tend to fare better as discretionary spending declines during tighter economic periods. During the Great Recession, travel destinations felt the pinch and worked to cultivate their regional markets. As stated in the 2009 TEA/AECOM Theme Index: “Destination parks rely on a combination of tourists and locals, but in 2009 had fewer of the former coming through the turnstiles: total visitation to Orlando in 2009, for instance, was down 9 percent. Destination parks endeavored to offset the lower levels of tourism by encouraging regional attendance and repeat visits through special programs, passes and discounts.”

Regional and destination parks have always taken cues from one another. And in downturns and crises, industries learn, then apply the lessons to benefit in the recovery. Between 2009 and 2019, we saw destination parks work to get closer to local audiences, and regional parks adopt season extensions, resort models and multiple gates.

Around the world, regional parks that previously were open only during peak summer season have been extending their operating calendars with seasonal events such as Halloween and the winter holidays, often adding significantly to yearly attendance totals.

In the 2019 Theme Index, every one of the top 25 theme parks worldwide – whether traditionally considered destination or regional – featured at least one attached hotel. With hotels being built at regional parks, what once was considered a single- day outing now becomes a multi-day visit. The desire to keep guests on property has resulted in parks transitioning into fully integrated resorts, with the addition of retail and dining districts, sporting facilities, waterparks, and, in some instances, additional theme parks.

A new era of branded and IP-based attractions

Throughout the Great Recession, Universal Parks and Resorts continued construction on what became a major game-changer for the industry. Originally scheduled for 2009 and finally opened in 2010, the Wizarding World of Harry Potter at Universal’s Islands of Adventure heralded the beginning of an emphasis on new themed lands and attractions centered around existing and custom brands. The use of brands and IP in themed entertainment has attained new levels on both regional and destination platforms around the world. Disney’s Cars Land, Pandora, and Star Wars: Galaxy’s Edge, along with global expansions of Universal’s Wizarding World of Harry Potter, were joined by SeaWorld’s Antarctica, Six Flags’ Justice League, and new parks in Dubai with lands themed to a variety of licensed studio franchises.

From WWOHP in 2010 to Star Wars: Galaxy’s Edge in 2019, the decade represented a grand new era of branded attractions. What does the IP crystal ball hold for the next decade?

Within the themed entertainment community, the term “LBE” is again a buzzword. Location Based Entertainment refers to out-of-home entertainment experiences usually of a scale smaller than a theme park – waterparks, family entertainment centers, virtual arcades, pop-ups of various kinds, themed hospitality… LBE-scale concepts have been popular in recent years as more and more IP owners set up verticals to explore opportunities in the space. The popularity of the smaller, scalable, LBE-style approach may well increase as theme parks hit a fiscal setback over the next few years due to a combination of COVID-19 closures and attendance reduction mandates. Instead of large- scale lands, it may be more common to see mini-themed lands, with a single ride, retail store, and eatery. Working from another facet of LBEs, theme parks might also install thematic overlays of existing attractions, reducing the costs necessary for a complete infrastructure overhaul.

Over the decade, as IP holders have become more cognizant of the value of their holdings and their potential in themed entertainment platforms, a holistic model has emerged. Those theme parks attached to a studio have a ready-made base of IP to work with, one that has continually grown as the studios acquired new production companies and franchises. Others will continue to license from outside sources, resulting in the sharing of a single franchise over a number of parks in varying global markets. This approach has proven successful for IP holders such as Peanuts Worldwide, Cartoon Network, Warner Bros., Ferrari, Lionsgate Entertainment and others.

In 2009, attendance for the top 25 theme parks worldwide was 185.6 million. By 2019, the top 25 parks saw attendance of 253.7 million, an increase of 68 million, or 73% over the decade. Attendance at the top 20 waterparks worldwide in 2009 was 20.7 million. In 2019, it was 31.1 million, a growth of 10.4 million or 67%. While attendance has fluctuated over the years primarily due to global and regional economic factors, continued investment in large scale attractions and theme lands has paid off for the highest attended parks. New blockbuster branded parks, such as Chimelong Ocean Kingdom in Zhuhai China and Universal’s Volcano Bay, have also seen and sustained strong attendance.

Getting back to business

It should be noted that 2019 marks the last year of a growth curve, mitigated by the rise of the COVID-19 pandemic. Although the virus was first reported to the World Health Organization in late December, 2019, it was on January 20, 2020, when the Chinese government declared coronavirus to be a Class 1 mass outbreak, that the first wave of venue closures began.

Prior to the Great Recession that ended in 2009, the industry experienced a major downturn in the months after the September 11 terrorist attacks of 2001. It took time before people were comfortable getting out of  their homes and into attractions again. Two decades later in the worldwide pandemic of 2020, the situation is different, because the type of safety threat is different. Those able to re-open are now operating with attendance caps and limited offerings.

In the current edition of  the TEA/AECOM Theme Index, John Robinett, Senior Vice President, Economics, AECOM writes: “The general sentiment is that with new health and safety measures, many attractions will be able to get back to business this year (although at a different level). Some are predicting 30.0% to 50.0% of normal business volume for the coming months, and surveys show positive demand from the market. However, it may take one to several years to return to pre-COVID operating levels, and the investment horizon of many owners may be altered due to cash flow loss.”

Regional and destination theme parks will move toward recovery as best they can, looking for ways to welcome guests and enable them to gather safely, while maximizing revenue opportunities. As major new attractions, rides, and museum exhibits are pushed back or cancelled, we are seeing short-term replacements such  as food festivals and other low-cost special events where social distancing can be maintained. This increased reliance on festivals has already become a mainstay for both regional and destination theme parks as the emphasis has transitioned from daily ticket sales to annual and season pass holders, with a need to ensure passholder retention.

In 2009, nine of the top 25 theme parks worldwide were in Asia. By 2019, 12 Asian parks had made the list. All of the top 20 Asian parks listed within the 2019 Theme Index lie within four countries – Japan, China (including Hong Kong), South Korea, and Singapore. The two parks of the Tokyo Disney Resort occupy the top two positions, Universal Studios Japan sits in third. A dramatic change is the ascension of Chimelong Ocean Kingdom, now the top-attended theme park in all of China.

Chris Yoshii, Vice President – Economics, Asia Pacific and Beth Chang, Executive Director – Economics, Asia Pacific for AECOM have been the APAC voices in the Theme Index for many years. In the current report, they write of Chimelong Ocean Kingdom, “Its 11.7 million visits in 2019 reflect an 8.4% increase from the prior year, coming in about 500,000 higher than Shanghai Disneyland, which saw a slight attendance drop as it focuses on implementing a yield strategy.”

Another dramatic rise is that of OCT Group, which in 2019 became the third-largest theme park operator in the world, bumping Universal to fourth place on the top 10 list in the 2019 TEA/ AECOM Theme Index. Regional park attendance in China, the world’s most populous nation, continues to grow, where over one hundred Chinese cities have urban populations of one million or more.

This trend was anticipated in the 2009 Theme Index, which presented Asia as “the major growth region now and in the future” although in 2009, a year of recession, total attendance for the Asian top 15 parks was 77.6 million, down frm just under 80 million the previous year. The report cited numerous new parks in the pipeline and the expectation “that Asia will rebound quickly and continue as the main growth engine for the industry led by China.” Beijing and Shanghai in particular as well as Southern China were cited as key strategic markets and it was anticipated that the region could support multiple theme park destination developments.

These forecasts have been borne out. Total attendance for Asia’s top 15 in 2019 was 141.2 million, nearly double the 2009 figure. Yoshii and Chang write in the 2019 Theme Index: “The most dramatic increases were in China. Theme parks, water parks and park operators in China showed strong attendance growth across the board, with some dramatic shifts in rank, globally and regionally.”

Growth factors included promotional ticketing and the celebration of the 70th anniversary of Communist China. Contradictory to losses in 2009, the majority of parks in mainland China saw year-over-year attendance growth spurts of 20-30% over 2018. This offset losses at Shanghai Disney, due to the first full year of yield pricing, and the Hong Kong parks, which suffered lower attendance due to political turmoil in the region.

The next few years

David Rosenberg, Vice President of Guest Experience at the Monterey Bay Aquarium and the 2019 Chair of IAAPA, told InPark that he expects operations to eventually return to normal in the global attractions industry. “People like to be together in large groups,” he said in an April interview. “And attractions help bring us together to create memories.”

AECOM’s Robinett expresses a similar thought in the 2019 TEA/AECOM Theme Index, writing, “… the industry has undergone major disruptions before — related to health, safety, economic and security issues. While acknowledging the serious nature and consequences of the current pandemic, history shows us that people’s behavior, with some exceptions, largely returns to normal once the threat is removed. The attractions industry is resilient, creative, and responsive to the needs of its guests. This – combined with the industry’s lasting value of producing family fun, shared experiences, and escape – points to a future of recovery and new innovations as it has in the past.”

One of the great issues with determining the future post-COVID is the uncertainty of what might come. Globally, guidance for reopening operations vary on a national and local level, eliminating standardization in the procedures. What may work in one country due to political or cultural structure, may not in another. For example, while theme park visitors in China must show a QR code on their phone tied in with the national health database to gain entry, such a policy might violate health privacy laws in other parts of the world.

In the short term, expect more festivals, more licensed branding for parks big and small, and an increased emphasis on hospitality offerings, retail and expansions that support multi-day visits and increased per cap spending. Ten years after the Great Recession, worldwide theme park attendance at the top parks increased by 68 million visits. It might take as long for a similar rebound after the COVID-19 pandemic. Then again, it might not. The attractions industry is a growth industry and whenever it dives, it resurges on a scale larger than before. • • •