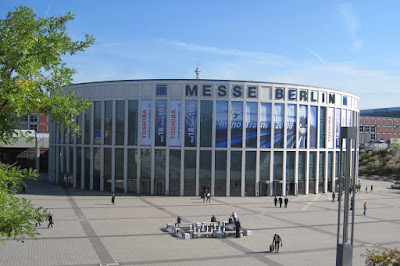 Brussels, Belgium — The Messe Berlin exhibition centre in Berlin, Germany, will host Euro Attractions Show (EAS) 2012, the largest European conference and trade show for the attractions industry, Tuesday, October 9 through Thursday, October 11.  To accomodate the strong demand for exhibit space, EAS officials have opened a fifth hall in Messe Berlin.  EAS is owned and produced by the International Association of Amusement Parks and Attractions (IAAPA).

After last year’s record breaking EAS 2011 in London, United Kingdom, EAS 2012 is on track to once again feature a record-breaking exhibit floor.  More than 320 manufacturers, suppliers, and consultants for the attractions industry have signed up for the event and booked 10 percent more exhibit space compared to the same time last year.
The exhibit floor will showcase innovative products and services in more than 100 categories from more than 100 countries ranging from million Euro rollercoasters to stuffed animals, slushy ice, ticketing systems, water rides, 4D theaters, and much more.
In addition to the exhibit floor filled with new products and services, EAS 2012 offers a variety of special events as well.

The meeting point for exhibitors and attendees will be this year’s Opening Reception on Tuesday, October 9, at the Palais am Funkturm, which is located next to the trade show halls.  More than 1,000 guests will gather at the end of the first day of the show to network, enjoy food, and experience entertainment.
Leadership Breakfast
The CEO’s of two of the biggest theme parks in Europe will share their story about the past, the present, the future, and the green strategy of the two European stars Europa Park and PortAventura.
Roland Mack, Managing Partner Europa Park and Mack Rides and IAAPA Chairman of the Board will be the keynote speaker at this annual Leadership Breakfast and will share his family story of developing an amusement park into a world-class, multi-faceted resort.  Fernando Aldecoa from PortAventura in Spain will join the discussion to share his experiences of taking over and growing the largest amusement park in Spain.
For more information or to register, visit http://www.iaapa.org/europe/en/

Joe Kleimanhttp://wwww.themedreality.com
Raised in San Diego on theme parks, zoos, and IMAX films, InPark's Senior Correspondent Joe Kleiman would expand his childhood loves into two decades as a projectionist and theater director within the giant screen industry. In addition to his work in commercial and museum operations, Joe has volunteered his time to animal husbandry at leading facilities in California and Texas and has played a leading management role for a number of performing arts companies. Joe previously served as News Editor and has remained a contributing author to InPark Magazine since 2011. HIs writing has also appeared in Sound & Communications, LF Examiner, Jim Hill Media, The Planetarian, Behind the Thrills, and MiceChat His blog, ThemedReality.com takes an unconventional look at the attractions industry. Follow on twitter @ThemesRenewed Joe lives in Sacramento, California with his wife, dog, and a ghost.
Share
Facebook
Twitter
Linkedin
Email
Print
WhatsApp
Pinterest
ReddIt
Tumblr
Previous article
Gold Rush in Danish amusement park
Next article
Chance Rides Giant Wheel Newest Highlight of Seattle Waterfront